There’s something about kung fu movies that is polarizing. It’s one of those you either love it or hate it type of genres. Another genre about as polarizing is a very specific branch of the comedy family tree: the lowbrow films.

If you were to create a Venn diagram using these two movie genres, you’d only see a few places where these separate worlds overlap, one of which is the delightfully stupid film, Kung Pow! Enter The Fist. Steve Oedekerk might not be a household name. He might not even be a slummy motel-hold name but he certainly is one thing—a person, with a name.

Whether you’d believe it or not, Oedekerk has actually been around for years and wrote some of the most successful and funny comedies of the early 2000s. Bruce Almighty? Check. Patch Adams? Check. Ace Ventura: When Nature Calls? Check, check, and checkaroonie, mister. 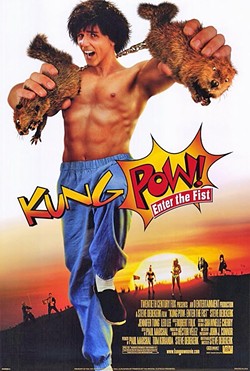 However, Kung Pow: Enter The Fist really set the bar for lowering the bar, which is great because it’s a reminder that people still love lowbrow, as-stupid-as-you-can-get comedy. The film weaves the tale of a child, a prophesied kung fu master called The Chosen One (portrayed by none other than Oedekerk himself), who vows to avenge the brutal murder of his parents. His misadventures take him across miles of desert, into the paths of many fierce enemies, and briefly into the seat of a cherry red 1957 Chevrolet Bel Air convertible.

As an adult and after years of searching, The Chosen One finally learns the location of his parents’ murderer and begins training in an effort to kill him. Kung Pow! Enter The Fist is like the side project that your favorite musician took a break from their band to make, in that, you love to hate it.

There’s a twist, though. Kung Pow! Enter The Fist is actually two movies. Rather, it’s one movie inserted into another, pre-existing movie. Genius, right? Right. The majority of the film is really footage from a 1976 Hong Kong martial arts movie called Tiger and Crane Fist. Oedekerk simply injects several new scenes into the film using a green screen and dubs over all the dialogue with his own.

The mash-up makes for hilarious results as we view scene after scene of what is clearly meant to be a drama but is instead a hilarious mix of intense body language, violence, and the type of humor you’d expect from a 12-year-old boy. The dialogue is especially funny set against the backdrop of rival martial arts gangs. When else would you get to hear the antagonist of a film say, “When you ladies are done kissing I’ve got some ass kicking for you!” Or watch someone fight a cow?

Kung Pow! Enter the Fist is purely an exercise of lowbrow comedy and if you liked films like Pineapple Express, Hot Rod, or Dude, Where’s My Car?, then this is a film you’ll be able to get behind. In fact, it rides the fence between hilarious and too stupid so tightly that it is truly a cringe-worthy experience; an experience you’ll laugh through, and that’s all that matters. (81 min.)