In current popular film and literature, the mystery genre seems to be going the way of the Dodo.

Today, audiences are far more likely to watch a gritty thriller or bleak procedural like The Night Of, than a remake of Murder on the Orient Express.

But if you, like me, still want a taste of the so-called “cozy” whodunit, then it’s worth checking out the 1976 satirical parody of the genre Murder by Death.

The movie’s plot is set up around the classic “locked room” murder mystery. In this case, a group of the world’s greatest detectives is invited to the mansion of an eccentric millionaire, who challenges them to solve a murder that will take place at a dinner party that very night. Each detective is an exaggerated parody of classic characters from mystery literature, including a food-obsessed Belgian in the mold of Hercule Poirot, an elderly matron in the fashion of Miss Marple, and a hard-bitten detective that is obviously a send-up of

The film is a who’s who of 1970s Hollywood stars. Some of the standouts include Peter Falk, who’s turn as the brooding Dashiell Hammett-esque wannabe Sam Diamond is a hilarious precursor to his run on the popular television series Columbo, and Sir Alec Guinness (that’s Obi Wan Kenobi for those who didn’t know) playing a blind butler of the mansion. Other actors in the film include David Niven, Peter Sellers, and Maggie Smith. 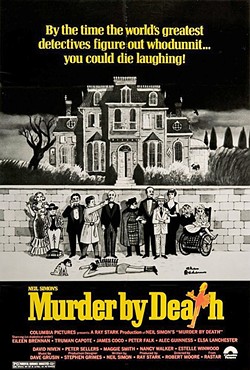 By far the best casting is the eccentric millionare who invites the hapless mystery-solvers to his mansion. The part is played by famed writer Truman Capote. While Capote’s acting isn’t all that good, placing the man who wrote In Cold Blood into a madcap parody of great characters in mystery and crime literature is a clever meta gag that, as a writer, I can’t help but geek out over.

Now, while the plot is interesting and the cast is exceptional, the humor of the movie likely won’t be for everyone. The jokes are broad and very, very un-PC by today’s standards. Murder by Death’s humor either relies on bored physical comedy, like pratfalls, or more often, on jokes based in ethnic stereotypes, sexual orientation, or physical disability. Jokes about Guinness’ butler character are all based on the fact that he is blind, which his final moments on screen dedicated to a zany back and forth with the mansion’s maid, who is def. Falk’s character’s tough-as-nails persona is undermined by multiple jokes alluding to him possibly being gay.

But the most uncomfortable bit in the movie by far is Peter Seller’s character, Sidney Wang. Wang is a parody of Charlie Chan, a Chinese detective in literature and film. Sellers, a famous character actor, is a white British man. He appears in the film sporting buckteeth, wearing a flamboyant silk costume, and speaking in an outrageously exaggerated accent that, in 2016, can’t help but make you squirm a little. Now to be fair to Sellers, Chan was played by a Swedish actor in some very popular 1920s films. But Sellers’ character is so stereotypical and uncomfortably offensive that it’s hard to read the performance as a meta-gag, and if that is the case, he doesn’t pull it off.

In the end, those jokes are also the least funny ones in the film. Obviously 1976 was a different time, though I doubt that is much comfort to the groups at whose expense the movie makes its jokes. If it’s not your bag, then skip it in favor of the later (and much funnier) take on the same plot, 1985’s Clue.

In the end, Murder by Death is an interesting commentary on what was at the time a well-worn genre, but because of its questionable humor, it has to be watched within the context of its time and may not be to everyone’s taste, making it truly, a guilty pleasure. (93 min.)