If there is one thing I enjoy more than watching movies, it's playing video games. But even an avid button-masher like myself has to admit that video games have been consistently responsible for some of the worst movies ever made.

While you'd think that an immersive, action-oriented source material like games would be easily adaptable into engaging films, history is rife with examples that demonstrate the exact opposite. In fact, the rule seems to be that the more popular the video game is, the bigger a flop the movie is. Early attempts at translating games to big screen like 1993's Super Mario Bros. and 1994's Street Fighter are so cringe-inducingly bad as to be nearly unwatchable. Recent attempts, like 2016's World of Warcaft, are a slight improvement, but only in that the film is simply boring rather than concretely awful. 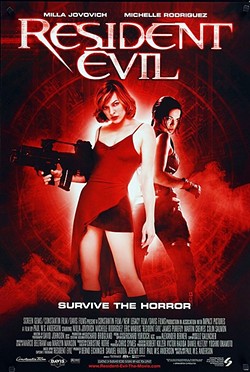 The one exception appears to be the film based off the poplar zombie video game franchise Resident Evil. The popular games have spawned a series of six movies between 2002 and 2017 that have raked in a total of more than $1 billion.

With the newest and, supposedly final, installment of the franchise currently out in theaters, I thought it would be prudent to go back and watch the film that kicked everything off, 2002's Resident Evil introduces actress Mila Jovovich as "Alice," a woman who wakes up in a lavish mansion with no memory of how she got there. She soon discovers that the mansion is just a front for a massive underground lab for the sinister Umbrella Corporation. The company created a deadly virus that turns people into zombies, and as you'd expect, there's been an outbreak. Alice falls in with a group of highly trained special forces operatives sent into the lab to stop the virus from getting out into a nearby town while she tries to recover her lost memories.

As movies go, it is has the standard trappings of an early 2000s era action movie, from the iffy-looking CGI monsters, to the obligatory nu metal soundtrack featuring Slipknot and Marilyn Manson. But the plot and acting are enough to carry you through to what you actually came to see: people fighting a giant horde of zombies.

Resident Evil's most glaring weakness is actually one of its biggest strengths. The movie only loosely resembles the game it's based on, taking familiar elements (a mansion, an underground lab, a virus, zombies) and remixing them into a more action-oriented plot with totally new characters. While hardcore fans of the Resident Evil games like myself may have balked at the choice to stray so far from our beloved source material at the time, it allows the movie to give new viewers the flavor of the games without kneecapping itself with a slavish dedication to a point-by-point adaptation. In fact, the original script, penned by zombie movie legend John Romero, was thrown out precisely because it hewed too closely the original game.

In the end, it was the right call. Six movies later, the film has a substantial fan base, so much so that I doubt the newest installment in the series Resident Evil: The Final Chapter, will actually be "the final chapter." While I don't foresee video games becoming the massively successful sources for movies that comics books have, Resident Evil, and its successors do present a blueprint for how to make game-based movies interesting, engaging, and successful. (96 min.)