Where's it available? Streaming on Amazon

Some movies are so bad that they somehow transcend their un-watchability, inexplicably sucking you into the eye of the delightful hurricane of its own awfulness—a proverbial car wreck that you just can't stop looking at. 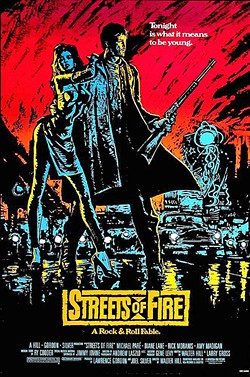 One of the most well-known examples that comes to mind is Tommy Wiseau's operatically awful The Room, which has since become a massive cult classic and even spawned a big budget Hollywood movie starring James Franco. But while The Room is currently hogging all the "so bad it's good" glory lately, I humbly submit a lesser known clunker, the 1984 movie Streets of Fire, which can easily stand toe-to-toe with Wausau's masterpiece as a bad film that you simply can't stop watching.

Streets of Fire the bizarre story of a female rock star named Ellen Aim (Diane Lane), who returns to her hometown (an unnamed city) to give a concert, only to be kidnapped by a gang of bikers led by a hilariously named villain, Raven Shaddock (Willem Dafoe). It's up to Tommy (Michael Pare), who is Ellen's ex-boyfriend and a former solider, to save her from the gang. The crew he assembles to help him out includes a mechanic-cum-getaway driver McCoy (Amy Madigan) and Ellen's wise-talking manager and current boyfriend Billy "Big Mouth" Fish (Rick Moranis).

Described as an "action fairy tale," the movie combines a rock-a-billy, leather-jacketed street-rumbling 1950s aesthetic with schlocky 1980s action movie machismo. The combination is like a peanut butter and pickled herring sandwich, so strange that you just can't help but wonder what it would taste like if you dared to take a bite.

The acting is comically hammy and overwrought despite the presence of stars like Dafoe, Moranis, Bill Paxton, and Ed Begley Jr. The movie's scenes lurch from gunfights, car chases, and explosions to cheesy 1980s rock-music numbers and back again. Like The Room, you can't help but be drawn into its weirdness, all the while knowing that literally anything else you could be doing instead of watching it would be a more productive use of your precious and limited time on this earth.

But don't feel too bad if you, like me, were sucked into to the glorious train wreck that is Streets of Fire. Like scarfing down a deep-fried Twinkie at the county fair, the guilt of doing something you know is a little bad for you only makes the experience more fun. (93 min.) Δ