The 1990s were an interesting time for horror films, to say the least. The 1970s and the 1980s were jam packed with some of the most well-known and well-loved horror franchises that spawned a host of sequels and imitators.

But by the early 1990s, staple slasher franchises like A Nightmare on Elm Street, Friday the Thirteenth, and Halloween were beginning to grow stale, and filmmakers were left to try and come up with new ideas to keep the genre fresh, interesting, and profitable.

In some cases, they succeeded. Nightmare on Elm Street creator, the late Wes Craven, ingeniously used the meta-narrative of horror film itself to create Scream, and newcomer films like The Blair Witch Project and The Ring breathed new life into the horror genre for a new generation. 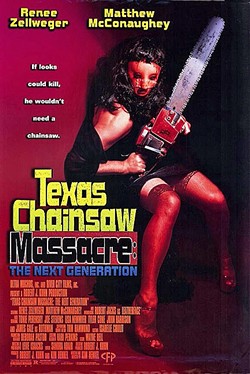 But not every popular horror franchise was successful in making the transition, and Texas Chainsaw Massacre: The Next Generation is, sadly, a prime example.

Released in 1997, the film is a botched attempt to reintroduce Toby Hooper’s 1974 horror classic to a new generation. The movie follows a group of teenagers whose prom night joyride through the Central Texas countryside lands them in the hands of a murderous family of psychotic killers, including the franchise’s mascot, Leatherface.

Despite being written and directed by Kim Henkle, who co-wrote the script for the original film, Texas Chainsaw Massacre: The Next Generation is terrible in all the wrong ways. Most of the acting is stunted, the dialogue is bad, and the plot is nearly nonsensical due to the numerous edits and recuts. The tone of the film tries to straddle the line between campy humor and the intense horror of the original movie, but never can quite decide between the two.

So why is it worth watching? Well, the film’s lead roles included two young actors that have since become household names. The role of the film’s “lone survivor” and scream queen is played by Renée Zellweger. The role of Vilmer Slaughter, a murderous tow truck driver and the film’s main antagonist, is played by none other than Matthew McConaughey.

As bad as the movie is, it’s pretty clear from their performances that both McConaughey, whose name is misspelled in the credits, and Zellweger were destined for better things. Interestingly enough, the film was shelved for three years before it was given a theatrical release, and was actually delayed until after the release of Zellweger’s breakout performance in 1996’s Jerry Maguire. The additional fact that McConaughey’s talent agency reportedly tried to stop the film from being released at all should give you a clue about how these current acting superstars feel about their involvement in the movie.

Texas Chainsaw Massacre: The Next Generation is an interesting bit of horror film trivia, and not much more. While the original stands out as one of the most intense and terrifying horror movies of all time, none of its sequels ever quite lived up to their forebear, though a 2003 remake and two subsequent sequels are watchable and at least make up for some of the damage done to the franchise by flops like The Next Generation. (94 min.)