Yes, I do feel some guilt over how much I enjoy The Hangover, the 2009 comedy hit starring Bradley Cooper, Zach Galifianakis (his breakout role), and Ed Helms, whose box office success spawned two awful sequels. Why? Because at the end of the day, this is another bro-y, frat-astic romp about a wild bachelor party in Vegas gone wrong. But the truth and irony is, this is exactly what also makes The Hangover an enjoyable success story: screenwriters Jon Lucas and Scott Moore found a way to inject new life and originality into a tired premise. 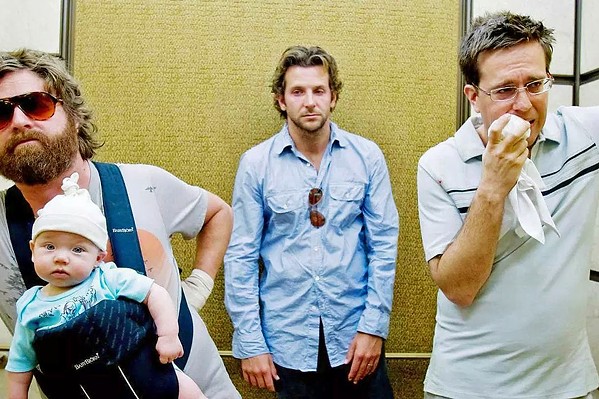 Two days before Doug Billings' (Justin Martha) wedding, he and friends Phil (Cooper) and Stu (Helms), and eccentric brother-in-law Alan (Galifianakis), take the classic road trip to Las Vegas for his bachelor party. We know this crew. Doug's the clean-cut, handsome one. Phil's the charismatic and unhappily married bad boy. Stu is the nervous, pushover dentist. And Alan is that awkward brother you married into who you tolerate but are embarrassed by.

The last we see of the group on their arrival night is them on the roof of Caesar's Palace, making toasts and taking shots of Jagermeister. Flash forward to the next morning, and they're waking up in a $4,200/night villa with a live tiger, a chicken, a baby, and a missing tooth of Stu's. Oh, and Doug—the bachelor—is missing. Nobody can remember anything. The rest of the film is us watching Phil, Stu, and Alan navigate Vegas to try to piece together what the hell happened and find Doug in time for his wedding. The ensuing madness includes a trip to the hospital in a police car, a run-in with the mob, and a Mike Tyson cameo. Needless to say, our wolfpack, as Alan calls the group, got into way more trouble than we could've ever imagined that night.

Everything enjoyable in The Hangover comes from the cast—which, to me, holds up as one of the best blends of actors in a comedy in recent memory. Galifianakis is shockingly hilarious as Alan, who's a shameless, inappropriate, and socially unaware—but lovable—loner. His personality, which resembles the character Galifianakis played in his Funny or Die show, Between Two Ferns, is on full display here. It's no surprise, in retrospect, that this is what catapulted his career in Hollywood. He's truly awesome and has seamless chemistry with Cooper and Helms, who deliver memorable performances in their own right as friends on two sides of the same coin.

The Hangover was a huge commercial success; it grossed $468 million at the box office, on only a $35 million budget. Of course, financial success comes with an unfortunate dark side: sequels. The Hangover Part II (2011) and III (2013) were terrible movies—so terrible that they somewhat marred the original. Pleasantly, for me, a rewatch had me forgetting those later blunders.

If you haven't seen any of the series, check out the first and don't go on. If Vegas bachelor party mayhem isn't your thing (and I totally get it), you should skip The Hangover. It won't change your mind on the genre. But if you enjoy Galifianakis and some crude comedy, be prepared for some the best that niche can offer. (108 mins.) Δ