There’s no easy way to say this, but Jackie Chan is kind of a joke.

It’s hard not to mention the Hong Kong native now without associating him with some of his later, lesser work: Embarrassing flops like The Tuxedo and The Accidental Spy. But before those, and even before his more popular flicks like the Rush Hour franchise, Chan starred in some of the most thoroughly ass-kicking martial arts movies ever made. Those movies, most of which were made in China and later cut and dubbed for American audiences, are available but oft forgotten.

Of those older movies, The Legend of Drunken Master is hands-down one of Chan’s best. Originally filmed and released in China in 1994 as Drunken Master II, the film was re-edited and dubbed for American audiences in 2000 like many of his other early films (Supercop and Rumble in the Bronx just to name a few). 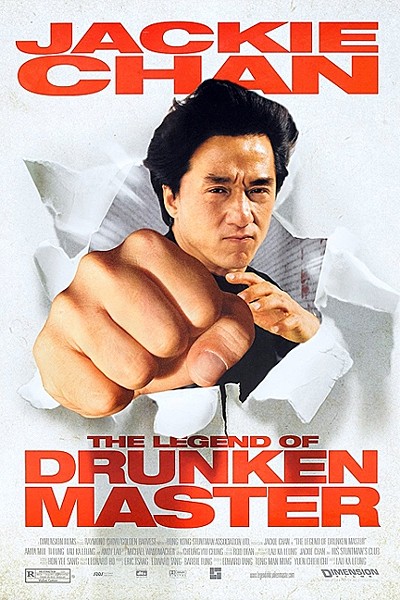 The movie tells the story of Wong Fei-hung (Chan), a young, cavalier martial artist and master of the “drunken boxing” style of Kung Fu. Fei-hung ends up getting mixed up in the plot of a sinister British ambassador and his thugs plot to steal and sell Chinese artifacts. While he’s an adept fighter when sober, Chan’s character is downright unbeatable when he’s drunk. However, Chan’s character has also promised his pacifist father he won’t fight or drink anymore, making stopping the bad guys a bit more complicated. You’d think mixing a family-centered comedy of manners in with a Kung-Fu film might clash, but Chan and the rest of the cast make it work, adding a humorous twist to a action-centric genre film.

The heart of The Legend of Drunken Master is, of course, its elaborate fight scenes and stunt sequences. All of them were choreographed and performed by Chan. In addition to some solid, fast-paced martial arts, Chan, as he is wont to do, also includes some insanely dangerous stunts such as one where he falls and crawls across hot coals. Chan adds a hilarious comic layer to most of those fights by playing his character as a stumbling drunk, making the beating he’s doling out to his enemies look almost accidental. The movie delivers with what we all really want out of a film like this: The fights and stunts are fast and furious and occur often. Add to the superb fight sequences Chan’s knack for goofiness and physical humor, and you’ve really got a film that embodies what made him great.

Chan isn’t the only actor to keep an eye on in this movie. The late Anita Mui, who was a well-known Chinese actress and singer before her death in 2003, nearly steals the whole show as Chan’s character’s stepmother, Ling. Mui’s character’s comic scheming is hilarious, and one can’t help comparing her performance to Lucille Ball’s titular character in television’s I Love Lucy. In addition, Mui has some impressive martial arts chops of her own. Watching her performance, it’s a shame that she didn’t become more popular in the West before her death in 2003.

Taken as a whole, The Legend of Drunken Master is a great reminder of why the world became so enamored with Chan. Not only could he lay down a Bruce Lee-caliber ass kicking on film, but also the heart and humor he brings to his roles make him easy to root for, and draws in an audience outside of hardcore action and martial arts fans. (102 min.) ∆