I first heard of 2008’s Tokyo Gore Police from a friend as we discussed movies during a long car ride. He mentioned it offhand and quickly, and I had to ask him to say the title slower.

With a title like that, I knew there was a pretty high chance that it was right up my alley. I was right.

In fact, the best and most accurate way to describe the movie, released first in Japan and then in the states, is its title. The name is no frills and lets you know exactly what you are in for. The title doesn’t lie. The movie is gory, disgusting, violent, bizarre, and crude. It’s all spelled out for you right up front. 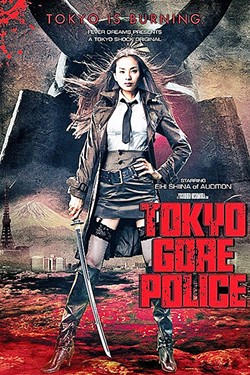 Imagine mashing together Quentin Tarantino’s Kill Bill, Paul Verhoeven’s Robocop, David Cronenberg’s The Fly, and Tobe Hooper’s Texas Chainsaw Massacre, and you’ll have a rough idea of just what to expect from this strange, bloody romp of a movie. The film takes place in the future in (where else?) Tokyo, where a mad scientist has created a virus that turns ordinary humans into grotesque and violent monsters. These twisted creations, called “engineers,” are too much for the regular police to handle, so the job falls to an elite and brutal special unit of human monster hunters that includes a young sword-wielding female antihero named Ruka (Eihi Shiina). Ruka is your typical action movie badass, a loner who chafes at authority and harbors a dark secret. As she hunts down and brutally dispatches the mad scientist and his monsters, she’s also trying to find the man responsible for gunning down her father in front of her when she was a child.

But in all honestly, the plot is the least important or interesting thing about the movie. Tokyo Gore Police is pure grindhouse gold. The body horror, gore, and perverted adolescent humor are dialed up to a surreal and cartoonish degree: blood sprays from severed limbs in absurd fountains, an infected police officer-turned-engineer sprouts an oversized fleshy machine gun from between his legs, the movie even breaks for a cheery commercial advertising a line of razors made for teens to cut themselves with. This movie knows what you came too see and piles it on until you are unsure if you knew what you were really getting into.

In the end, Tokyo Gore Police is all style and no substance, which is actually one of its strengths. It doesn’t pretend to wrap up the shock or schlock in pretentious artistic conceits. Toyko Gore Police puts on no airs and makes no apologies. It’s swords and guts and monsters, and sometimes that’s all you really need out of a movie. (110 min.)