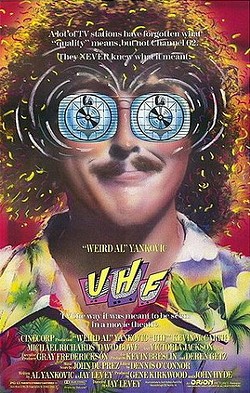 Where? DVD and Streaming and on Amazon.com

When it comes to comedy in television and film, I’ve always felt that the weirder the humor is, the better.

I’m not ashamed to admit that this deeply held opinion comes from discovering and falling in love with the oddball humor of films like Monty Python and the Holy Grail and Mel Brooks’ Young Frankenstein.

And 1989’s low-budget cult-classic UHF easily stands toe to toe with Python and Brooks’ films in the pantheon of weird comedies. Written and starring Cal Poly alum “Weird Al” Yankovic, this gem tells the story of an unemployed but loveable loser George Newman (Yankovic), who stumbles into ownership of a failing UHF television station (for those of you born in the age of digital television, think of a UHF station as similar to local cable access stations).

The plot follows a pretty predictable format. Newman takes the station from the verge of bankruptcy to smashing success, earning the ire of a cruel and wealthy manager from a rival station, who kicks off a nefarious plot to shut the UHF station down. But the rote plot is basically just a vehicle for Yankovic and his co-writer and manager Jay Levey to cram as many oddball jokes, bizarre physical gags, and hilarious parodies as they possibly can in a single film. Those jokes include several sequences where the Walter Mitty-esque Newman imagines himself in popular movies like Rambo and Indiana Jones, as well as satirical movie trailers for films like Gandhi II and Conan the Librarian.

While humorous parody is expected from an artist like Yankovic, who made his name and won multiple Grammys by writing and performing goofy versions of popular songs over the last 38 years (my personal favorites are “Amish Paradise” and “Eat It”), some of the funniest jokes and bits from UHF are totally original. Cutaway gags featuring some of the channel’s shows, like a game show called Wheel of Fish, and commercials for outlandish businesses, like a Costco-style superstore called Spatula City, offer some of the best laugh-out-loud moments of the film. Their style is startlingly reminiscent of much of the madcap cutaway jokes found in modern comedic hit television shows like Family Guy.

But what really keeps me coming back to this movie isn’t just the surreal so-dumb-its-clever comedy, but the fact that the film has a lot of heart. Unlike Family Guy, the jokes never feel too mean-spirited or cynical. Yankovic’s character, while weird, is a good guy at heart, and his character’s optimism, belief in himself, and imagination is what ultimately wins the day at the end of the movie, allowing Newman and the cast of off-kilter misfits on his channel to beat the evil network goliath.

UHF checks all the boxes of a classic comedy. It’s fun, funny, and a reminder that being a little weird isn’t always a bad thing. (97 min.)