When it comes to classic monsters, there’s no shortage of creatures that have enjoyed continuing popularity.

Vampires and zombies in particular have had a great cinematic resurgence, thanks to television shows like AMC's The Walking Dead and HBO’s True Blood. But aside from a semi-important role in the aforementioned sexed-up vampire show, it seems that our old friend the werewolf just hasn’t had the same spectacular pop culture moment as his monster kin. Sure there’s been attempts here and there, particularly with the lackluster revival of Teen Wolf as an MTV television series, but mostly lovers of all things lycanthropic don’t have much to be excited about.

Thankfully, in 2014, writer and director Lowell Dean gifted werewolf aficionados with WolfCop, a horror comedy that lives up to its title and then some. 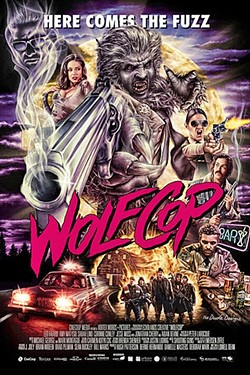 The film centers on Lou Garou (Leo Fafard) an alcoholic sheriff’s deputy who spends his days guzzling booze and avoiding doing anything to curb the rampant crime and corruption in the small town he swore to protect. That’s until a call leads him into the woods where he is mysteriously turned into a werewolf. Now, imbued with all the powers that no respectable werewolf should be without—super strength, and enhanced sense of smell, etc.—Garou spends his nights as a hairy beast fighting the city’s scumbags and unraveling a vast criminal conspiracy in between chugging bottles of whiskey and devouring doughnuts.

WolfCop is gleeful, both in its juvenile humor and over-the-top gore. The tone of the movie is best set up in Garou’s first transformation into the werewolf, which occurs while he in in a drunken stupor and trying in vain to use the urinal in the bathroom of a local bar. Let’s just say that the transformation begins, uh, below the belt, before ending in human skin and blood coating nearly every surface of the set.

In 2016, I’m not entirely sure that a serious and truly scary werewolf movie can be done. Lon Chaney’s Wolf Man may have terrified audiences in 1941, but after years of slashers like Jason, Michael Myers, and all-to-human “monsters” like Hannibal Lector, it not as easy for a man with some sharp teeth and too much body hair to get modern audiences to shake in their boots.

But WolfCop demonstrates that humor can sometimes be the savior of things we no longer find all that frightening. The film is a must-watch for anyone looking to keep the werewolf around as a movie monster staple. And the good news for fans: a sequel, cheekily titled Another WolfCop, debuted in September, and is currently making the rounds at film festivals. (79 min.)