A world-renowned craftsman restores some of the most valuable cars ever produced. 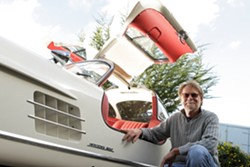 Tucked in the hills south of San Luis Obispo sits a brown, barn-like building filled with some of the most beautiful and expensive cars ever built. Some of them are stately, of pre-WWII vintage; the others are a precious model from the 1950s widely considered the zenith of 20th-century automotive design. Pull the small recessed door handle on one of those cars and the door swings out and straight up, revealing a simple, elegant interior. The doorsills are wide and high; the steering wheel pivots down so larger drivers can fit. These are Gullwings, so named because when their doors are open, the cars resemble a bird about to take flight.

Known formally as the Mercedes-Benz 300 sl, they were manufactured only between 1955 and 1957, and are here to be restored by the owner of the workshop, Scott Grundfor—one of the leading experts on Gullwings, who has more than 30 years of experience rebuilding them. Dressed in a tired grey sweater and jeans, sitting at a desk in the corner of his shop, Grundfor looks like a retired sea captain on vacation.

“They were the finest engineered cars ever made,” said Grundfor, who’s the grandson of one of the designers of the X-15, a ground-breaking, experimental, supersonic airplane. He began a restoration business in the ’80s in Los Angeles, where he catered to many of Hollywood’s most famous stars but grew disgruntled and moved to Michigan. In 2001 he relocated to the Central Coast.

Grundfor thinks of old Mercedes as works of art that should be preserved and conserved for future generations. “Today cars are thought of like toast,” said Grundfor, leaning against one of his masterpieces. “People use them and throw them away. Gullwings are something completely different. They represented a peak of engineering and craftsmanship. A pinnacle of engineering history.”

He believes as society moves away from the internal combustion engine, old cars will be collected and displayed as historical objects, a representation of 20th-century design at its best. Some of the cars in the shop are immaculate, perfect; restored to a condition better than new.

“These may have been amazing cars when they were new, but they were still production cars made by workers who had a limited time,” Grundfor remarked, as he showed where workers would dab grease haphazardly on different parts of the engine compartment of a now-perfect white Gullwing. On an original car, paint runs could sometimes be seen on the firewall or the frame. The emphasis on restoration used to be to make a car ideal.

Grundfor prefers to preserve cars now. If they are in decent shape, he said it’s better to clean them up but leave them in the original condition. “There’s just something special about a car that’s been taken care of,” Grundfor said. “It’s different than a new car but in some ways it’s better.”

Grundfor also collects concept cars, mostly Fords from the ’80s, when automobiles evolved from upright squares to more aerodynamic shapes. His favorite, though, is a 1955 Ghia Streamline X, a silver-and- orange, Italian winged masterpiece. Designed by Giovanni Savonuzzi and dedicated in honor of Rita Hayworth—a poem apparently written about her was found during restoration etched into the floor pan—its swoopy magnificence outshines the Teutonic classics next to it. Originally designed for jet power, the Ghia has a small turbine installed by Grundfor strictly for slow-speed use.

Amid the automotive glory, a few small, box-like vehicles interrupt the flow. It turns out Grundfor, a world-class master of vintage German supercars, is a bit of a Green: For everyday driving, he likes electric cars.

“They are a kick,” Grundfor said as he passed by a Miles, a rare Japanese-Korean-Chinese econo-box concoction. “You never realize how much energy is wasted when you drive a big, gasoline-powered car until you drive an electric car,” he said.

He owns a Hybrid Toyota Prius and Honda Insight as well as three electric cars. Next to an immaculate 1955 Gullwing, sits his Miles electric car. Grundfor observed that the Mercedes is the one of the best vehicles the 20th century offered, and in his mind, the electric car is where transportation is headed in this century.Grundfor seems nonplussed by all the automotive magic that surrounds him. When asked how much Gullwings sell for, Grundfor answered,“These probably would sell for around $650,000. That’s a lot of money. Personally, I’d rather have a house.”