Take a stroll through the artistic happenings of 2012

If only life imitated Candyland!

While I’m now tempted to tell all my stories through interpretations of childhood board games, here are some words about the year’s artistic happenings as well. (While you’re at it, see if you can identify a few of them as icons in the adjoining illustration by Irene Flores.) Ready, boys and girls? 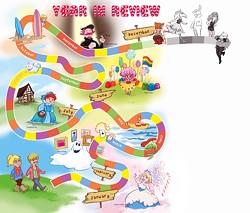 The year got off to a brassy and delightful start with Joan Rivers’ visit to the Cal Poly Performing Arts Center. The comedian, actress, and ruthless fashion critic is known for bringing formerly untouchable topics to the stage, and showed no signs of softening with age.

“Is there anything you wouldn’t joke about?” I asked Rivers in an interview.

“I am the most politically incorrect person in the world,” she said. “What’s happened to our country is shocking. You’re not allowed to say anything about anybody, you’re not allowed to expect anyone to do anything on their own. So no. No, no, no, no. I hit on everything.”

Also, the normally youth-oriented theater company Kelrik Productions brought puppet sex into a church. Seriously: The company, which performs at Unity Church in San Luis Obispo, launched its “After Dark” series, a program of adult-oriented entertainment, with a popular production of Avenue Q, which is like Sesame Street gone hilariously bad.

And suddenly, it was dance season. In March, San Luis Obispo’s Civic Ballet revived the beloved rock’n’roll ballet Alice in Wonderland. In April, Ballet Theatre SLO premiered the dreamy, under-the-sea adaptation of Undine, Friedrich de la Motte Fouqué’s story of a water sprite who marries a mortal. And in May, the North County’s Class Act Dance premiered Let it Be, a Beatles ballet performed to a live band.

Meanwhile, Bay Area sculptor and performance artist Sha Sha Higby displayed her eerie and dazzlingly complicated sculptural costumes, inspired by Japanese Noh theater. If you had the misfortune of missing “Noh Works” at the San Luis Obispo Museum of Art, I feel bad for you.

Lastly, the curious and wonderful Compact Gallery closed its doors, leaving a gaping hole in my soul. But I wasn’t the only one: “I never walked away unchanged,” said one Compact regular of the gallery’s unusual and often site-specific exhibits.

Comedian and actor Leslie Jordan, special guest of Central Coast Gay Pride, spoke with New Times about his TV career (most notably his performance of Karen’s nemesis on Will & Grace), meeting Robert Downey, Jr. in the drunk tank, and coming out as a gay 17-year-old in Chattanooga.

“I still get misty-eyed when I see boys—or girls—walking down the street hand in hand,” Jordan said. “I want so badly to pull them aside and say, ‘Do you have any idea what we went through, just to walk down the street and hold hands?’ You couldn’t do that in Tennessee.”

Summer was a time for geeks of all stripes to get together, as events like the Renaissance Faire and Anime Five Cities (AFC) celebrated the joys of being really, really into something—whether it was jousting or cosplaying. (If you can catch the AFC reference in the accompanying illustration, you are most certainly one of them. Nerd alert!)

At the San Luis Obispo Museum of Art, local artist Daniel Dove exhibited “Remains of the Future,” large-scale visions of destruction, decay, and detritus contextualized within the optimistic design of the ’60s. Did I mention detritus?
Or the ’60s?

Painter and political satirist Mark Bryan returned to Steynberg Gallery for a two-month solo show. (Fact: At Bryan’s opening there was a man walking around dressed as a confession booth, and at one point I swear I looked across the room and saw my grandmother getting into a heated theological argument with him.)

I’ll bet you didn’t know Gidget was Jewish. That is, unless you attended a special screening of Brian Gillogly’s documentary Accidental Icon: The Real Gidget. Kathy Kohner Zuckerman, the inspiration for the Gidget movies, paid a visit to San Luis Obispo in October to share her story.

The SLO Poetry Festival honored Jerry Douglas Smith, its 2012-13 Poet Laureate. The festival also welcomed poets from near and far to participate in two weeks of words and wit. Among them were poet, translator, and peace activist Sam Hamill; Los Angeles poet Gabriel Spera; and talented locals Mike Hannon and Leslie St. John.

Arts Editor Anna Weltner is on a sugar high. Send comments to aweltner@newtimesslo.com.