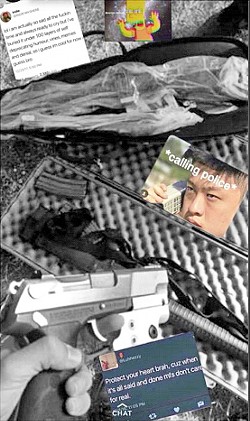 "It's been very, very busy," Lewis said. "The community's a little bit in angst right now."

On March 20, four Paso schools "sheltered in placed" for nearly four hours, after a Paso Robles High School student alerted authorities to a Snapchat post claiming guns had been hidden on or near campus. After an extensive search that involved a K-9 unit, police did not find weapons.

Two days later, in an unrelated incident on March 22, Paso police arrested a 15-year-old and a 16-year-old for a photo posted on Snapchat showing the 16-year-old, a former student, holding a handgun and displaying rifles. Both teens were booked into the Juvenile Services Center on a charge of illegally possessing a pistol.

Those incidents marked just two of the "more than 21 investigations" pursued by the Paso Robles Joint Unified School District (PRJUSD) and police in response to inappropriate or threatening social media posts since March 11, according to Superintendent Chris Williams.

"I can't recommend enough: If you have kids who use social media, continue to monitor that and report it," Williams instructed the community during public comment at the Paso Robles City Council meeting on March 20.

The Paso school community has been on red alert recently, Cmdr. Lewis said, in the wake of the recent school shooting in Parkland, Florida, where a 19-year-old killed 17 students and staff at Marjory Stoneman Douglas High School.

"It's something that's on people's mind," Lewis said. "A lot of times when people see these irresponsible messages on Snapchat or Facebook, they don't know if it's a threat or not. They see someone holding a gun, and they want us to know about it. We take them seriously. ... As far as I know there has been no true threat we've been able to prove at Paso Robles High School."

While many Paso high students participated in the 17-minute walkout, the school's Conservative Club organized an alternative demonstration: a pro-gun rights walk. A photo of that walk shows students displaying signs supporting President Donald Trump and the Second Amendment, with one sign reading, "Black Rifles Matter."

Conservative Club President Justin Smith said they were approached afterward, threatened by their peers, and called "racists." Later that day at lunchtime, the conflict boiled over and a physical fight broke out between female students, which was caught on camera.

In an email to New Times, school district Deputy Superintendent Jennifer Gaviola described the altercation as "unfortunately related to racial tension between the students and inappropriate comments related to race."

Kylie Rivers, a student in the fight who spoke at the City Council meeting on March 20, disputed claims about racial comments and stated she was attacked for participating in the conservative walk. She said she went to the hospital with a concussion after being hit in the head with a cellphone.

"We did a peaceful walk and never once did I say any racial slurs, anything bad," Rivers said. "Two girls came up to where I hang out and they started saying all these names and were totally trying to instigate something."

The school district suspended the students involved in the fight, according to the testimony at the City Council meeting.

While political and racial tensions have escalated on campus, they're also evident in the social media posts recently shared with the Paso police department. Some of the online messages contained racial slurs, according to Police Chief Robert Burton.

"They were very general in nature, although very disturbing," Burton said.

Mason Seden-Hanson, a senior at Paso high and president of the school Progressive Club, said the recent turmoil is indicative of a widening rift on campus.

In response to recent incidents, the school district asked for two police officers to be stationed at the high school campus through March 23. Discussions are underway about partnering for a school resource officer next school year.

Deputy Superintendent Gaviola said the district is also "developing next steps for specific actions related to equity, belonging, and race relations on campus."

The school community will get a chance to cool off between March 26 and April 9 for its spring break.

"It's hopefully going to give the school and community some time to heal and return to normalcy," Cdr. Lewis said. Δ