Hundreds of thousands of Americans spent the last two weeks protesting police brutality and racism in response to the death of Minneapolis resident George Floyd. SLO County protesters have been met with everything from tear gas and boarded-up businesses to solidarity and support.

In Arroyo Grande, protesters faced something else: gunmen. 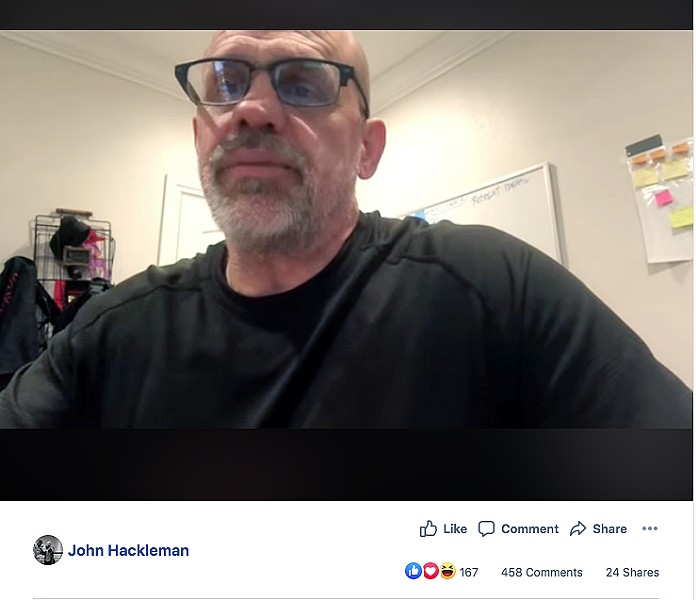 As a few hundred protesters marched through Grover Beach and Arroyo Grande to support the Black Lives Matter movement on June 5, at least three men armed with guns stood on the rooftops of two nearby businesses, The Pit Martial Arts and Fitness and Grand Barbers.

Although the protest carried on and ended peacefully without incident, the situation ignited an impassioned debate about First and Second Amendment rights among SLO County residents. Dozens of community members called in to an Arroyo Grande City Council meeting on June 9 to share their thoughts on the issue; many condemned the gunmen and questioned the legality of their actions.

"People are allowed to possess weapons inside their homes and businesses," caller Chris Cummings said at the June 9 meeting. "However, there are many things people can do inside that are illegal in less private areas. For example, San Luis Obispo County law enforcement often arrest people on private property but in an area open to public view for being intoxicated. That's called drunk in public. This serves a public purpose of not subjecting the public to an individual's obnoxious behavior."

"Those men that were on the roof served to provoke a violent response," Cummings continued. "Or if not violent, at least a feeling of abuse or intimidation in an otherwise civil society. How are people to know who those men were and when they might start shooting?"

But owners of the businesses say they were within their rights to protect their property from the looting, vandalism, and violence that have come with some of the recent protests throughout the nation. In a video posted to The Pit's Facebook page on June 8, owner John Hackleman said that a number of recent protests that started peacefully spiraled into or made way for violence and destruction, even in areas as close to Arroyo Grande as Santa Maria.

There have been dozens of peaceful protests in cities throughout the Central Coast since late May, but after a Santa Maria protest on June 1, a group of individuals broke windows at and stole from the Town Center Mall. That same night, after a peaceful protest in SLO, a group of teens who were not affiliated with the protest vandalized a few downtown stores.

Many business owners feel they can't afford another financial hit after COVID-19, and Hackleman said in the video that the guns were only meant to deter any possibly violent behavior. The weapons weren't loaded, he said, and he apologized for scaring people.

"This is all I have," he said in the video. "The gym is all I have. It feeds myself, it feeds my family, provides a roof over my head. It contributes a lot to the community and it has for quite a while."

But Hackleman's June 8 video, which he titled "My Apology," took on a different tone than others he posted to social media immediately before and after the protest on June 5.

In a 24-minute video he posted before the protest, which was deleted and then reposted to YouTube by someone else the next day, Hackleman repeatedly said that all protesters across the U.S. should be held responsible for the violent and disruptive actions of "rioters."

"That's the logic right?" Hackleman said in the video. "Like if a bad cop kills a person, then all cops are responsible?"

Though a number of protests throughout the U.S. have ended in violence and destruction, protesters nationwide say its law enforcement who often instigate and escalate the violence.

"So it would behoove you guys, if you're doing a little march, kumbaya, whatever, that's fine," Hackleman said later. "But you gotta remember one thing: Walk quickly when you go past The Pit. Just walk quickly.

"Don't even think about it," he continued. "Run past The Pit. Don't even fucking look at it. Just look straight ahead and do your little march."

After the protest on June 5, Hackleman posted another 20-minute video from a car, this time addressing the criticisms brought up by several concerned community members, including some who called for SLO County residents to boycott The Pit. Hackleman defended his actions, again noting that some protests on the Central Coast have led to violence.

"Now we're hearing fucking lunatics say that we should be boycotted because we were protecting our business," Hackleman said. "Are you kidding me? Are you kidding me? What kind of lowlife piece of shit would say something like that?"

Although some community members who called in to the June 9 Arroyo Grande City Council meeting said they understood and supported Hackleman's point of view, most said brandishing firearms was overkill and intimidating to protesters and their children. Several residents called for an independent investigation into the matter and questioned Hackleman's personal ties to law enforcement. In one of Hackleman's videos, he mentioned that Sheriff Ian Parkinson had visited his gym the day of the protest.

An Arroyo Grande Police Department investigation into the incident is ongoing, according to Arroyo Grande Police Chief Beau Pryor. Though Pryor said he couldn't share many details about the situation, he said none of his officers are affiliated with Hackleman or The Pit.

"We know him as a local business owner and that's it," he told New Times.

Still, city staff say Hackleman's actions appear to be legal. In a video Mayor Caren Ray Russom posted to Facebook on June 6, she said Arroyo Grande's city attorney and police found that because the gunmen were on private property that they owned, and did not point their guns at protesters, their actions were legal.

In her video, Russom said the SLO County district attorney agreed that the gunmen were within their rights. But Assistant District Attorney Eric Dobroth told New Times that although the district attorney has been in communication with the Arroyo Grande Police regarding this matter, neither Dow nor any District Attorney's Office staff has provided a legal opinion regarding the public display of firearms.

"At no time did Mr. Dow state that a crime had not occurred," Dobroth wrote in an email to New Times. "Based on the information known at the time that Mr. Dow spoke with Chief Pryor, there was insufficient evidence to determine whether a crime had occurred. Chief Pryor indicated that his office would continue their investigation to address the concerns of the legality of the firearms and alleged threatening statements."