Guy Budd does not churn out CDs. Albums still in print include 2001’s Woke Up Dreaming, 2006’s Gypsy Souls, and 2009’s Live. Now add one more, Another World, which Budd quietly released to the world in late 2014, and which he’s just now starting to promote with a free show this Friday, Feb. 6, at Morro Bay’s Libertine Pub at 8 p.m.

The CD starts with “Light,” a song that hits the ground running with some chunky licks that flow into a screaming solo and then is punctuated by Budd’s smoky bluesy vocals. Imagine Stevie Ray Vaughan and Jimi Hendrix had a baby they thought was Buddy Guy but was actually Guy Budd. 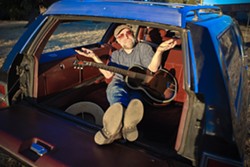 “Ovaltine” chugs along with propulsive guitar work and the classic blues-rock sound, but the album takes a left turn on “Favored Clay,” a somber and contemplative ballad that slowly builds into a song that showcases Budd’s incredible finger picking style and general shredding ability. It sure doesn’t hurt that Budd’s got vocalist Inga Swearingen singing backup on this and two other tracks. I should also note: These songs have plenty of space to move all over the place and layer all kinds of textures. Most of the 10 tracks are more than six minutes long.

Some deep blues await in “Mercy Seat Blues,” a song that could have come from the mind of Lightnin’ Hopkins or Muddy Waters. “Coming off the Warpath” starts with a mysterious, far-off sounding, high-pitched guitar wail before getting freaky and weird as Budd demonstrates how deftly he can control his various guitar sounds. He makes it all seem so effortless.

On “Heart with a Spanish Lamp,” Budd’s guitar does the singing, with expressive finger work and a melancholy and sparse melody that’s breathtakingly and hauntingly beautiful. This is a track you want to put your headphones on for, close your eyes, and get gone.

Budd lightens things up on “Skydiver,” a sweet groover with innuendo-filled lyrics: “That’s right, baby, I’m a skydiver, looking for a place to land. Skydiver, honey, looking for a place to land. Light up your runway, child, take me home to the promised land. A real high flyer, baby, floating from peak to peak, a real high flyer, baby, riding up here on the stream. I see you riding up to meet me, turning figure eights in your sleep.”

“See What Happens” is a live-take improvisational experimental tone poem that demonstrates that first and foremost, Budd is an artist. It also features Swearingen’s soulful scat singing. After than, the album’s longest track, “Butterfly” (10:57), works its slow burn magic, with first Budd’s vocals and then Swearingen’s, sounding lovely and lilting. Simply gorgeous.

The album closes with “Shapeshifter,” a warm, maybe even lush-sounding instrumental that feels like a bicycle ride through a tree-lined path on a sunny day, with the light and shadow painting an abstract portrait across the ground.

This is music to lose yourself in, and Budd has populated the album with first-rate players like Ken Burton (keyboards), Andy Kulikowski (bass), Wil Anderson (bass), and Howard Emmons (drums).

Lots of people play the guitar. Guy Budd goes way beyond. Way. Beyond.

SLO Brew’s swinging for the fences this week with a series of shows for every musical taste. Let’s start with Pinback this Friday, Feb. 6 (7:30 p.m.; all ages; $16 presale or $18 at the door). Rob and Zach will bring their swirling, melodic sound to the stage after an opening set by David Huntsberger, whose bio simply reads, “Comedian/Cattle Baron/Professor Blastoff.” 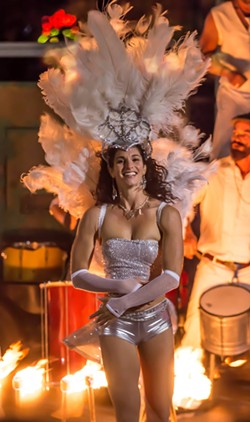 The party of the week has to be the Zongo All Stars show this Saturday, Feb. 7 (7:30 p.m.; 21-and-older; $10 presale or $12 at the door), which they’re billing as “Cali Carnaval” because, you know, Mardi Gras and all that jazz. In addition to the New Times Readers Poll-voted Best Band, you’ll also get Samba Loca and Sidney Nicol! We’re talking an evening of Brazilian Samba drum and dance, along with professional Samba dancer Sidney Nicol of Feathers and Fire in Santa Cruz. Zongo will play two sets, with a set in between for an outrageously fun Samba drum and dance set. For those who don’t know, Samba Loca is a hot new local 10-piece Samba drum ensemble led by Graham Yates of Captain Nasty. Par-tay!

You can revisit the sights and sounds of Beatlemania on Sunday, Feb. 8, when Abbey Road—A Tribute to the Beatles returns to SLO Brew (6:30 p.m.; 21-and-older; $15 presale or $17 at the door) as part of their current 110-city tour of the U.S., Canada, Australia, and Puerto Rico. The band members bring the Fab Four to life “with their tight harmonies, flawless note for note renditions of Beatles hits, custom-tailored costumes, vintage instruments, Liverpudlian dialect, and precise attention to every detail,” according to their press materials. Expect three costume changes! The show is almost like a play that acts out seminal moments in this seminal band’s career.

The Stone Foxes hit the SLO Brew stage on Wednesday, Feb. 11 (8 p.m.; all ages; $9 presale or $11 at the door). The San Francisco-based quartet recently released “Jericho” as part of their ongoing music release series “Foxes First Fridays.” This month’s bluesy rock tune “is about someone trying to break through to someone and trying to break down the walls that people create to protect themselves,” said frontman Shannon Koehler. San Francisco Weekly says the band is “absolutely committed to rocking your face off.”

Unfinished Business presents a Beatles tribute this Friday, Feb. 6, at the SLO Grange Hall (7 p.m.; $15 at Boo Boo’s). “This is a special show celebrating the 51st anniversary of The Beatles’ first appearance in America on the Ed Sullivan Show in 1964,” said band member Ed Miller. “We continue to celebrate that performance because it changed music history, and the music of the Beatles has inspired the music of every generation since.”

The Painted Sky Concert series presents Iain Matthews on Friday, Feb. 6, at 8 p.m. ($20; 927-8330). “Recently, my good friend Jude Johnstone mentioned that her friend, Iain Matthews, was going to be coming through California, and she wondered if Painted Sky might be interested in doing a show,” explained owner Steve Crimmel. “‘Definitely,’ I replied. Iain Matthews is a folk legend! [He’s] one of the founding members of the British folk rock band Fairport Convention, and also well known for his work with his own band Matthews Southern Comfort, and as a solo artist. We’re so fortunate to have Iain play here on the Central Coast.” Pianist Egbert Derix will accompany Matthews.
Cal Poly Music Ensembles will play contemporary chamber music at SLO Old Mission Church this Friday, Feb. 6, at 8 p.m. “A Night at the Mission” will feature performances by a string quartet, saxophone quartet, flute ensemble, clarinet ensemble, trumpet ensemble, brass choir, brass quintet, and woodwind quintet ($9 for students and senior citizens and $12 for the public; 756-4849).

Celtic trio One Lane Bridge—William Coulter, Aria DiSalvio, and John Weed—play for the Red Barn Community Concert Series in Los Osos on Saturday, Feb. 7 (potluck at 5 p.m.; concert at 6; $15). Expect “unique, artful arrangements of traditional and contemporary tunes. Fusing folk styles from Ireland, Scotland, Sweden, and Spain with modern influences results in something both ancient and cutting edge—a rhythmically vibrant, melodically engaging chamber-folk music at home in the concert hall or on the dance floor. The concert will feature music from their recently released CD, One Lane Bridge,” said organizers.

“They had the joint jumpin’ their last time there and are back by popular demand,” gushed promoter Cliff Stepp of The Luis Oliart Band, which returns to D’Anbino Cellars on Saturday, Feb. 7 (7:30 p.m.; 21-and-older; $10; 227-6800 for reservations). “From Carnegie Hall to the House of Blues with the Central Coast in between, Oliart Band features Debra Windsong, locally famous for her soulful blues harmonica skills and vocals,” added Stepp, who said to expect an evening of blues, soul, and rock ’n’ roll.

Pop folk chanteuse Cleopatra Degher sings brightly arranged and breezy songs that sound quintessentially Californian—even though the San Diego native grew up in Sweden before returning to the Golden State when she turned 18. Her debut album, Pacific, is warm and inviting, guided by her lovely voice, which will be on full display on Sunday, Feb. 8, when she plays Sculpterra Winery for the Songwriters at Play showcase (1 p.m.; all ages; free).

This Sunday, Feb. 8, head to Cambria’s Santa Rosa Catholic Church at 3 p.m. to hear some of the small ensembles of the SLO Wind Orchestra ($15; more info at 464-9434). “Chamber music, performed in a more intimate setting, offers the audience a close and personal interaction with the performer,” according to organizers. “Originally composed to be played in living rooms and parlors of the wealthy, chamber music offers a variety of sounds and colors depending upon the instruments used. From the soft, mellow sound of the flute to the boisterous trombones, there is music for everyone’s tastes.”

This Sunday, Feb. 8, come support a benefit for Templeton Schools Music and Arts Programs at the Templeton Performing Arts Center at 4 p.m. ($20; 237-0054). Joseph Seyedan, a Templeton High School sophomore and classical guitarist, will open the concert. He’s the current G. Roger Bailey Classical Guitar Scholarship recipient, he played a solo concert in Los Osos, and he was the minstrel in his high school’s production of Romeo and Juliet. Beppe Gambetta headlines the show. The Italian musician has a deep affection for both American roots music as well as the music of his native country. This benefit program is unique in that other than artist fees, all proceeds go directly to music and arts programs.