It became a near nightly occurrence last summer.

As the bustling, sold-out campgrounds at Lopez Lake fell to a hush in the wee hours of the mornings, American black bears would lumber onto the premises in search of food—scraps on the ground, open bags of trash, or coolers left outside.

"The campers are the big thing. The more they leave stuff out, the more the bears get comfortable," said Matt Mohle, a supervising park ranger at Lopez Lake, which borders the Los Padres National Forest southeast of Arroyo Grande. "Some people will walk up to the bear dumpster and then set their trash on top of the bear dumpster, or next to it."

Rangers at the popular San Luis Obispo County park know the issue well. They're the first to respond to bear sightings and are tasked with both chasing them out and educating campers on the importance of a clean campsite. Not everybody listens.

"We're the problem. We're in their territory," Mohle said. "We do a lot of education, but there are still a lot of people who don't know how to properly camp. The bears always go to the dirtiest campsites." 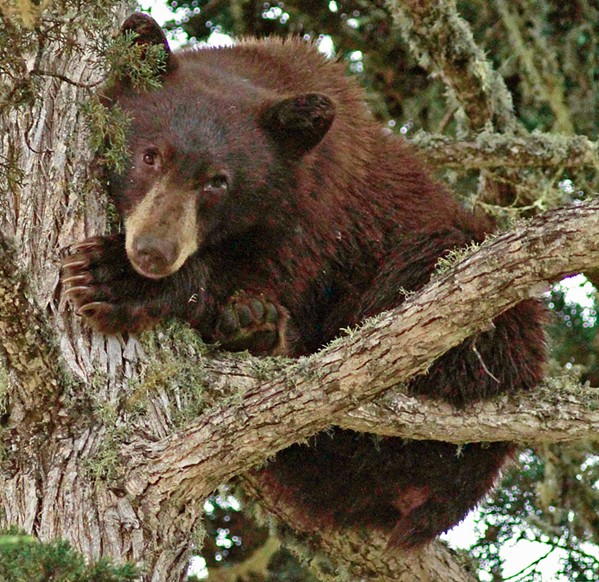 Lately, bears seem to be getting more than enough food to justify their return. While black bears have long lived near the lake with more than 350 developed campsites, the number of bear encounters at Lopez has gone up significantly over the past few summers. Last year, the enthusiasm for camping amid COVID-19 only brought more visitation to the park, and with that, more breadcrumbs for bears.

"The bear sightings and interactions tend to fluctuate from year to year. Right now, we're in a cycle where there are a lot of bears around," Mohle said.

While no altercations have been reported between bears and campers, their growing presence is enough to concern county officials. The bears seem be getting more accustomed to people and the campground, Mohle said. They're harder to scare away and are more "tactful" in searching for food, which has led to a few instances of property damage to RVs and trucks. It's the kind of problem that has spiraled out of control in popular national parks like Yosemite—which is exactly the kind of situation SLO County is hoping to avoid.

"It's definitely something that we take super seriously," Mohle said. "The last thing we want to have happen is for a bear to get so comfortable that they decide they're going to come into someone's campsite with people there and start ripping through their cooler right in front of the people and accidentally hurt somebody."

The tactics used to drive a bear out of the park range from banging pots and pans together, to sounding an airhorn, to calling the Department of Fish and Wildlife, whose rangers will come out and shoot them with beanbag rounds if necessary.

"It's not very much fun for the campers to have to watch that, but it's super important to make the bears afraid of humans," Mohle said. "They need to have a healthy sense of fear, otherwise that's when it becomes an issue."

Mohle noted that the county parks department has taken steps to curb the problem over the years, including installing bear dumpsters all around the park.

"We used to have free-standing trash cans. We've eliminated all of those," he said.

Rangers also remind campers to lock their food and coolers in their cars and throw away all trash before they go to sleep. Beyond that, Mohle said the next step would be to install individual bear boxes at the camp sites. That's an expensive proposition that the county hopes doesn't become necessary.

"We have close to 400 campsites here and to put into place 400 bear boxes, that would be a massive effort and a significant amount of money," Mohle said.

Mohle said he doesn't believe that the surge in interest in the outdoors over last summer amid COVID-19 played a major role in exacerbating the bear problem, reiterating that it's been a challenge at Lopez Lake for multiple summers now. But he also acknowledged that the pandemic may have brought out less-experienced campers to the park who may not be as educated about how to behave in the outdoors.

The spike in visitation to parks and natural areas during COVID-19 is a phenomenon that Bryant Baker, conservation director at Los Padres ForestWatch, said he's pondered quite a bit over the past year.

After the initial stretch last spring where millions stayed at home to guard against the virus, people then flocked to the outdoors once restrictions were lifted.

What the impacts of that dramatic swing were on wildlife—positive and negative—are still under study.

"It made for a pretty unique situation that I don't think we've seen before in recent decades," Baker said. "I think a lot of people got to experience places that they haven't before and hopefully gained a better appreciation for our public lands we have in the region. I think that's been a positive.

"And we have to wait and see if there're any long-term damage from that surge period where there were maybe more people in certain areas than those places could handle," he added. "We'll have to see." Δ