Halcyon Store and Post Office to close on March 15

Sandra Strohman has worked at the Halcyon Store and Post Office off and on since she first moved to the Oceano area more than 30 years ago. The store has served varying purposes since its inception in the early 1900s, at one time operating as a library, gas station, and money order purchasing business all at once. When Strohman started working at the store back in the early '80s, it was just beginning its transformation from a grocery and variety store to the spiritual gift shop that now sits at 936 S. Halcyon Road. 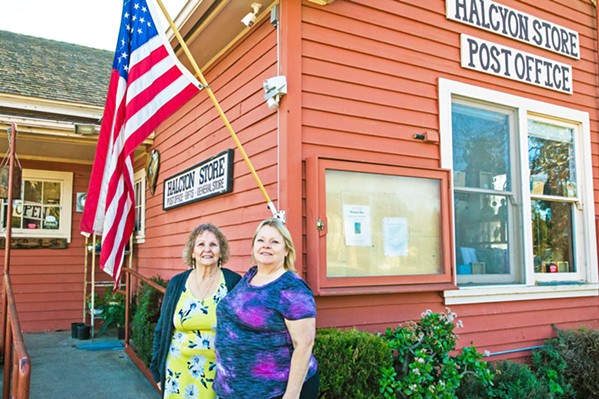 As a clerk, Strohman said she used to cut hunks of cheese off of full wheels for customers between taking letters and packages for the mail. The store had a big machine people could use to make their own peanut butter; hosted craft fairs; and, of course, sold products like the books, crystals, sage, and incense still in stock today. Strohman's daughter, Louise Welch, said she always looked forward to visiting her mom and helping out at the quirky shop.

"My first car in high school I came here and got a crystal, and every car since I've had a crystal from here in my car," Welch told New Times. "And it's just a place I would come visit my mom. I moved away for a little bit, and every time I'd come visit my mom I'd stop here, walk around the store. It's just calming."

In 2015, Strohman and Welch took ownership of the business and carried on Halcyon's hybrid gift shop and post office tradition, adding their own flair through the addition of community workshops, classes, and psychic readings. It's a unique little store that people of all kinds from all over California visit on their way out to the dunes. But that legacy is coming to an abrupt end.

On Jan. 19, Welch and Strohman received a letter from their landlord notifying them of the termination of their month-to-month rental agreement. Brief and to the point, the letter included no information as to why the contract was being terminated, simply giving the mother-daughter team 60 days to move out.

So the Halcyon Store and Post Office is closing on March 15, leaving Halcyon without a post office for the first time since 1908.

Welch and Strohman are hoping to continue selling their products online until they find a new location in San Luis Obispo County—after taking a much-needed vacation, that is. They're in good shape financially and hopeful about what the future will bring. Although the eviction came as a shock, they're not worried about themselves or their business.

It's the loss of tradition that hurts. It's the thought of tourists who have made annual trips to the store and dunes for decades suddenly finding the shop closed. The thought of former residents being unable to show their kids and grandkids where they used to go for rock candy and ice cream as kids themselves.

"It's been around that long," Welch said, "and we're just heartbroken that it—the Halcyon Store—will be no more."

It's not clear why the Halcyon Store is closing or what will replace it. The Temple of the People, a nondenominational religious and philosophical organization, owns the property and announced the closure publicly in a vague Facebook post on Jan. 21.

"There are big changes around the world right now and Halcyon is no exception," the post reads. "Holding on to our hats as the post office is closing our little post office location. Incoming mail for Halcyon residents will be placed in town at a designated spot. The Halcyon Store building will undergo renovation in order to preserve its historical status and character."

The Temple went on to thank Strohman and Welch for their years operating the post office and shop.

In a statement to New Times, Temple Guardian in Chief Eleanor Shumway remained ambiguous. Although she said Halcyon residents would still be able to pick up their mail at a "shared pickup point," she didn't go into any further detail, saying she couldn't comment on any ongoing negotiations.

"While the post office and store have certainly been of great benefit, we constantly reevaluate how best to serve the community as circumstances change," Shumway wrote. "The COVID-19 pandemic has shown each and every one of us how adaptable we truly must be."

Whatever the reason, Arroyo Grande resident Carol Berger is going to miss her favorite gift shop. Berger has lived on the Central Coast for about 30 years, and she said no matter the person, no matter the occasion, she could always find a something for everyone at the Halcyon Store.

"You walk in and you just feel like it's a hug, you know what I mean?" Berger said. "I can't think of another store in this whole San Luis Obispo area that has such unique items." Δ