Every day, 18,000 cars drive past Autumn King's restaurant. The new chef and owner of Halfway Station told me those traffic audit numbers are the reason she and her family picked this location, halfway between Morro Bay and Atascadero.

On an early fall day, the place was hopping with families, couples, and a lively bar crowd. The place is open and light. High ceilings and long, undressed windows lead way to an open floor plan with a couple of tables upstairs. On the back porch you'll find bocce and games, music, and a little free library.

The place before was a lovable hole in the wall, which fit a niche for a while, but the new owners have brought in a welcoming, hospitable element; locally sourced gourmet menu; beautiful wine list; and immaculately clean bathrooms.

"We joke that we had to make it a place for a woman to stop by herself and use the bathroom," King laughed, saying they should have made that their slogan. "Now kids come in to use the bathroom. They even come in themselves, so we must be doing something right!"

No reservations needed—just swing right up to the counter, check the menu and specials up on the chalkboard, order, and find a comfortable table. The vibe is friendly and laid-back.

"We want it to be a place where people want to hang out," King said about the open format and welcoming back porch, where the bands now play. "Don't just show up, eat a burger, and run. Hang out. Bring a book. Play some games ... ."

King is originally from Tennessee and has a little buttery twang in her accent. She has lived and worked all over the states, from North Carolina to Colorado, but she moved to SLO County to be closer to her boyfriend's family. She is a hospitality industry veteran of 25 years, and you will see her peek out the kitchen window to receive orders from the crew. She started out apprenticing under a classically trained chef at a French restaurant at age 17 and has worked every job there is in a restaurant since—she can even make ice sculptures. King said she spent the last decade bartending for a British pub, where she "truly perfected the art of cursing," she said.

King's boyfriend, Fox, who spent a good part of his childhood in SLO County, runs the restaurant with her 80 hours a week, cooking and bartending.

"We like to do our best to spend our money where we make it," she said, adding that they feature and support local food, wine, and beer purveyors: from Corberosa Coffee to Bryson's Honey.

Zara Zaitz was our lovely server for the evening. I'm familiar with the term "locally sourced," but Zara was pointing out which trees the lemons and walnuts came from, just outside the restaurant's window.

"Zara works every day we are open," King said.

I saw her handle every table inside and outside while Connie Zaitz, cheerful and tireless "Mom" of the house, bused tables and did whatever else had to be done. King said she is "head gardener, dishwasher, and overall MVP for her cheerfulness and hard work."

My husband and I found many intriguing items on the menu. We're usually suckers for a good cheese plate, and the appetizer menu stated that theirs is made with Farm Girl Creamery's triple cream brie, Central Coast Creamery's Holey Cow and Big Rock blue cheese, dried fruit, jam, and Back Porch Bakery baguette. 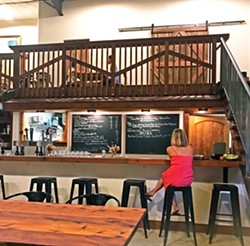 Tempted though we were, we decided on the spicy Korean cauliflower wings as a starter. The crispy cauliflower florets were sticky and semi-spicy in a gochujang sauce and were served with a creamy cilantro dipping sauce. We were a little giddy that we were tasting something exotic and yet down-home comforting, unlike anything we'd ever had before.

The main dishes consisted of about seven choices of anything from a bratwurst sandwich (with J&R Meats German sausage and vintage cheddar) to the Rock Burger, with Central Coast Creamery Big Rock blue cheese, thick-cut bacon, caramelized onions, and whole grain mustard sauce with hand-cut, twice-fried fries. King can make a Beyond Meat plant-based patty instead, if you like.

We ordered the Station Burger, as we were intrigued by the "special sauce." Our burger was satisfyingly perfect, with local grass-fed beef, vintage cheddar, and good ol' iceberg lettuce.

King later revealed to me the hottest item on the menu. Apparently, Connie Zaitz's cheesecake has a cult following.

"I don't even have to put it on the menu and it sells out," she said.

King's cool, refreshing lemon semifreddo is also regularly on the menu. We tried the peanut butter chocolate semifreddo—a frozen mousse-like ice-creamy dessert—at King's suggestion. She said that after she made it, she ate a piece for breakfast, and I don't blame her one bit.

"Our menu is still evolving," she said, adding that she hopes to feature more dinner entrees, local seafood, and steaks in the future.

King said she's also been thinking about offering breakfast, and word is they may even start a little market as time goes on.

Just as fun and interesting as the food are the bands playing at Halfway—King's brother-in-law, Zeb Zaitz, is a local musician and handles the booking for live music. On the music menu are the SLO County Stumblers, Joel Tolbert and the Tolbert Family Band, and the Charities—bluegrass, folk, jazz and Americana, with bookings that totally make sense for our area.

If you haven't already done it, go meet the family Halfway! Δ

Flavor writer Beth Giuffre is more than willing to meet you in the middle. Send sharable portions of tasty tips to bgiuffre@newtimesslo.com.