When the Shell Beach Methodist Church was put on the real estate market a year ago, many developers and investors were drooling over the opportunity to acquire the longtime Central Coast house of worship and, more importantly, the valuable seaside property it was built on. 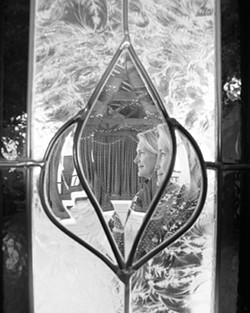 # The land was divided into two lots and a developer quickly scooped up one of them. He eventually demolished the existing Sunday school building and constructed two large homes.

Shelley Malcolm, a longtime Shell Beach resident, wanted to make sure something similar didn't happen to the remaining lot.

"I always loved the buildings and appreciated the unique architecture and their history in the community," she said. "If the buildings would have been demolished and become homes, it would look like another Orange County."

So Malcolm and her friend Garin Sinclair of Arroyo Grande invited neighbors to her house to discuss what they thought about the idea of saving the Shell Beach's sole church building.

"Before we ever attempted to buy it, we wanted our neighbors' support," Malcolm said. "I was unsure how'd they feel, but everyone was so excited. It was a community brainstorm."

Malcolm and Sinclair then sought financial assistance from their husbands. They closed escrow in June and six months later reopened the church, renaming it La Perla del Mar.

Now, the church has become a community event center in addition to providing religious services. La Perla del Mar offers live theater, concerts, films, acting classes, dinners, workshops, and yoga. The historic schoolhouse--first built in 1835--has been converted into a space for weddings and receptions.

"We wanted this to be recognized as a place where people could come together and become of hub of cultural activity," Malcolm said. "It looks like our goal is coming true." Don't miss La Perla's latest art show, Holy Art! with Burly Vreeland and Eric Soderquist, among others on Feb. 29 starting at 6 p.m.