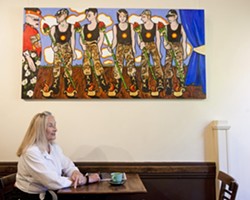 When I meet up with Josephine Crawford at Linnaea’s Café, it’s the first day of her new show in the space. It’s also Memorial Day, a curious coincidence for an exhibit featuring an entire wall that, in Crawford’s edgy-kitsch style, condemns war and all its trappings. This snippet of chance, it turns out, has left the artist sleepless for weeks, wondering if her choice would be deemed offensive. But it’s 10 a.m., and so far no one has hurled a steaming cup against the wall and stormed out of the joint. Crawford is visibly relieved.

Walking into the Linnaea’s this month is rather like striking up a conversation with an interesting stranger. At the front of the place, Crawford’s self portrait grins warmly, an introduction. (Well, it started as a self-portrait, before her husband told her it more closely resembled Boy George.) Venture down the narrow hallway, and Crawford shares a bit more of her life story.

Once, while working as a sorority cook, Crawford found her imagination caught by the side profile of a girl with the features of a Grecian coin. So began her Greeks series, several pieces of which hang in the hallway. The series is an intriguing crossover of the collegiate Greek system and ancient mythology—a blending, perhaps, of high and low culture.

Then, in the dining room, are Crawford’s many faces—eerie, too-white things that cram themselves into their frames as if straining to see out. This series was a project the artist undertook in the ’90s, challenging herself to paint rapidly, without planning.

Oddly, the artist told New Times in 2009, the face painting series, after running its course, came to a natural stopping point.

“It lasted about four or five years,” she said. “My husband likes them a lot. A few months ago he asked why didn’t I do more. The weird thing is, I can’t do them now. It was like it wasn’t the right time anymore.”

Then there’s that wall, the one that had her agonizing for weeks. Here, the conversation takes on a more somber tone. The work in question is comprised of two new, large-scale paintings, centered on Crawford’s 1991 rendering of Lysistrata, the heroine of Aristophanes’ drama of the same name. Lysistrata (literally “army-disbander”) is a play about one woman’s valiant mission to end the Peloponnesian War by persuading the women of Greece to withhold sexual privileges from their men.

“Make art, not war,” the underside of the painting reads.

“I’m so glad she let me put that up!” whispered the artist, referring to Linnaea’s owner Marianne Orme. “I brought an alternative in case she couldn’t stand it.”

The artist’s newer works flank Lysistrata on either side like an argument—militaristic-looking rows of men on one side, women on the other, lining up on a stage as dancers.

The dancer, as it were, was among the artist’s first subjects. Having danced for most of her life, Crawford declared herself a painter upon moving to the Central Coast, creating her first pieces by pressing her body against an upright canvas, tracing around it, and working from there.

Crawford is the type who seems to have lived several lives already. The artist left her London home at 16 and was a dancer for the first half of her life or so. After living in Italy for 13 years, she reinvented herself as a costume designer in Las Vegas. That occupation lasted a decade, by which time a restless Crawford was ready to move on again.

“I thought, ‘bloody boring,’” she explained in her charming lilt, silver peace signs dangling from her ears. “I mean, it was lovely, the feathers and everything. And the jewelry and the beautiful people … and then it got boring, because it was always ‘sexy,’ and after a while, it loses the novelty, to say the least.”

Crawford chose painting over going back to school, and recalls writing in her diary: “rather than waste 10 years getting a master’s, I’ll do 10 years of painting, and see what comes up.”

Thirty-odd years later, she doesn’t regret her decision. And while her style and subject matter have evolved over the decades, Crawford’s bright, deliberate, kitsch-tastic essence has been retained.

“I’m a bit of a stuckist,” she said, a reference to a term coined by crazed London artist Tracey Emin, she of the famous tent installation (literally a tent, titled Everyone I have ever slept with 1963-1995, appliquéd with the names of everyone Emin has slept with). Emin dubbed her boyfriend’s comparatively normal-looking artwork as “stuckist,” a term that, like “punk”—and, for that matter, “impressionist”—was meant derogatively but happily adopted by the demographic it was meant to condemn.

Having tried minimalism on for size, and asserted that its only logical end is, well, not painting at all, Crawford is happy to be stuck.

“They are so corny and wonderful,” Crawford said gleefully. “I’m honored to be called a stuckist.”

Certainly all the punks, Fauves, and impressionists out there would agree.

Arts Editor Anna Weltner is stuck in Lodi again. Send directions back to SLO to aweltner@newtimesslo.com.