Happiness is the whole hog: Granada Bistro is roasting a pig a week for an epic farmers' market feast

At roughly 200 pounds, the spotted Berkshire hog is rotund, marbled, and ready for harvest. His card, so to speak, is up. One day he’s snorting around the trough on a Fresno farm, and the next, he’s packed onto a refrigerated truck bound for San Luis Obispo.

Executive Chef Justin Casey of Granada Hotel and Bistro has big plans for this particular animal. In fact, every aspect of the creature’s transformation from hog to dinner will be celebrated, honored, and savored.

This task will require not only a dedicated chef, but a tireless sous chef, meticulous kitchen staff, no-nonsense grill master, patient cashier, dogged PR person, and hungry reporter (in that order). It will truly take a village to feed a village.

But first, a bit of backstory on the pork to come.

See, when Granada Hotel and Bistro decided to toss its proverbial chef’s hat into the Thursday night Farmers’ Market ring last month, no one could expect what Executive Chef Casey would think up. One thing was certain: He wasn’t about to throw some ribs on the ’cue.

That’s how all of this pig stuff got started. At Granada, no one’s worried about “more work,” as long as the extra toil results in hard-earned flavor points. You can call Casey crazy for vowing to roast one whole pig a week for Farmers’. I call him inspirational.

“We saw this as a challenge for ourselves,” Casey said of the whole hog experiment. “We’re putting a lot of work into this, and as a result, offering a lot of different flavors for that one animal.”

That extra “bang for your buck” includes pork sandwiches, tacos, and even crispy skin chicharrones, all served up street style each Thursday on the corner of Higuera and Chorro, not far from Granada. More on that later.

If you want to know how this great pork is prepped and plated street side, you have to follow the pig, so to speak.

The whole pig (sans head) weighs about 135 pounds—about the size and temperament of a very inebriated college freshman. Casey and his crew get to work moving the pig into the Granada kitchen for one intense, 24-hour marinating session. Patience is a virtue that will pay off in flavor and juiciness. 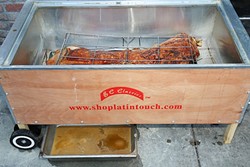 Next, the pig is transferred to a wood and aluminum Cuban Caja China barbecue box—a low, wooden cube on caster wheels. Never seen one? I hadn’t either. Casey explained that the inspiration came, as it so often does, when Granada Co-Owner and world jet-setter Kimberly Walker snapped a quick pic on her iPhone.

“Whether Kim’s in New York or Japan, I’m always getting interesting street food photos from her,” Casey said. “This time, she sent a picture of the pork and this little booth on a Cuban street corner. It was literally a box and a guy holding tortillas and a bottle of hot sauce.”

From there, the chef’s wheels started turning. Casey imagined all the fixings he could add to the mix: grilled chile lime watermelon, charred corn on the cob with cojita and chipotle butter, a sprinkle of cilantro, pickled veggies, and green apple slaw.

“We started talking about what we could do at Farmers’ to utilize a barbecue space,” the chef said. “Of course, we wanted to do it Granada style.”

What, you ask, is Granda style? It’s a balance of freshness, comfort food flavors, and ingenuity (take, for instance, their housemade Fruity Pebbles ice cream, which sounds as good as it tastes, or their Cluck Mondays fried chicken, cooked to perfection).

The pig gets this same kind of love ... times a million. Cooked over charcoal in the box for about 10 hours, it sizzles in its own mouthwatering juices. Later, the hog will get another six hours of braising. Once cooled, the meat is a sight to behold, with skin so crispy Casey likens it to glass.

I was lucky enough to sneak a peak at the meat as it cooled down on a balmy Wednesday evening. To my surprise, I found the pig in its box, resting behind Granada.

“We found that it’s better for the pig to cool down a bit outside. After about an hour, it’s safe to pick up and handle,” Casey said, noting that “safety” is muy importante when you’re dealing with more than 100 pounds of meat.

Thanks to a handy design that sandwiches the pig between two metal sheets fixed with handles, Casey and his sous chef Kenny Bigwood can hoist the hog out of its box and back into the kitchen. This is where the sausage is truly made, folks. 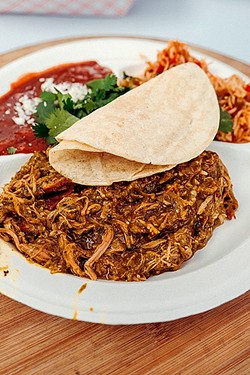 Of course, it can’t be that easy, though. Granada’s kitchen is not a vast space with tons of room for breaking down a whole hog, but Casey and his crew are taking on the challenge every week. Although the restaurant owners spearheaded a multi-million-dollar renovation in order to reopen the bistro, hotel, and spa in 2012, the building’s “bones” are very much of a different era.

Built in 1922, the original Hotel Granada sat adjacent to the Elmo Theatre, SLO’s premiere Vaudeville venue, an oasis for traveling artists and eccentrics. After a stint as a brothel, the hotel fell into disrepair, closing its doors in the 1960s. Eventually, a small, four-table bistro rose from the ashes, but the building—and bistro—was almost wiped out when it was slated for demolition in 2010. Instead, it now proudly stands as an emblem of SLO’s past as well as its future.

“Everyone has this perception that Granada is a destination, only for dates,” said PR rep Mark Dawson. “It is great for special occassions, but we don’t want people to forget about the history; that it was all about saving the bistro that was here, bringing it into the 21st century, but still keeping it as a neighborhood joint.”

It’s in that joint’s cramped yet joyful kitchen that Casey and the gang get down to the business of turning our humble hog into good eating.

Pork belly is caramelized on the grill and tucked into a crispy (addicting) bahn mi sandwich with carrot, cucumber, jalapeño, and creamy cilantro aioli. Smoked ham is made into a second sandwich slathered with cherry cola barbecue sauce and green apple slaw.

Last Thursday, I saw all kinds of people standing in line as the Granada team worked in unison to barbecue, plate, toss, and dress. Meals are served alongside mixologist Dominique Gonzales’ Root Elixir sodas, bubbling with herbs and market fresh fruit.

Chances are, you’ve never seen the restaurant like this: approachable, chill, sweating in the hot sun. If you ask Casey, that’s kind of the point. Nothing worth having is ever easy. But the chef believes eating it should be.

“Even though the price isn’t high, there’s a ton of work that goes into every item we’re selling at the market each week,” the chef said. “For us, this is an easy way to touch, and feed, a lot of people in the community.”

Hayley Thomas has been touched by the power of pork. She can be reached at hthomas@newtimesslo.com.