Now get the hell out of here...

I love Cal Poly. I love the energy its students bring to the community. I enjoy seeing all the peppy young things engaging in their shenanigans about town. I also love it when they leave for the summer.

I know it’s hard to tell when I’m being sarcastic (always) or not (never), but I seriously do like the students. I just always love summer more because the whole tone of the town changes. The traffic improves. People—locals and the few summer school students alike—seem happier, mellower, less prone to honking their horns and flipping each other off, peeing on lawns and calling the noise police.

Of course, local businesses—especially bars and clubs—are going to miss the little whippersnappers É and their disposable income. To remind the students that they’ll be missed, Downtown Brew and Numbskull Productions have teamed up to present a going away concert by ska-punk favs, The Mad Caddies, this Friday, June 13.

The club and promoter are “paying this concert down,” meaning instead of charging an admission fee that would cover what it cost to bring this show to Downtown Brew, they’re only charging half price and eating the rest. That means for a scant $6, those 21-and-older can see Klockwyze open at 8:30 p.m., followed by Supervillians, and then The Mad Caddies. Cheap, cheap, cheap! More cheaps than a chicken coop at Easter!

The Caddies have become favorites because of their patented blend of rock and roots reggae that reminds listeners of The Clash, The Police, and Sublime—three megastars of rock. They also put on an awesome stage show.

The band is touring in support of its fifth full-length recording, Keep It Going, which “takes the listener on a musical journey from lively Jamaican dancehalls to the underground DIY music venues of New Orleans.” Fat and sassy horns, melodic guitar work, a kicking rhythm section, and fun-tastic lyrics make this band irresistible.

After this show, we bid you goodbye, Mustangs! Good luck in the future! And if you’re coming back next fall—you super seniors know who you are—have a cool summer and save your money. We’re raising the price of beer as soon as you get back.

The great outdoors!
Now that those damn Poly punks are gone, we can let out the secret of summer for real: outdoor shows! With summer come all kinds of weekly al fresco concerts.

The Concerts in the Plaza series, which take place every Friday evening from 5:30 to 7:30 p.m. in the Mission Plaza, kicks off this Friday, June 13, with Still Time, whose breezy, melodic Cali rock sounds like Jack Johnson meets The Beach Boys meets Ben Harper meets Dave Matthews at the beach at dusk for a campfire sing-along. They’re also having a media blitz that day. Catch Still Time at 6:30 a.m. on TV station KSBY’s Morning Show; at 8 a.m. on radio station Coast 101.3 FM; and at 4:15 p.m. on New Rock 107.3 FM.

Last week was Downtown Brew’s first of seven free Avila Beach outdoor concerts, and word on the street is that the scene was off-the-hook. This Saturday, June 14, you can catch three bands for free on the Promenade in front of the pier from 1 to 5 p.m. Atascadero-based all-girl trio Jade the Band opens with their alternative rock stylings. Next up is groovy Morro Bay surfer/artist/singer-songwriter Shane Stoneman. Last, but not least, hear Atascadero’s indie/alt rockers The Lakes, a popish act that sounds like they’d go great with a beer on Mr. Rick’s patio.

Complete your weekend with an outdoor show at Sea Pines Golf Resort on Los Osos, which this Sunday, June 15 presents local singer-songwriter Frank Parades from 2 to 5 p.m. Go ahead, get totally loaded! They have stay over room specials of $79 a night on Sunday evenings.

Metalheads, start your muscle cars!
I’m not into metal; I admit it. It’s not the noise—I love punk, for instance—it’s all the screeching and, worse yet, the seriousness with which most metal bands regard themselves. But I know a lot people who, like my Hessian officemate Steve E. Miller, New Times photographer, happen to like metal, and so Miller agreed to write something about The Ocean, which plays Monday, June 16 at Downtown Brew with Intronaut, Kylesa, Lair of the Minotaur, The Destro Withered, and Perceive The Symphony. This 7:30 p.m., all-ages show costs $10. So without further adieu, Miller’s preview:

“Giving a little past history, I ran an extreme metal fanzine in the mid-’90s and an extreme metal record label into the new millennia.† Although I don’t do either now, I still am heavily into what is being released currently in the realm of extreme music. Usually I go to record label Web sites to listen to new music, sometimes to Myspace to check out bands, then try my best to buy the CDs at Boo Boo’s.

“I’m not sure how I found out about The Ocean, but all I know now is that I am very glad I stumbled across their name and then their new CD, Precambrian. A little space rock, a little hardcore, a little classical, a little death metal—all wrapped up in a package that delivers an intensity and bi-polar musical extravagance that is only superseded by Opeth (who, by the way, has an excellent new album out called Watershed) and Enslaved.

“I had the chance to listen to some of The Ocean’s older stuff, and while I liked it fine, it’s apparent that their true calling lies with their newest material. It’s not often that an extreme metal band can get away with effectively blending the brutally intense and mellow flowing parts, but The Ocean delivers a musical experience that really pulls you in and makes the hair stand up on the back of your neck.

“If your curiosity is piqued, then the greatest thing about all of these words is that they are playing at Downtown Brew this Monday. The bill is rather large, which doesn’t really make for a good show because the top billed act will come on late and they won’t play for as long as they really should. I’m gonna cross my fingers and hope that The Ocean goes heavy on their new release and the other bands are worth my hard earned cash. Word has it from Frank at Boo Boo’s that Lair of the Minotaur is something to hear also.”

Stick to the photos, bub.

More music...
Soulful, sexy, Seattle-based singer Cristina OrbÈ is—according to her calculations—half brutally honest, half beautiful, and half bizarre. Clearly her math skills are lacking, but her sensual and arresting sound makes up for it. She plays Linnaea’s CafÈ on Friday, June 13,
at 8 p.m. 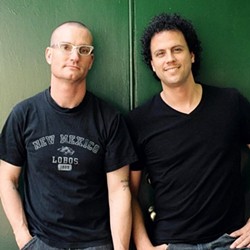 Gillen & Turk play Big Sur’s Henry Miller Library on Friday, June 13 at 7 p.m. Grumbling Ginger opens the show. Gillen & Turk are mainstays of the fertile Hudson Valley singer-songwriter scene. Matt Turk (guitar, mandolin, vocals) and Fred Gillen, Jr. (guitar, bass, harmonica, washboard, and vocals) joined forces as Gillen & Turk a year ago and have quickly made a name for themselves as fearless folk-rockers who mean what they sing. Visit henrymiller.org for details.

Jonathan Richman, a superstar of college radio in the 1980s, and the guy who did all those quirky songs in the movie There’s Something About Mary, plays Big Sur’s Henry Miller Library this Sunday, June 15 at 3 p.m. Visit henrymiller
.org for details. 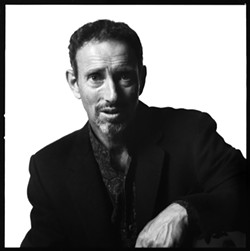 BANDECKY.COM, which recently hosted the killer Battle of the Bands at Hoover’s Live, brings another great event to the Atascadero venue this Sunday, June 15, for an all-ages, $5, 4 p.m. show. Raised by Radio and Slick Bishop will headline, but BANDECKY.COM also held open auditions of local school-aged bands to open the show.

This Sunday, June 15, the Famous Jazz Artist Series at the Hamlet in Cambria hosts pianist-vocalist John Proulx and his trio (Barry Zweig, guitar; Luther Hughes, bass) to perform “A Tribute To The Nat King Cole Trio.” Grammy-winner Proulx has been recently compared to the piano style of Cole and vocals of a young Chet Baker. The trio will be joined by concert co-producers Charlie and Sandi Shoemake (vibraphone and vocals). There’s a $15, 4 p.m. show; a $12, 7:15 p.m. show; or see both for $20. Call 927-0567 for reservations.

Record label Fania built for salsa what Motown built for soul: an independent record label that corralled some of the finest musicians to the task of making the sound they knew best. But outside of the salsa and mambo generated for the clubs, many of Fania top brass dabbled with the groove of R&B they loved, creating a sub-genre of Latin soul that eventually transformed into percussive-rich funk that was taking hold across America. Here, on this well curated collection, Fania pulls out an exceptional cast of musicians and their funkiest tracks. Joe Bataan’s "I’m Satisfied" reclaims his title of creating the Latin soul craze with a uptempo groove that has the hight stepping zest of the Temptations. The perfect recipe of Latin funk comes with Gilberto Cruz’s cover of James Brown’s "Hot Pants." Adding the flair of vibes, congas, and continual bright horns, it’s a well simmered menudo that would have scorched the South’s chitlin circuit. An absolute winner. 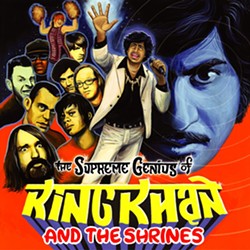 Juggling the ferociousness of early garage rock with the soul explosion of a 12-piece Muscle Shoals ensemble, King Khan & The Shrines confidently conducts a three ring musical circus built upon the live soulful sweat of Wilson Pickett, the bombastic blues grit of Blue Cheer, and the sonic and lyrical playfulness of Frank Zappa. The Supreme Genius Of King Khan & The Shrines collects the back catalog of these marvelous misfits from four different previous indie labels, giving any curious ear a prime opportunity to catch up on their back story. With a band that features a 60-year old percussionist who backed Steve Wonder and Curtis Mayfield (Ron Streeter), and a French rockabilly saxophonist (Big Fred Roller Coast) along with ten others, its like the weirdo team that eventually wins it all. Waffling between the raspy vocal energy of Eric Burdon ("Destroyer"), and tireless hysteria of a faux-James Brown complete with a skronky band breakdown ("Land Of The Freak"), you’ll stay glued to the genius of King Khan.

Glen Starkey finishes what he sta... Tell him what a total jer... he is at gstarkey@newtimeslo.com.