They’re seen in the oddest of places around San Luis Obispo. Head to Home Depot, and one of them occupies one of the primo parking spots. Look for parking at the downtown post office, and there’s another one, seeming to defend its turf from normal vehicles.

They’re those electric-vehicle recharging stations that are seen, but rarely seen used, around town. Even with the recent surge in interest in electric vehicles, the stations serve few users because they’re mostly wired with older “puck-style” chargers that can’t be used by the electric scooters, slower-speed neighborhood cars, or homemade versions of electric vehicles that are generally in use around the area. 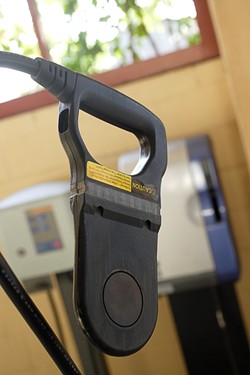 Mostly these days the stations serve as testament to something or other. Depending on one’s point of view, they represent either a technology that, like the Beta tape player, failed to gain traction, or they represent the cowardice of a state bureaucracy that gave up a needed push toward green cars just when progress was within reach. Or, perhaps, they represent the overzealous efforts of a city that required developers to spend money on a green technology even as it was becoming obvious it wouldn’t last long.

In all, there are at least four recharging stations locally. According to electric car enthusiast Jeff Spevack, that works out to roughly one for every working electric car in the county that can still make use of them.

Fortunately for Spevack, he has one. Spevack is the owner of SLO’s Continental Motor Works and drives a 2001 Toyota RAV4 EV that has logged 50,000 miles. It’s entirely electrically powered, goes about 115 miles on a charge, and he uses it for daily commutes.

“It really is a shame,” he said of the puck-style charging stations. “There’s only a handful of vehicles that are still able to use them.”

Some of the recharging stations, he says, no longer work, but Spevack says he doesn’t have the heart to demand costly fixes when he would be one of the only people to benefit Spevack has his own recharger at home.

The recharging stations have their roots in a statewide effort to have a portion of all vehicles on the road release no emissions. Spurred by the push, General Motors and other car companies invested in electric cars nearly a decade ago and celebrities sang their praises. But, in a story told in the documentary Who Killed the Electric Car? the company scrapped the program—along with most of the cars—after the state, under heavy lobbying, nixed its requirement.

Locally, the city required that certain developments include the charging stations as part of efforts to mitigate their environmental effects.

Former SLO City Council member John Ewan, who owns the green energy company Pacific Energy, said he recalls “recognizing that it was going nowhere,” even as the city began to require that projects install the charging stations.

These days, he says, brainpower is going into considering how the charging stations could be put to better use. One idea is to simply convert them into standard outlets so that scooters and newer generation vehicles could use them.

That idea, however, is not without its own problems.

“I have visions of a motor home pulling up and plugging in for the night,” he said.

And, more broadly, Ewan said a large-scale push toward electrical cars must be focused on having them recharged at night, when there are fewer demands on the grid.

But that doesn’t mean the stations couldn’t be turned into pay-for-use stations.

Tom Dowling of the Electric Auto Association said even if there are only a handful of vehicles in the county that can use the pucks, there are several hundred cars on the road in California that can use them. And, he said, it’s important for the future of electric vehicles that there be charging stations in place he said the style of receptacle can be changed later.

“Mostly when I go downtown to the post office,” he says, “there’s already somebody’s in that spot that’s not supposed to be.”