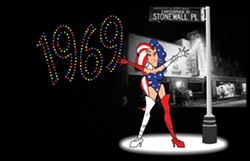 A series of three-minute musical animated shorts produced by TDA Animation, Hard Knock Rock mimics the style of the Schoolhouse Rock educational videos—only this series takes on controversial subjects and cultural taboos. Interventions deals with substance abuse. An upcoming edition talks about STDs, while another explores gender identity. Sufferin’ Till You’re Straight, which is currently making the rounds at LGBT and mainstream film festivals, is an indictment of homophobia in the United States.

Scheve, who serves as director of the series with animator Willie Ito, sees his recent forays into animation as a natural offshoot of his early interest in theater. Though he lives in L.A., Scheve was raised in San Luis Obispo and Santa Barbara counties, and began acting at the Great American Melodrama at the age of 11, and continued to appear in PCPA and San Luis Obispo Little Theatre productions.

“An animation is like theater, in a way,” explained Scheve at a recent interview. “It’s a heightened reality. And so they marry very well.  In theater you’ll overlook certain things; and in animation, it’s the same way, you know: dogs and cats are talking, and it’s normal. That’s why The Little Mermaid and Beauty and the Beast work so well—they’re just animated musical theater.”

Scheve sees the Schoolhouse Rock format as an easy and nonthreatening way to get one’s ideas across. Just as the Saturday morning special was so much fun that kids hardly noticed they were learning about history, civics, and parts of speech, Scheve sees Hard Knock Rock as an ideal venue to introduce controversial ideas.

“These are a lot of little things that make people uncomfortable,” says Scheve of the series’ subject matter. “And they get embarrassed to talk about it. And I find that music is a universal language. When you put things to music, it kind of relaxes and puts people at ease, especially if it’s a good singer and it has a good groove to it. People don’t even realize what you’re telling them until they’re already engaged in it … Or if you talk about naughty things in a funny way, people are a little less embarrassed.”

An upcoming segment about safe sex featuring Martha Wash of the Weather Girls (remember “It’s Raining Men?”) follows an STD-infected gigolo who suffers the consequences of not practicing safe sex. Another short is about “diversity,” but not in the way you’d expect.

“There’s a twist to it,” Scheve explains. “It’s not about ethnic diversity; it’s about gender diversity. It’s not just men and women any more. There are transsexual people. And that makes people really uncomfortable.”

Yet this discomfort can also be a catalyst for self-reflection.

“A lot of people like to come from a religious angle, you know, God this and God that,” said Scheve. “And you know, you haven’t met with God. Until you meet with God and you take a couple photos and they’re up on Facebook, I don’t want to know what you think God thinks, you know?

“Acting in theater, this art form is really about holding a mirror up to society so people can see themselves. And usually when people go to see a play, they don’t always recognize that it’s them. Sometimes you’ll find people who really hate something or something makes them mad, and they leave. And it’s usually something that made them feel something they didn’t want to confront, that they didn’t want to look at. And when you upset somebody that way, they can walk away, they can try to hide, but it's still there. When you’re in bed at night, you’re laying there, and you can’t go to sleep, you just fixate on that thing—I think that’s what art is really about: teaching us about ourselves.”