As upbeat music, people, and laughter emanated from the front patio of Kreuzberg in downtown San Luis Obispo on election night, Mayor Heidi Harmon was inside, dancing.

In a vintage-Harmon red dress that twirled with her movement, synthetic red rose petals affixed to her hair, and a smile on her face, Harmon wore the look of a battle-weary politician cruising to re-election victory after a contentious fight with T. Keith Gurnee for city leadership. 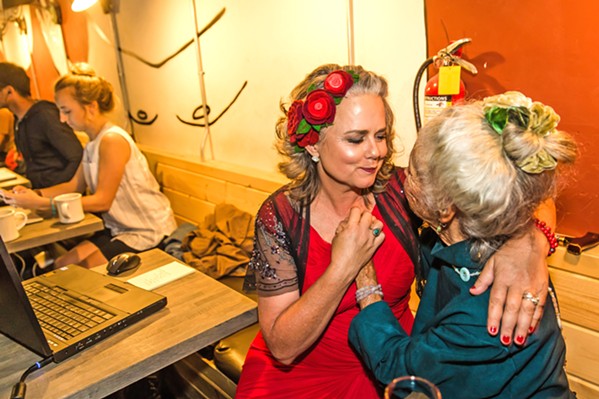 "This has been a really tough campaign," Harmon told her supporters in Kreuzberg. "We have seen fear and misinformation spread throughout our community. But we choose love."

According to unofficial election night results, Harmon handily defeated Gurnee and her other challenger, Don Hendrick—winning 59.7 percent of the city vote. Gurnee claimed 37.5 percent; Hendrick took 2.6 percent. All precincts had reported as of New Times' press time, though an unknown number of Election Day vote-by-mail ballots were still outstanding, according to the SLO County Clerk's Office.

While Harmon and her supporters celebrated heartily, across town Gurnee held a gathering of his own in a much quieter Café Roma, accompanied by City Council candidate James Lopes. Both men fell short in their races, with Lopes narrowly finishing third in a council race for two seats—claimed by incumbent Carlyn Christianson and Erica Stewart, president of the Cal Poly Alumni Association.

Gurnee, Lopes, and council candidate Sarah Flickinger, who finished fourth, shared similar messages—neighborhood advocates striving to temper development and protect SLO's character. As the election night results trickled in, Gurnee told New Times he hoped his campaign had sent a message to the City Council that it should listen more to SLO residents.

"If there's one thing I hope that comes out of this, it's that we have a City Council that doesn't say they listen, they really listen," Gurnee said. "Because they've said they've been listening, but they haven't been listening."

The race for mayor was contentious from the outset. Gurnee's candidacy emerged out of controversy over a bike path that will traverse his neighborhood and remove parking in the Anholm District. A longtime Republican, Gurnee switched his party affiliation to Democrat prior to his run, drawing criticism and skepticism from Harmon. That friction culminated in a blow-up at a SLO Progressives club endorsement forum in August, where Harmon scolded Gurnee and walked out of the debate.

Gurnee's campaign was based on a message of SLO being at a crossroads, with its identity on the line. He promised to push back on state housing laws and reform city policies, portraying the current City Council as a reckless body pushing forward an unbridled progressive agenda.

"This council is out to change the world by changing this town," Gurnee said. Δ