Learn more about Harvest on the Coast's events, dinners, and tastings, at slowine.com.

Every Thanksgiving, a young Stephen Ross Dooley would watch as the grown-ups in his house perform those silly "grown-up" rituals that only seem to make sense years later. Like grabbing armfuls of wine—the sweet, cheap stuff—and lugging the bottles out into the Minnesota cold. There, in the snow bank, the ceremonious Riesling would chill next to the beer (and quickly, at that).

As a teen, Dooley prodded his mother with wine-related questions; his fascination stemmed less from an idea that wine made you feel funny or tasted good, but because it was a way to preserve the essence of life itself. Somehow, these juicy vibrant grapes could be preserved—for years, even decades? His scientific mind hummed. 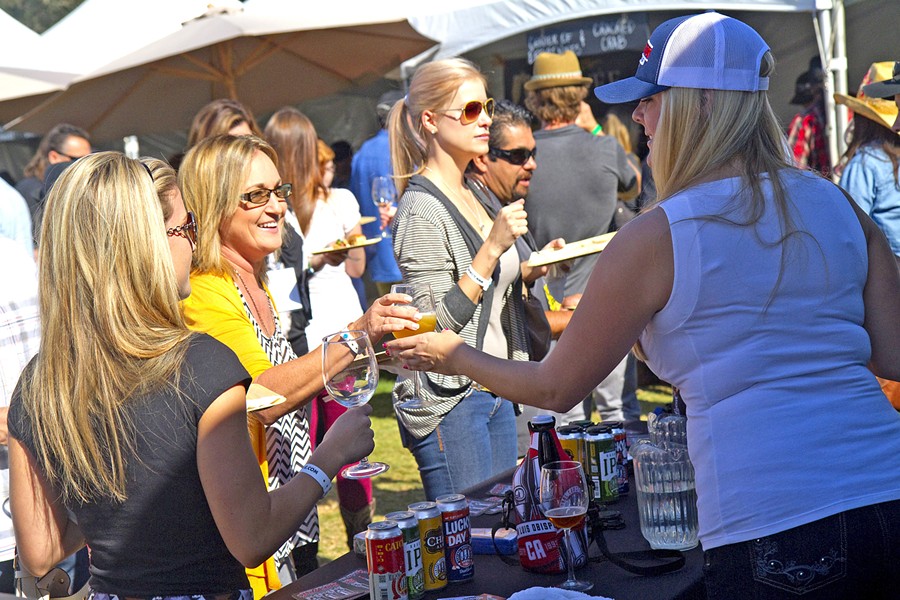 "I was like, 'Gee mom, how is wine made? What is fermentation?'" Dooley recalls during a recent phone interview. I caught up with the Stephen Ross winemaker just after his pinot noir harvest had ended, the calm after the storm. "So there I was, making apple, rhubarb, and dandelion wine in the basement in Minnesota. The bubbles in the glass jars, watching the fermentation ... I was taking a perishable product and turning it into a more stable product, which, to me, was an amazing thing."

If you're a winemaker, this is probably still an amazing thing; the thing that keeps you going when your back and feet ache from recurring punch-downs.

Dooley's still in the business of "preserving grapes," as are dozens of fellow Edna Valley area winemaker friends. Back in 1991, Dooley first hatched the idea of a harvest festival after an inspirational trip to France. Ever since, the annual harvest celebration—now known as Harvest on the Coast—has offered up a time of introspection, anticipation, and celebration for the local wine industry as a whole.

"I remember, we did the very first harvest celebration when I was at Edna Valley Vineyard. It was so small that we invited other wineries not necessarily in the association or even in the area, although they all used grapes grown in the area," Dooley says. "Now we have plenty of wineries. The growth of the organization and the industry has been incredible."

Just look toward this year's lineup and you'll see what he means. It's not just Edna Valley; wines are coming from Arroyo Grande and Pismo Beach—and it's not simply about chardonnay or pinot noir anymore.

With most of the area wineries located just 5 miles from the ocean on average, it's fitting that SLO Coast Wine Country would continue to hold its signature harvest season event right next to the Pacific.

On Nov. 3, local wineries and chefs alike will converge at Avila Beach Resort for the Harvest on the Coast grand tasting and wine auction as part of the larger weekend-long celebration.

According to Dooley, the word on the street is that this year was pretty much a "dream harvest." Those are his words, not mine.

Generally cool, predictable weather (without a ton of super hot spikes during harvest) made for an easygoing and evenly ripened harvest.

"We also had beautiful set with pollination. Nearly every flower became a grape, and the clusters were big and full," he says. "What I am hearing from other winemakers around here is there's a lot of excess fruit, and the quality is way up."

You can ask these winemakers yourself at the grand tasting, which—according to organizers—will include plenty of reasons to let loose and live a little.

Along with food and wine from more than 60 establishments comes live music by the Damon Castillo Band, and a high-energy winemaker-led auction that features rare wines, themed destination getaways, culinary treats, and more. The live auction will again feature the "Archie McLaren Fund A Need" lot where all proceeds benefit the nonprofit RISE, which serves both victims of intimate partner violence and sexual assault/abuse and their loved ones.

Meanwhile, those champing at the bit can hang at a collaborative winemaker dinner kicking off Friday, Nov. 2, at the Casitas Estate and catered by Flora and Fauna.

The fun rolls on Sunday, Nov. 4, with Surf's up Sunday, where wineries throughout the region host open house offerings brimming with hors d'oeuvres, live entertainment, and wine discounts (Heads up: This event is free to all who attend Saturday's grand tasting event).

While these kinds of events are nice, Dooley reminds us that all the winemaking—and harvest—comes down to grit and gumption. Indeed, there's more to the wine biz than sampling from barrels while the late afternoon light reflects off a perfectly poised wine thief (regardless of what you might see on social media).

"We want fruit to arrive at the winery cool, so we're out there at 2 or 3 or 4 in the morning," he says. "All these local wineries are out here with their teams, in the field, working hard. And they're doing it when everyone else is sleeping." Δ

Hayley Thomas Cain is sleeping in. She can be reached at hthomas@newtimesslo.com.