The Housing Authority of San Luis Obispo (HASLO) is tussling with property investors over ownership of the Brizzolara Apartments in an eminent domain case, but that's not the only issue it's faced while managing the 30-unit affordable complex for seniors and adults with disabilities. 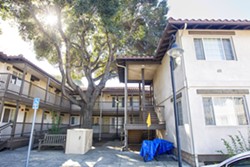 For nearly a year, between April 2017 and February 2018, HASLO failed to provide an on-site resident manager at the apartments, even though state housing regulations require a residing caretaker on properties larger than 16 units.

"A manager, janitor, housekeeper, or other responsible person shall reside upon the premises and shall have charge of every apartment," the Health and Safety Code reads.

As a result of the absence, according to two Brizzolara tenants, residents and apartment facilities, like the parking lot and laundry room, have been the targets of thefts, assaults, drug use, camping, and general abuse. Tenants alleged that private caretakers perpetrated some of the incidents as well as homeless individuals. They criticized HASLO for its lack of responsiveness to the issues.

"There are multiple problems and legalities going on here at the Brizzolara Apartments," one tenant told New Times via email. "There is no one to turn to and no one with any authority to help with tenant issues."

SLO Police Department records show that the department received 15 calls for service to the apartments since February 2017—one of which resulted in an arrest connected with an assault on Jan. 1. Other police calls included reports of theft, camping, smoking, noise, and suspicious activity.

One of the tenants who contacted New Times claimed to be the victim of the assault in the parking lot. He declined to answer further questions about the incident.

"I was assaulted right here on the property," he said. "After the fact, I learned this individual had two altercations with other tenants, which came very close to the same outcome."

According to HASLO Executive Director Scott Smith, the agency recently filled the resident manager vacancy, and he or she will start in March. Smith said on-site caretakers are "notoriously difficult to recruit for in the property management industry," and the Brizzolara Apartments' tenant income restrictions made the hire especially challenging.

In 2016, HASLO asked the state to exempt one of the apartment units from the income restrictions for a resident manager—which it did in August 2017. HASLO hired a caretaker in November, but she resigned prior to move-in, Smith said.

For the period of vacancy, Smith said HASLO staff have been on-site at the apartments regularly and are available by phone 24/7.

"The challenge has been the 'live on site' aspect," Smith said. "Fortunately [the state] has now given us a waiver." Δ