It was cold and pouring rain outside when a woman stepped up to the podium and spoke to members of San Luis Coastal Unified School District's school board March 13. Her husband stood silent behind her.

"My son is not a threat, and my son has been threatened," she told them. 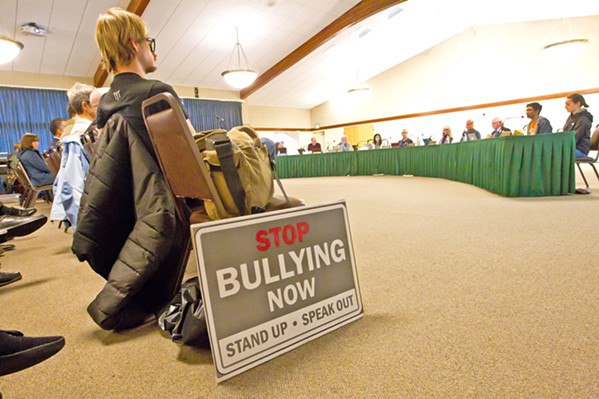 Since the beginning of the month, the woman and her family have been at the center of public discussion and concern in connection with the arrest of an unknown SLO High School student accused of bullying and threatening her son. The suspect, who police have declined to identify because he is a minor, was arrested March 1 on a felony hate crime charge.

According the SLO Police Department, the unnamed suspect had allegedly been bullying the 15-year-old autistic student since the beginning of the school year. That bullying included sending him threatening and derogatory text messages related to his autism and perceived sexual orientation. The same student also allegedly threatened to physically assault him, and police said their investigation later revealed there was a physical altercation involving the juvenile suspect and the victim in late February.

At the March 13 board meeting, the student's mother expressed frustration with the fact that the harassment and violence against her son was allowed to go on for such a long period of time, and only ended when law enforcement intervened.

"I was told he was going to be safe," she said. "But it took the student being arrested by the SLOPD. ... I don't think you guys have taken this as seriously as they have."

According to the California Healthy Kids Survey for the 2015-16 school year, 29 percent of ninth grade respondents and 28 percent of 11th grade respondents in the San Luis district reported that they'd been made fun of because of their race, religion, gender, sexual orientation, or physical or mental disability. Those numbers are just slightly higher than survey results for the same year at the county level.

The hate crime incident wasn't troubling only to the victim's family. The facts of case alarmed a number of community activists and organizations, particularly those who advocate for autism and LGBTQ-related issues.

Dr. Debra Balke is the president of the Central Coast Autism Spectrum Center board of directors. She said that while many autistic children are very capable and can be successful in the classroom, they can also be singled out for harassment.

"So many are good students, but oftentimes they are perceived as different, and they are targeted for bullying," Balke told New Times. "[The bullying of autistic students] may be even less reported than others, and I think it is more common than we understand."

Local advocates for the LGBTQ community know about the dangers of bullying all too well. Representatives for several such groups attended the school board meeting.

This isn't the first time the groups have raised concerns about the bullying of LGBTQ students at SLO High School. A March 13 letter to the school board authored by all three organizations mentioned an incident in May of last year, when one of the school's teachers penned a letter in the high school's student newspaper citing a Bible passage that appeared to indicate that LGBTQ students "deserved to die." The teacher later resigned. Heumann said that the group sent a letter to the district in June offering to help create a safer and more supportive learning environment for students, but he said the district never responded.

"We believe there is a pattern of inaction or ineffective action by the district," the March 13 letter to the school board stated.

At the meeting, school board President Chris Ungar said the district could not discuss the specifics of the case, but said he understood the public's desire to know more information about what happened.

"Providing a safe environment for students and staff continues to be a district priority," Ungar said.

At the same meeting, the board voted to approve a resolution affirming the district's commitment to maintaining safe schools. While the resolution focused on emergency planning, drills, and cooperation with law enforcement to curb school violence, the resolution also stated that the district will "continue to work with a broad spectrum of local community stakeholders" to develop and implement policies and programs to foster a school climate "free from harassment and violence."

While the district works to respond to the concerns of the community, SLOPD officials are urging citizens to report suspected hate crimes.

"We encourage people to come forward and report these incidents," SLO Police officer Josh Walsh told attendees at the board meeting. Δ