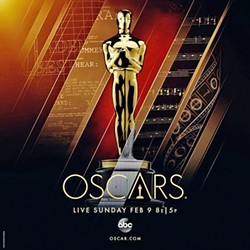 It'd been a few years since I committed myself to watching the Oscars. I can't remember exactly when the award show fell off my radar, but at some point, I just stopped caring about the whole spectacle that so often felt like the same stuffy evening of well-dressed, wealthy, and white Hollywood stars dousing praise and trophies on each other. Bummer take, sorry, I know.

But this year, a friend of mine invited me over to watch the 92nd annual extravaganza. I decided to put aside my past grievances and give the Oscars another shot.

Needless to say, by the evening's end, you could hear me chanting "BONG! BONG! BONG! BONG!" as South Korean director Bong Joon-ho and his film, Parasite, took home Best Picture—the first time that honor went to a foreign language movie.

Bong, who spoke through a translator, was incredibly gracious and funny in his acceptance speeches (he delivered four—for Best Picture, Best Original Screenplay, Best International Film, and Best Director). My favorite moment was when he thanked his fellow Best Director nominee, veteran Martin Scorsese, for inspiring him to direct movies in the first place. The entire auditorium stood up and gave both directors a long ovation. The whole scene was genuinely touching, and it felt like a seminal moment for the Academy. Is Hollywood finally emerging from its homogenous echo chamber?

Parasite's success alone would've made this Oscar "hate watch" worth it. But this year's show delivered more than just multi-culturalism. It also featured one of the more ridiculous and hilarious live musical performances of all time. Rapper Eminem performing "Lose Yourself"—an 18-year-old song from 8 Mile that, I forgot, won an Oscar—came totally out of left field, was poorly mixed, and included so many long bleeps it rendered the performance absurd. Shots of the audience during it were amazing; most looked completely confused by the curveball. I couldn't stop laughing.

And how could I leave out Joaquin Phoenix's endearingly weird and convoluted acceptance speech for Best Actor in The Joker? First of all, he looked miserable. Then he shushed the audience to stop applauding him. His ensuing three-minute speech covered so much ground: animal cruelty, the self-centeredness of humans, the importance of giving "a voice to the voiceless," cancel culture, and even his own shortcomings.

"I have been a scoundrel in my life," Phoenix melodramatically said. "But so many of you in this room have given me a second chance."

Phoenix's rambling speech felt like the yin to the yang of Bong's; it just screamed Hollywood. So we got the best of both worlds.

If all the Academy Awards shows are going to be like this from now on, count me in for next year. ∆