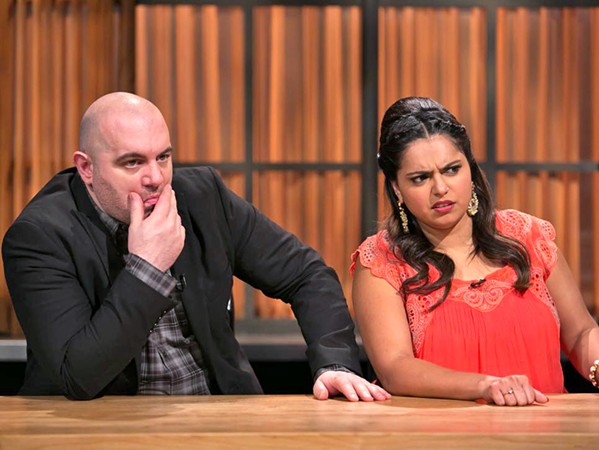 Like most people, I love to eat. But like many people, I'm broke and often forced to throw together whatever meal I possibly can with the scraps left in my fridge. Maybe that's why I love watching Chopped—it's essentially just watching upper-echelon chefs struggle to do what I do three times a day.

If you somehow haven't seen an episode of Food Network's long-running competitive cooking show, allow me to explain: Four chefs attempt to make a three-course meal—an appetizer, a main course, and dessert—with only 20 to 30 minutes per round. In each round, competitors have to use the "basket ingredients" provided, which are a mystery until just before each round begins. Three judges eliminate a chef each course, and the last chef standing takes home $10,000.

The cooking is what I actually love about Chopped, along with, of course, the cruelty.

These chefs start off so excited, with big dreams for what they'd do with thousands of dollars, and then they get slapped with mandatory basket ingredients that no one, no matter how Frenchly trained, knows how to use—dried and fermented scallops, years-old eggs preserved in clay, pig lips. Or they face baskets with mainstream ingredients that simply don't go together, like one notorious appetizer basket of durian, green Jell-O, Cheetos, and imitation crab.

There's always this wave of panic that washes over the chefs' faces when they first see the ingredients, and yet 30 minutes later they each have beautiful and wildly creative dishes to serve the judges.

But Chopped is also a reality show, which makes it fraught with things I love to hate.

Each episode starts out with a few minutes dedicated to "meeting" the competitors, a segment that is home to some of the tackiest moments in television history. This is where all the insanely awkward interviewing comes in. This is where every chef says his or her name and talks about how they love making pasta because their Italian grandmothers made pasta and it just "feels like home." It's where every chef says they want to win $10,000, so they can open their first restaurant and throw in the lowly sous chef towel, and prove to their parents that cooking is the right career path.

Inexplicably, this portion of the show is where competitors also do a lot of bragging, flexing, finger-gun pointing, and punchline saying. "If you can't stand the heat, get out of the Chopped kitchen!" Never heard that one before!

But it's not just the intro that I love hate. Chopped unabashedly uses those sound effects that are supposed to make you feel like a moment is really intense. The reality TV version of "DUN DUN DUUUUUNNN." But in this case, those sounds are paired with people dropping lettuce on the ground, or running to the ice cream machine only to find it's already being used. It's almost as if no one who competes on Chopped actually watches it, because these people are making the same mistakes, over and over again.

Basically, the show itself is kind of like the food cooked on it—a beautiful mess. Δ