Editor's note: Welcome to Hatewatch, our newest film column, where we revel in the shows and movies we just can't look away from—shows so bad they're good, flicks so awful we get that flush of self-righteousness, B-movies more guilt inducing than pleasurable. You know you hate-watch too. 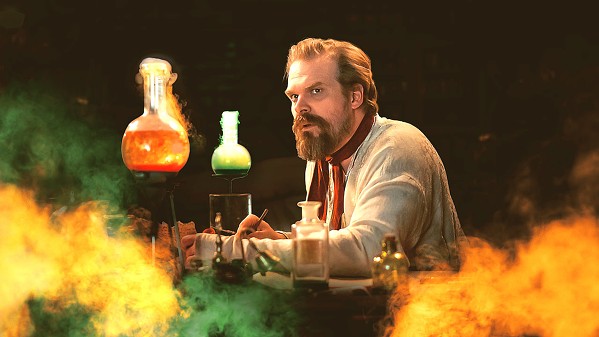 I don't feel great about the reasons I wanted to watch Netflix's new mockumentary, Frankenstein's Monster's Monster, Frankenstein. The first was the title. Seriously, as an editor, I was drawn to the punctuation. It's a technically correct messy mouthful. And second: David Harbour. My husband and I just finished season one of Stranger Things (yes, we're way behind), and I have to admit I'd never seen Harbour in anything else, so his face caught my eye.

Another reason: One of Arrested Development's writers (John Levenstein) was behind this piece. How could it not be funny? And at just longer than half an hour, my husband and I had little to lose.

With eyebrows raised, we hit play. Once it started, we couldn't look away.

I love mockumentaries—especially the Christopher Guest variety (Best in Show, A Mighty Wind) and the current Documentary Now! series. But Frankenstein is a bit of a twofer—it's half tongue-in-cheek, decent production-value mockumentary, and half super campy stage play that sends up dozens of tropes. I'm not a student of the theater, but even I was able to pick up on a bunch of in-jokes. I won't ruin any whoppers, but one character's name is a big no-no in the theater world. Chekhov's gun is definitely a thing in the play within the mockumentary. And the fourth wall? Forget about it!

Frankenstein's Monster's Monster, Frankenstein does have a bit of a plot—Harbour spoofs himself on a quest to answer questions about his fictional father and the stage career that went awry. After finding a film of his dad starring in a Frankenstein play, Harbour walks back through his father's footsteps to try to get answers. This is enough of a framework to set up the absurdity that ensues on stage, in which Harbour plays his father acting in multiple roles.

We watched Harbour with wide-eyed delight—he deadpans his way through the mockumentary parts and hams it up mightily to play his egotistical father.

This messy little gem also manages to weave in bits from The Actor's Trunk, itself a spoof of an acting craft show, which gives insight into Harbour's father's career. There are a few words from the play's sponsors, including clips of Harbour eating and drinking a la Orson Welles in one of those infamous Paul Masson wine commercials.

This Frankenstein's monster of a mockumentary was entertaining, in a "what did we just watch?" kind of way, and also in a "you have to see it for yourself" way.

But if you need another reason to watch this weird one-off, here you go: Alfred Molina. (32 mins.) Δ