From the first time I heard about Nailed It!, I wanted to love this show more than I do. What's not to love about a cooking competition that makes a point of embracing failure without (undue) shame? Unfortunately, like the icing on most of the contestants' creations, the show's a bit thin. But, also like any sugary drizzle on any confection anywhere, the seeming lack of perfection won't stop me from consuming a bit too much in one sitting. 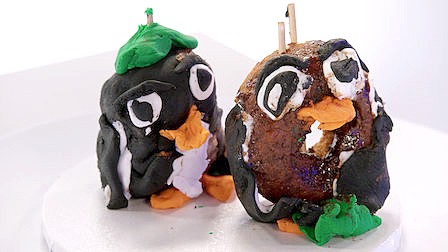 Lack of perfection is absolutely the point of Nailed It!, which is refreshing in the face of some of my favorite cooking competitions—namely The Great British Baking Show. My family and I have vainly entertained notions of attempting to bake the masterpieces shown on GBBS, but we know better by now. This is where Nailed It! succeeds—it gives me permission to ditch my inner perfectionist and just bake already. Last spring break, my girls and I, inspired after having watched too many Nailed It! episodes, tried our hands at fondant for the first time. I made a semblance of a rose, one daughter made a fairy door on our pink cake, and my other piped a purple ribbon of something flower-like around the top of the cake. Yeah, we nailed it.

The show also succeeds in being positive through and through, which makes it fun to watch with my 10- and 12-year-old daughters. The whole premise sets each show's three contestants up for failure, and everyone knows it. The judges know it, the audience knows it, and the contestants themselves know it—though in the behind-the-scenes interviews, they come off like they know what they're doing, and some are in flat-out denial about their inabilities. Hosts Nicole Byer and chef Jacques Torres, along with a guest judge each episode, do their best to not utterly freak out at the finished products, whether they're horrifying, inedible displays or nearly recognizable confections. The judges all have something constructive, if not all-out positive, to say each time.

Where Nailed It! falls off the side of "bingeable" show and into the realm of "hate watch" is that it lacks much substance. It's glitzy and funny (but it tries a bit too hard) and there are serious prizes ($10,000!) for the novice home chef with cupcake bakery dreams or whatnot. But it rings hollow, like it's not depending on much more than its schtick and the inevitable kitchen disasters to carry it through each episode.

When it comes down to it, the vibe and humor are more like buttercream made with shortening and not real butter. But that never stopped me from eating the whole thing. I just don't feel so great afterward. (three seasons, roughly 20 min. episodes) Δ