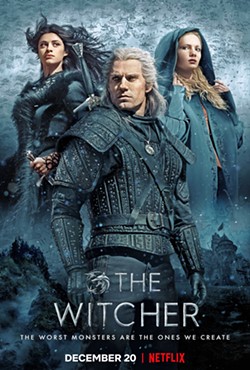 The Witcher may not be Game of Thrones, but it can learn some lessons from that show. There are some key differences: The Witcher does not have nearly as many primary characters—the hero, Geralt, played by Henry Cavill, is established from the jump. And, perhaps more significantly, the new Netflix series is not tethered to any concrete parallel to history.

The two shows are structurally completely different and draw from different inspirations. But while The Witcher uses Polish fairy tales as a wellspring of inspiration, Game of Thrones uses various historical periods the way originalism treats the Constitution. The HBO series succeeds in creating an exquisitely lived-in world by using concepts from Machiavellian political theory and pulling much of the Stark-versus-Lannister dynamic straight from the War of the Roses. These are starting points from which utterly believable characters and storylines spring forth.

That's not to say The Witcher has to feed directly from some specific historic period. The characters and story can build on whatever history author Andrzej Sapkowski decides to invent. The problem arises when that history is incomplete, and the way the show is structured leaves a ton of gaps in the timeline. One of the books the show is based on, The Last Wish, is a series of short stories that are sometimes separated by decades. Same goes for the show. That can work, but it doesn't absolve the show's creators from giving us the necessary connective tissue to help us make sense of it. Even individual scenes in the show play with time in a confusing way. Those scenes so often feel like you've heard the beginning of a conversation, missed the middle of it, then come back to hear the end. The result is not intrigue that draws the viewer in but a disoriented, vertigo-like disruption. It's hard to tell what direction it all is pointing.

Because there is so little detail about the bad guy—the Kingdom of Nilfgaard—and so much else, other strategic choices to leave out information make the show feel incomplete. Geralt, for instance, is a mutant who was sold by his mother to some guild or order. They conducted experiments on him to give him magical powers and prolonged life. It's a small amount of information that could act as a powerful draw to learn more. But because we know so little about some of the characters and so little about what happens to them in these decades-long gaps between episodes, Geralt's incomplete story feels like missing information. He's the one constant we have, and we barely know anything about him.

It makes sense that the show has been widely panned by critics. It's not a good adaptation, which doesn't mean it can't be a good show, but it has failed to get critical traction. Except, that is, from the gaming nerds. The books were first adapted into highly successful video games, and the show creators seem to have understood who their best audience would be. Gaming sites seem broadly in favor of the show, which means they may get their wish for another season and more of the same. (eight 60-minute episodes) Δ