Hats in the ring

If you’re a registered voter in the city of San Luis Obispo, then by the time you read this, there may be a ballot for the June 18 special election sitting in your mailbox.

At one point, there were plenty of candidates to choose from—seven in all—running to fill the void created when former councilman Andrew Carter resigned his post to accept an administrator position with the city of Guadalupe in Santa Barbara County. 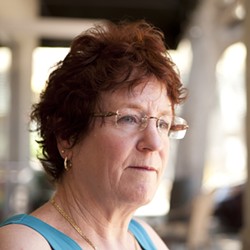 And though they won’t admit it, the public perception is that either of the two frontrunners would provide that crucial third vote on different sides when the council is split—as it regularly has been on major agenda items since Carter’s departure.

On one hand, you have Paul Brown, who sat on the council from 2004 to 2008, and, as the former owner and operator of Mother’s Tavern (now MoTav) in downtown SLO, seems to be collecting endorsements left and right from the local business community, as well as from current council members Dan Carpenter and Kathy Smith. On the other hand is former city and current county Planning Commissioner Carlyn Christianson, who appears to have solid backing from the county’s Democratic Party wing, including current Mayor Jan Marx and Councilman John Ashbaugh. 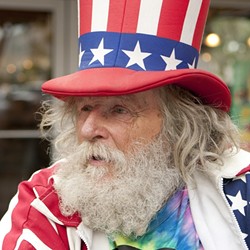 Beyond the political jockeying, however, are some very serious issues that will ultimately go before whoever ends up with their butt in the seat: the sunsetting of the Measure Y sales tax, another round of labor negotiations in 2014, getting the ball rolling on a new homeless shelter, what’s to be done with Broad Street, and continuing to encourage safety in the downtown core.

Former councilman Brown is currently a police officer with the city of Guadalupe, and told New Times he’s most concerned with fiscal responsibility and promoting an environment that’s attractive to small businesses and other potential employers by arguing to keep city fees low.

He said that his community connections remain as strong as ever, but admitted that that an embarrassing incident when two firearms were stolen from his car after he failed to secure them during his training with the Morro Bay Police Department has provided his opponents with plenty of fodder.

Christianson has served for four years as SLO County Supervisor Adam Hill’s planning commissioner, and has voted on major projects, including the Topaz Solar Farm, as well as contributing to the ultimate denial of Excelaron’s project in Huasna Valley. She described herself to New Times as a “balance between business and environmental interests,” with a strong interest in encouraging reasonably priced housing for residents.

“They’re intertwined,” she said. “Business is built on a foundation of our environment and how we take care of it.”

Regarding Measure Y, Brown said he supported it and would support its renewal even though many business owners weren’t pleased. He said he favors a sales tax that’s paid for by residents and non-residents alike, such as tourists and people who commute here for work, as opposed to increasing development and permit fees.

“They use our roads, our infrastructure. For us to pass it along to them seems to me to be the least intrusive,” Brown said. “If it sunsets, that’s up to the voters. But I think people find SLO worth investing in.”

Christianson also supports Measure Y, though she said the city’s use of a portion of that funding to pretty up two blocks of downtown sidewalk seemed “piecemeal.”

Hedrick told New Times he considers himself a “constitutionalist with libertarian leanings.” Chief among his concerns, he said, is what he called the intrusion of the United Nations’ Agenda 21 into local policy and the existence of “chemtrails.” This is Hedrick’s third run for council.

While non-binding international sustainability initiatives and government conspiracies to poison American citizens don’t exactly top the list of many residents’ spoken concerns, Hedrick does have his finger on the pulse of one hot-button issue—homelessness and treatment of the local homeless population. Of highest concern, he said, was the February 2012 crackdown on people sleeping overnight in their cars.

“The homeless treatment in this town is a knee-jerk backlash of mean-spirited liberals,” he said, adding that a new ordinance approved by the council prohibiting overnight camping that went into effect in October is no better than the original, and is “still targeting an underclass of people.”

Hedrick doesn’t support the new proposed homeless shelter on the south side of town, which he said would “cluster” such facilities in one area. He instead proposed finding a way to fill existing vacant buildings around town.

Brown and Christianson have a different take, especially on the overnight parking ordinance, having heard complaints about transient issues from the business community.

“Sometimes it’s better to take some action than to not do anything at all when something’s becoming a problem,” Brown said.

Christianson described the controversy over the crackdown and the resulting legal settlement as a “minor sidetrack to the major issue,” adding that she hopes the city can move beyond the minor squabbles and address the bigger picture of how to help the homeless find permanent residences.

If there are two things Christianson and Brown agree on, it’s that the city has done a good job investing in infrastructure, but that it could do a better job of communicating those investments to the public.

Finally, New Times asked if the candidates would play nice—maybe even fight for a compromise—with current members who didn’t support their candidacy.

“The council meetings lately have been real tough. And I just want to help,” Brown said. “But I don’t see myself as going to council to side with Dan and Kathy.”

“I have a record of being independent, hardworking, non-partisan, and bringing diverse groups of people together,” Christianson said. “And I think I disagree with Jan and John as much as I agree.”

As is expected in a tight SLO council race, the money has been coming in for the two most connected candidates. The first round of campaign disclosures—the second and last of which are due on June 6 and July 31, respectively—shows how much each candidate has taken in, as well as spent.

Christianson, during the same period, took in approximately $9,848—including a $760 loan—and spent about $8,287, leaving a $1,360 balance. Her support came from what some would call the county’s liberal establishment, including the SLO County Democratic Party, its current chair Pat Harris, Mayor Marx, county supervisors Bruce Gibson and Adam Hill, and the Planned Parenthood Action Fund of Santa Barbara, Ventura, and San Luis Obispo counties.

Hedrick reported that he neither received nor spent a dime through
May 4.

According to the city clerk, the special election is expected to cost the city roughly $100,000.

On Election Day—or June 18, the final day to submit a ballot—the city will offer polling and provide a drop-box for ballots from 7 a.m. to 8 p.m. at City Hall. The new council member is scheduled to be announced no later than July 12.