Have no fear shopping for teens 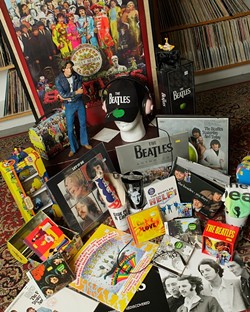 Buying a gift for a teenager can be a difficult and overwhelming task simply because teens can be very opinionated and the market is saturated with, well, tons of holiday crap. If you’ve put off gift buying for a teen, hoping for a holiday epiphany, allow us to offer a few quick ideas.

Go to the source. Most of the teenagers interviewed for this story and asked what they wanted for Christmas were fairly specific about their hopes. A few looked up at the sky and thought about the question for a few minutes, but one thing was clear: They all wanted something related to what they were currently “into.”

The key here, though, is to ask. Not every teenager is into Taylor Swift and Gap sweaters. Katie McCarthy-Cobler, owner of resale shop Retrofit, said she sells “fun, funky clothing and accessories for the goth or preppy or pretty much any style.” That should cover it.

Two concepts to stand by when you go out into the big, scary world of teenage consumerism are 1) appeal to your teenager’s interests and 2) appeal to funny bones. And no, re-gifting a Hickory Farms Sausage and Cheese set isn’t funny or ironic to a teenager. It’s just weird and awkward. Trust me. Appealing to a teen’s sense of humor can be very tricky, but here are some local shopping suggestions:

Check out SLO downtown shops like Kwirkworld and the Sock Drawer on Higuera Street. Kwirkworld sells unique, quirky iconic pop culture tchotchkes and memorabilia. The shop is filled with messenger bags and T-shirts with hilarious one-liners and television characters. The Sock Drawer is a great place to get stocking stuffers, if you’re into that, or add a pair of socks to a customized gift basket. Teenager Hector triumphantly said, “I want a sweater vest this year!” when asked about his Christmas wish. Add a pair of salmon socks to such a present for a dash of humor.

If you stick to picking out things based on an individual’s interests, you might even be able to get away with giving away a light switch faceplate. Who would object to having a shirtless Taylor Lautner on a light switch? You get the point, though.

DIY gift baskets are creative gifts for teenagers. They take a little extra work, but in the end they can be inexpensive, customizable gifts that really cater to distinct personalities. And they show you really took time to consider the teen’s viewpoint.

Matt Barkley, a young guy interviewed for this story, said, “I would like to get movies and CDs.” Create a Film Buff Basket for the student really into films. Grab a bucket, popcorn box, or basket and fill it with items like favored DVDs; used, hard-to-find cult films from Cheap Thrills Records (in SLO on Higuera). Also, include movie-theater-sized candy, microwavable popcorn, a poster of a favorite movie, and the soundtrack.

This basic idea can be used with any theme: sports, bath and beauty, music—you get the idea. There are also a ton of pre-made gift baskets you can buy. Katy at Sephora explained that gift baskets and make-up palettes are a great value since they offer a little bit of everything in sample sizes. The shop offers perfume and cologne sets and face wash sets. These gift sets may not be as fun and creative as the DIY, but they are an alternative. Most stores offer some sort of pre-packaged version of their best items.

If all else fails, give money, a gift card, or prepaid credit card. Most teens talked to for this story liked the idea of receiving money. Cash is less personal, but can also offer an opportunity for a teenager to gain some independence while learning financial restraint. According to teen Caitlin, “A prepaid gas card would be awesome!” All of her friends chimed in agreement. Students also agreed that they’d love to get books, clothes, shoes, and high-tech gadgets. Local retailers, such as Coalition, carry brands like OBEY, Moniker, and Tom’s Shoes. Cool-looking USB memory sticks and teddy bear web cams are a couple of low-budget ways to stay high tech.

Katherine, a local high school student, was clear on one point: “I am not that into Christmas this year. I think it’s more important to be into the meaning of Christmas and not the materialism of it.” Her family will be celebrating a low-key holiday this year, focusing on each other. She suggested donating to charities, such as Oxfam, which according to its website, is a group of “14 international organizations working together to find lasting solutions to poverty and injustice.” How mature!