Have your book and plate too: Local artists paint plates to raise funds for Paso Robles City Library

If you give a bookworm a book, he’s going to want a snack while he reads. And that snack might as well come on a one-of-a-kind hand-painted plate. 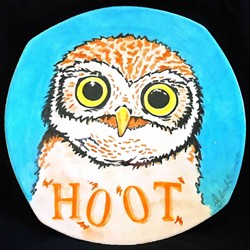 The joy of reading is free at the library, but running one isn’t. In order to raise cash for the library, the Paso Robles Library Foundation will host the fourth annual gala auction fundraiser, BookPlates! at the Paso Robles City Library on Saturday, Nov. 14, from 6 to 9 p.m.

The event features the work of more than 45 locally and nationally known artists using large ceramic plates as the canvas for their creations. While the artists may use books as inspiration for their plate paintings, they’re free to create whatever their hearts desire.

Leigh Rubin, internationally syndicated cartoonist and Nipomo resident, is participating in BookPlates! for the fourth year. Cows are a frequent subject in his comics, and accordingly in the past he has typically painted the front of a cow on his plate. But this year Rubin is switching things up.

“I thought perhaps someone might like to eat dessert off the back of a cow with an udder hanging out,” Rubin said. “If you don’t have one you’re missing out on one of life’s little pleasures, and it does help the library.”

If you miss out on Rubin’s cow butt plate, there are still many other gorgeous ones to choose from. Other plates up for grabs include an owl-adorned piece that pays homage to the book Hoot by Carl Hiaasen and another inspired by Sufi poets Rumi and Hafiz depicting a head on a cross.

“The finished plates are starting to come back from firing at Anam Cre’ Pottery Studio, and they are all beautiful!” Karen Christiansen, Paso Robles City Library manager, said. “We have many new artists this year, and some of our returning artists are taking new approaches. It looks to be a feast for the eyes for our event.”

Tickets include entrance into the gala show and auction (but only for those who are 21 and older) as well as a grazing menu created by wine country chef Jeff Wiesinger, with wine and beer by J. Lohr and Firestone Walker. The band Human Nation, which is known for their upbeat Brazilian funk, will provide entertainment and jazz tunes.

Tickets cost $40 per person and are available online at the library’s site or at the Paso Robles Library circulation desk.

Ryah Cooley is a native Paso Roblan and long time fan of the library at rcooley@newtimesslo.com.