I had to bust out my cassette player to listen to Hayley and the Crushers’ new four-song EP Gidget’s Revenge, which they released on tape! Who does that? The collection of beachy, tongue-in-cheek surf rock songs is punkish, head-banging, garage rock fun with loud guitars, thundering drums, and Hayley’s sassy brassy vocals.

Fronted by New Times’ food diva Hayley Thomas (aka Hayley “H-Bomb” Cain), the Crushers are the latest of her many musical endeavors. She’s also part of the Tarweed Two, a country duo with her husband Reid Cain, a frequent New Times illustrator and owner of Dr. Cain’s Comics and Games; and she’s lead guitarist of the punk ensemble Magazine Dirty. She’s shared sweaty stages with punk gods FLAG, Jello Biafra and the Guantanamo School of Medicine, Agent Orange, The Weirdos, and Seven Seconds, as well as modern greats Tijuana Panthers and Shannon and the Clams. 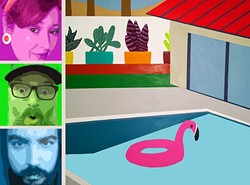 The Crushers’ EP is on local label Lost State Records and recorded by Certain Sparks Studios in Lompoc with the sort of lo-fi glory one would expect from a cassette, … or maybe my tape player’s heads need to be cleaned. It’s been a while, you know?

“We’re working on our full-length and it will be available by September 2016 in time for a West Coast tour,” Hayley promised.

In the meantime, this Saturday, July 23, Hayley and the Crushers will play a “living art pool party” in collaboration with “whackadoo artist Neal Breton of The Bunker,” Hayley said. “We’ll be covered in body paints and literally playing ‘inside’ of his amazing pool party painting-scapes.”

DJ Mano Gil will be spinning Northern Soul, ’50s and ’60s rock, French pop, and other retro sounds before and after the Crushers’ sets, and Bessy the Foto Bus will be on hand for you to capture your good side. Prizes will be awarded for the best “Beach Goth” and “Beach Bunny” costumes.

This free, all-ages event starts at 5 p.m. and runs until 8:30. Called “Summer Crush,” more details are on Facebook.

“The idea is not to do a boring, sterile art and music thing where each is separate, but to instead completely combine the two so that one blends seamlessly into the other,” Hayley said. “Like the result of great ’shrooms!”

Be there or be square!

The California Mid-State Fair is in full swing, with all the displays, animal exhibitions, carnival fun, great entertainment, and triple-digit temperatures! Well, technically it’s only supposed to get to 99 degrees this Thursday, July 21, when country star Justin Moore plays the Grandstand with Joe Nichols opening (7:30 p.m.; all ages; $26 to $46; at midstatefair.com). Heck, you should probably bring a sweater since the temp will drop to the mid-50s at night. Hear Moore’s hits like “Small Town USA,” “Backwoods,” and “How I Got To Be This Way.” Nichols is known for “Tequila Makes Her Clothes Fall Off,” “Brokenheartsville,” “The Impossible,” and “Gimme That Girl.”

It’ll be up to 101 degrees on Friday, July 22, when Fergie, formerly the Black Eyed Peas vocalist, plays the Grandstand (7:30 p.m.; all ages; $36 to $81). The eight-time Grammy Award-winning, multi-platinum artist announced that she’s been in the studio working on the follow-up to her 2006 solo album The Dutchess, which debuted at No. 2 on the Billboard Top 200 and spent 94 weeks on the chart. Expect her to play her hits and new material.

On Saturday, July 23, the hottest day of the week with a forecasted 105 degrees, country star Blake Shelton plays the Grandstand with Caroline Kole opening, but this show is currently sold out unless you want to go to one of those “resale” ticket sites. One had tickets from $141 to $245. Another had tickets from $159 to $277. Search the web and drain your bank account.

The Hollywood Vampires are Alice Cooper, Joe Perry, and Johnny Depp, and they’ll play the Grandstand on Monday, July 25 (7:30 p.m.; all ages; $36 to $81; 96 degrees). They made their worldwide television debut on the 58th Annual Grammy Awards. At the fair, expect an energetic concert and songs like their new single “Bad As I Am” from their new album, as well as renditions of popular classics including “My Generation,” “Whole Lotta Love,” and a “School’s Out”/“Another Brick in the Wall” medley.

Former member of the Eagles Don Henley plays Tuesday, July 26 (7:30 p.m.; all ages; $36 to $86; 97 degrees). He’s had success as both a solo artist and as a member of the Eagles, winning eight Grammy Awards. The Rock and Roll Hall of Famer will play hits like “Dirty Laundry,” “Heart of the Matter,” “Boys Of Summer,” “The End Of The Innocence,” and “All She Wants To Do Is Dance.”

On Wednesday, July 27, flash back to the ’80s with Duran Duran, a band so nice they named it twice, with opening act CHIC (7:30 p.m.; all ages; $41 to $116; 95 degrees). According to a recent press release, “Regrettably, keyboardist Nick Rhodes will be leaving the current Duran Duran tour … for a short period of time, to return to the UK to attend to an urgent family matter. Standing in for Nick will be long-time friend and collaborator, artist MNDR.” Expect old hits such as “Hungry Like The Wolf,” “Rio,” “Girls On Film,” “The Reflex,” “Ordinary World,” “A View To a Kill,” “Save A Prayer,” and “(Reach Up For The) Sunrise,” as well as new material.

Visit midstatefair.com for a complete listing of the fair’s concerts on its various stages. Many shows are free with your fair admission. 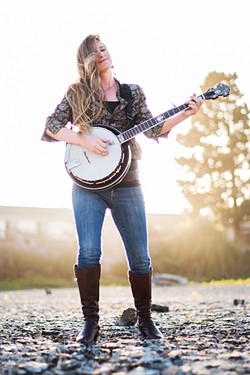 She tours frequently by bicycle, and she’s also known for her annual Banjo Babes pin-up calendar and CD, which features photos of female banjo players and a CD compilation of their material. She’s also wicked cool!

Good Medicine Presents and Tooth & Nail Winery return next Thursday, July 28, when they host an acoustic evening with Blind Melon singer Travis Warren, guitar genius Zane Carney, and special guests (6:30 p.m.; all ages; $10 presale at ticketfly.com or $12 at the door).

Warren was a member of local super group Rain for Rent until he was tapped to take over for original Blind Melon frontman Shannon Hoon, who died of a drug overdose in 1995. When the band finally decided to reform in 2006, they tapped Warren.

Carney is a terrific guitarist and singer-songwriter, known for his work with John Mayer and Broadway’s Spider-Man: Turn Off The Dark. He’s played with Stevie Wonder, Keith Urban, and Roy Hargrove, he’s appeared on Oprah, Ellen, and David Letterman.

They’ve only got brews for you

Honeyhoney comes to the Brew on Tuesday, July 26 (8:30 p.m.; 18 and older; $15 general or $30 VIP balcony). The L.A. folk duo recently released their third full-length album 3, “an album born from fascination with the sweet and the sleazy, light and dark, danger and magic,” according to their bio. “Lead singer/banjo player/violinist Suzanne Santo and vocalist/guitarist Ben Jaffe twist their gritty, harmony-driven brand of Southern-flavored rock ’n’ roll through tales of lost souls, broken boys, and girls with gold in their spit.”

Sister Sparrow & The Dirty Birds close out the week on Wednesday, July 27, (8:30 p.m.; 18 and older; $15 general or $25 VIP balcony) with a dose of their patented R&B. Born in the Catskill Mountains and coming of age in New York City, this hard soul collective will get you bouncing.

“Our music is loud, fun, and it’s supposed to make you feel good,” frontwoman Arleigh Kincheloe declared in press materials. “That’s the goal.”

KOLARS, featuring a guitarist and tap-dancing drummer, will open the show.

Alabama-based one-man-band Albert Simpson plays the Otter Rock Café this Thursday, July 21, from 7 to 10 p.m. Using a tambourine and a porchboard, which sounds like a kick drum, he plays guitar and sings, creating a deep fried Southern back porch sound.

Texas troubadour Trevor McSpadden returns to the Central Coast to fill your beers with tears and promote his new album The Only Way. He got his start in Central Texas before heading to Chicago and establishing himself in the alt-country scene. West Coast guitar-slinger Dave Gleason will join him on Friday, July 22, at Barrelhouse Brewing (5:30 p.m.; all ages; free) and Saturday, July 23, at Otter Rock Café (8:30 p.m.; all ages; free).

Wolff Vineyards Summer Music Series features singer-songwriter Ynana Rose this Friday, July 22, from 5:30 to 8:30 p.m. Enjoy some vino and Ynana’s blend of contemporary acoustic Americana music. Kenny Blackwell will join in on mandolin and guitar, and BanjerDan Mazer on banjo and dobro. Food will be available from Big Joe’s Brats.

Broadway performer Gale McNeeley and his pianist accompanist Betty Faas present “Songs Our Mothers Sang” this Saturday, July 23, in the Steynberg Gallery (8 p.m.; all ages; $10 at the door). “This is a celebration of popular music from the 1920s, ’30s, ’40s, and ’50s,” Faas said. “People will be tapping their toes to these tunes.” Added McNeeley, “We’ll involve the audience with songs that are fun to sing, like ‘Abba Dabba Honeymoon,’ ‘Makin’ Whoopee,’ ‘Side by Side,’ and ‘Goody Goody.”

The Cliffnotes return to D’Anbino Cellars this Saturday, July 23 (8:30 p.m.; 21-and-older; $10 tickets; call 227-6800 for reservations). “We’re back by popular demand,” bandleader Cliff Stepp said. “Must have been those wig hats we handed out at our last show! Put on your high-heeled sneakers and wear your wig hat on your head. If you do not have a wig hat, one will be provided by The Cliffnotes.” There’ll be plenty of great boogie and blues music by this swampified ensemble.

San Francisco-based musician and bandleader Kendra McKinley will play Frog and Peach on Sunday, July 24, in support of her new album Treat, which McKinley calls “a colorful, harmony drenched fusion of psychedelic rock and chamber pop.” She likes the “intricate vocal arrangements crafted by Brian Wilson, fractures the narrow definitions of a genre like St. Vincent, and recognizes storytelling as the key aspect of a great tune the way the best singer-songwriters have for generations.” 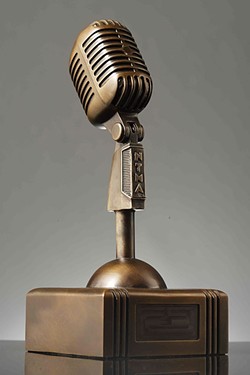 The eighth annual New Times Music Awards will begin accepting submissions to this year’s contest next Thursday, July 28, through Monday, Aug. 22. You can enter the songwriters’ contest, submit songs in the various genre categories, or submit an album for the Album of the Year contest.

Our panel of judges will decide the winners, who will be invited to play the awards show on Friday, Nov. 11, in the Fremont Theatre. You’ll find entry forms in the next four issues of New Times, or enter here online. And good luck!