Created by Vicki Jones, this HBO limited series is about Ruby Richardson (Merritt Wever) and Billy Johnson (Domhnall Gleeson), who as college lovers made a pact that if one of them texted the word "RUN," and the other responded with "RUN," they'd both drop everything they were doing and rush to NYC's Grand Central Station, from which they'd embark on a trip across the U.S. together. In episode 1, as she's taking a call from her husband, Laurence (Rich Sommer), in her car in a Ralph's parking lot in LA, Ruby gets the text from Billy, responds with the magic word, and soon books a flight from LAX into New York, meeting Billy at the station where they board a train bound for Chicago. (Seven approximately 30 min. episodes). 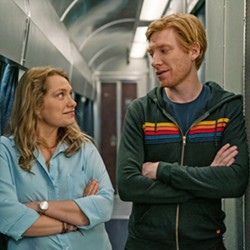 Glen Only the first five episodes have been released in this limited series, with the final two episodes coming in the next couple of weeks—so where it will end up, I do not know, but so far it's a very quirky story about two 30-somethings leaping headlong into a shared midlife crisis. It's certainly a promising premise. Ruby and Billy haven't seen each other in almost two decades, and I get the feeling that they're infatuated with idealized versions of each other that probably never existed. What's clear is Ruby's life isn't filled with the excitement she'd hoped for, and she obviously remembers her relationship with Billy as passionate and even a little bit dangerous—everything that's missing from her average life. Billy is a little bit more of a mystery. He's some sort of motivational speaker/lifestyle guru, and in a later episode (it's not a spoiler ... they show a bag of cash in the series trailers), he withdraws a large sum of money that he's trying to protect from his personal assistant, Fiona (Archie Panjabi), who somehow feels Billy owes her. Billing itself as a black comedy mystery, I must admit it's so far very good at keeping me mystified. I have no idea where this is going, but it's a fun ride so far.

Anna With episodes only running 30 minutes, they pack a lot of punch into a short glimpse of this haphazard adventure. Ruby feels saddled with her day-to-day life with Laurence and their two boys and wistful for the life she could have had but didn't. Billy is definitely the mysterious one in the pair—why he is running and from whom still isn't quite clear to me even after five episodes. The complications that come with dropping your life and running away are inevitable and come to the pair quickly. Ruby's lie of attending a yoga retreat unravels fast, and Laurence has little patience for her tomfoolery. Fiona is a vindictive stalker who will pretty much do anything to get her hands on Billy's cash. It's a quick-pulsed adventure, and the leads are clearly having a good time playing off one another. I can hardly believe they'll be able to wrap it all up in two more episodes, but I'm looking forward to seeing if and how they pull it off.

Glen Episode 5 definitely upped the ante. The first few episodes are slow in comparison. Maybe one of the reasons I'm finding the show so bracing is because of nostalgia for close-quarter travel, spontaneity, and the freedom to just get up and go! The reality of Run is so foreign to our new normal of sheltering in place. Gleeson and Wever are both great in these roles. There's something slick and shallow about Billy and something broken about Ruby. They both have secrets and regrets, and as this adventure plays out, they'll both have ramifications to deal with. How can Ruby, who seems like a genuinely sweet person, leave her family on a lark? I wasn't entirely sold on this show after the first episode, but I'm glad I stuck with it. I'm all in now and look forward to seeing how Vicki Jones, who previously was a script editor on the hilarious series Fleabag, manages to tie all of these strings together.

Anna The frenetic energy of the show can be pretty inconsistent, but this latest episode really hooked me. It seems like such a crazy thing for Ruby to leave her family that she seemingly loves and is worried about—but we soon realize that she feels like life has simply passed her by. She never became the big-time architect she dreamed of, and she married the safe guy and had his kids. She's wistful for her lost youth and all the freedom that Billy represents. It's pretty clear from the start that Billy himself is even more of a mess, though a much more believable candidate to flee from his life. The two work well together, and while it feels a bit like watching a train wreck, it's also fun to watch the chaos around these two. I can't wait to see how they wrap this series up. Δ