He just wants some slack

Jerry Miszewski is hardly public enemy No. 1, yet the Cal Poly math major--sweet faced and courteous as a Boy Scout--has been kicked out of nearly every park in the San Luis Obispo area. He's even been busted in his own backyard for practicing what he describes as a sort of moving meditation: slacklining.

In recent years, the sport has evolved from the culture of rock 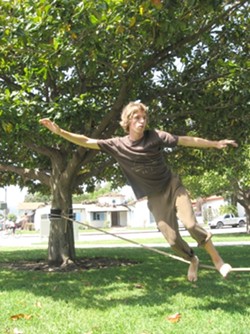 # climbing. Its practitioners use

climbing equipment--pulleys, carabineers, ropes, and the like--usually strung up between two trees. It's a lot like tightrope walking, but instead of a taut cable to walk on, slackliners totter and balance on a more relaxed rope. It requires a great deal of concentration.

"It's really my form of meditation," Miszewski said, "because you can't think of anything else when you're on it, or you'll come off."

It seems harmless enough, but Parks and Recreation Director Betsy Kiser said that the activity violates a city ordinance against tying ropes to trees, which is meant to protect the city's greenery. The city is considering a revision to the master plan, she said, but the process is long. Until then, Kiser said that she's created an interim policy banning slacklining.

There's also a question of liability should someone fall and get hurt. The line is set up about three feet off the ground, over grass, but Kiser said that the city's insurance provider advised against the activity unless there's a designated slacklining area.

Keith Pellemeier, the city's parks maintenance supervisor in charge of the urban forest, said that there are several ways slacklining could hurt trees, but if the line is set up properly, it could be done at no cost to the plant.

Miszewski uses a piece of thick canvas to keep the rope from damaging the bark--and he questions the liability issue. At a recent Parks and Recreation Commission meeting where he requested that slacklining be put on the agenda, Miszewski suggested that a jungle gym, such as the one at Mitchell Park, or the skate park at Santa Rosa Park, poses a greater risk.

Miszewski said he's been given the boot at both of those parks, as well as Meadow Park, French Park, and Pismo Beach. Slacklining was set for discussion at the Parks and Recreation Commission's May 7 meeting, but the item has been bumped till June. Kiser said that the commission has been swamped, dealing with the Mitchell Park paving issue as well as issues with the skate park.

In the meantime, Miszewski continues to set up his line in new parks, hoping the city doesn't bring him down again. ?