Get in on some defense 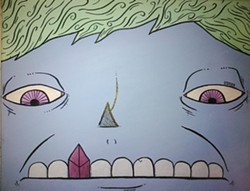 This is not a news story. It’s not an objective investigation that sets out to interview all the participants and find the truth. No, this is one dude’s version of what happened one night 18 months ago, a night that’s now culminated in a felony charge of assault with a deadly weapon, a pending court date, and the inevitable threat of potential civil litigation due to hospital bills and pain and suffering.

Rowen Sidaris-Green, 31, gives a Reader’s Digest condensed version of events that starts with a casual date and ends with a physical dust-up between Rowen and his date’s ex. He admits he should have called the cops when the situation started to get hairy, but … .

Rowen, who’s 6-foot-1 and weighs 155 pounds, ultimately “got the better of” the other guy, who he describes as “about the same size.” Rowen’s story ends with the two guys going their separate ways essentially amicably, only for police to get involved after injuries were later explored.

Underground art movement to the rescue!

San Luis Art Supply’s Neal Breton gathers up some street artists (read taggers and criminals!) like Soak, Gwap, and Sidewox, as well as some purveyors of less illegal artwork like Jeff Claassen, Stenzskull, and Gary Ellsworth, and gets them to join forces for “Defense Budget,” a show to raise money to help Rowen defend himself against the felony charge of assault with a deadly weapon—even though, as Rowen describes it, it sounds like just a fistfight between two skinny dudes, who after it was over made peace and walked away like men.

First of all, Rowen is no saint and had been arrested before, once for fighting, but as he sees it, the cops are blowing this situation up into more than it is. 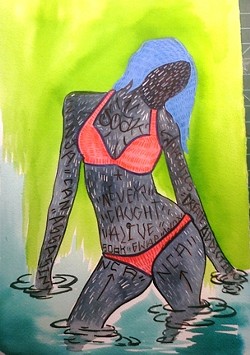 “Everyone who I’ve told the story to says, ‘You did the right thing,’” adds Rowen, who’ll have a couple of his own pieces in the show. “I can’t say enough good things about Neal Breton, and a lot of these other artists are guys I’ve known for 10, 12 years. They think it’s bullshit that I’m in trouble with the police.”

Neal, who turned me onto the event, thinks so, too.

“He’s a good guy overall, [but] the police don’t think so,” Neal e-mailed me last week. “They have their suspicions about him. He’s a bit of a tagger, and they’ve never caught him, so he’s got that mantra going for him. Anyway, this show is to raise funds for his defense lawyer.”

Sympathies for Rowen abound. Neal describes the background of the fundraiser as a fight Rowen didn’t start, and drops words like “self defense” when talking about the chain that runs from the fight to the hospital to the police.

“Blah blah blah, interesting story over,” he sums up. “But there might even be a quirky, snarky story related to the not-so-underground art scene here that no one seems to care about.”