Those who couldn't find a seat lined the walls and eventually spilled out into the lobby of the San Luis Obispo County Government Center on April 11. 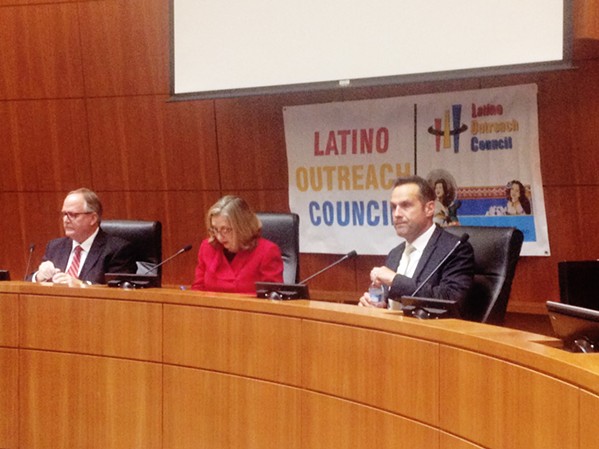 They were there to see the first debate in the race for SLO County sheriff, pitting incumbent Ian Parkinson against his challenger, former police officer and current private investigator Greg Clayton.

The race has revolved around the death of SLO County Jail inmate Andrew Holland, a schizophrenic man who died of an embolism in January 2017 after being strapped in a restraint chair for 46 hours. Disturbing footage of Holland's death released last month galvanized supporters on both sides.

"I know that there are some very volatile issues involved in regard to this particular race," said Jacqueline Frederick, president of the SLO County Latino Outreach Council, which hosted the debate.

Clayton, who has made the Holland case the centerpiece for his campaign, dove right into the issue during his opening remarks.

"The torture of Andrew Holland was completely avoidable, and the resulting cover-up by the sheriff is an insult to this county," he said. "It's time for new leadership. It's time to restore the public confidence in our sheriff."

Parkinson touted his record and experience, telling the audience that he has been implementing a number of reforms at the jail rolled out in the wake of Holland's death.

"He was a line-level police officer," Parkinson said. "He did not have any supervision or management experience."

Clayton used his rebuttal to again remind the audience about Holland's death.

"What kind of management and judgment was there when that occurred," he said.

The questions, which were submitted by members of the audience, touched on more than Holland's death and included topics such as opiate use and abuse, school safety, gang activity, and human trafficking.

Both candidates also weighed in on whether they'd support a citizen oversight committee. Clayton said he strongly supported creating such a committee, and Parkinson said he'd be open to it.

"I would say that I would not be opposed, but we have to be careful," Parkinson said. "We have to have an educated group to understand the complexities of both the Bill of Rights for police officers and also to respect the privacy of individuals who are protected by law. ... Having something like that I would not be afraid of."

Both candidates said they had serious concerns about Senate Bill 54, the so-called "sanctuary state" bill. Parkinson said the law hampered the department's ability to communicate with federal partners and made it hard for the federal government to take dangerous criminals out of local jails.

"Our inability to relinquish these individuals to custody of ICE causes them to be returned to the communities which they prey upon," he said.

"Your elected sheriff must be held accountable," he said.

Parkinson again promised that he had the experience to carry out the necessary reforms.

"We have made a directional change. ... I'm not finished. I can make this change. I've proven that I was successful before, and I'll prove it again."

Voters will head to the polls to pick SLO County's next sheriff on June 5. Δ