Just when you thought it was safe to let your children out of the house again, along come Altercation, Wintersfear, Facinorous, and The More the Merrier to play an all-ages, quadruple-header, metal-tastic double album release party extravaganza at SLO Brew on Thursday, March 29 (8 p.m.; $10 presale or $12 at the door).

Sadly, I don’t really “get” metal anymore. Today’s metal bands bear little resemblance to the metal of my youth—acts such as Deep Purple and Black Sabbath, or even Judas Priest or Motörhead, or Mötley Crüe, Poison, Metallica, Megadeth, Slayer, or Anthrax, for that matter. I’ve got to face it: I’m probably too old and not angsty enough for metal. And now there’s death metal, black metal, metalcore, nu metal, thrash metal, wide-eyed kitten metal … okay, I made that last one up, but there’s a lot of subgenres! Basically, when it comes to metal, I don’t know what the hell I’m talking about!

Since I’ve never seen the local metal bands who’ll be performing on Thursday, March 29, I can only tell you what they tell me:

“Altercation started out with original members—Ralph Lee, Will Ottone, and Joey Atiya—when all three were still in high school. Altercation changed lineups several times until late 2009 when they linked up with drummer Kori Harvey and his brother (synthesizer) Joe Yopp. Since then the group has materialized into an unstoppable shockwave of brutal, dark, technical metal echoed throughout California’s Central Coast. Known among their hometown fans for their unique and exceptionally heavy brand of primal metal coupled with unmatched performance energy and attitude, Altercation is on a mission: Kick the world’s ass with the heaviest music known to man.”

As for Wintersfear, they were 2010’s runner-up for 107.3FM’s Battle of the Bands and winners in 2011: “Mixing new American metal with the classic Scandinavian melodic death metal sound, Wintersfear is bringing a new sound to a growing genre. Tight guitars that weave in themselves beautifully, drums that leave you scratching your head in awe, and vocals that pierce into your heart via your ears, this band is not fucking around! Started in 2009 and growing rapidly, they are ready to take on the Central Coast and the world.”

Both Altercation and Wintersfear will be releasing new albums, which I hear will be handed out free to all ticket holders. Facinorous and The More the Merrier will open the show, and since we’re on the subject, metal fans should also know that on Friday, March 30, Facinorous, At Dusk, and All You Can Hate play Camozzis (21 and older; $5, 9 p.m.) It’s All You Can Hates’ first performance and a tour send-off party for Facinorous and At Dusk.

And while we’re on the subject of SLO Brew and Friday, the club also has Henry Rollins coming on Friday, March 30, though the show is already sold-out. On Sunday, April 1, however, you can still get tickets for Mike Pinto (7 p.m.; all ages; $8 presale or $10 at the door). The singer-songwriter blends reggae, ska, surf, and Latin rhythms.

Descendants of Prospectors headlines the Thursday, March 29, Songwriters at Play showcase at The Porch (6:30 p.m.; all ages; pass the hat). Featuring eclectic, experimental songwriting by Kiel Williams and Rick Moore, graduates of the prestigious Berklee College of Music in Boston, the group is now a trio delivering vocal harmonies, complex melodies, and innovative rhythms.

Finally, on Tuesday, April 3, at Kreuzberg, The Hereafter’s John Elliot returns (6:30 p.m.; all ages; pass the hat). The Los Angeles-based singer-songwriter has played pretty much every L.A. venue there is, including regular shows at Hotel Café, and his music has appeared in such television series as Grey’s Anatomy, One Tree Hill, and Californication.

D’anbino is blowing up! The Paso tasting room used to do a show here and there, but look at this week! They kick things off with the Royal Garden Swing Orchestra on Friday, March 30, from 8 to 10 p.m. This phat nine-piece band can play more than 200 special arrangements of memorable tunes from the swing era to modern classics. Admission is $10 ($5 for Record Club members).

Later that same day, Code Blues plays from 8 to 10 p.m. This versatile blues act works comfortably in a variety of styles. They’re the cure for what ails you. Admission is $10 ($5 for Record Club members).

Then on Sunday, April 1, D’anbino opens its doors to the Famous Jazz Artist Series when Kye Palmer plays two shows: from 4 to 6:15 p.m. and from 7:15 to 8:30 p.m. This top-tier West Coast trumpeter works regularly as a Los Angeles studio musician and was a member of the Tonight Show Orchestra. Call 927-0567 or rsvp@talsanmusic.com for reservations ($15, or see both shows for $20).

Then, on Monday, April 2, come for the Cuesta Night Band from 7 to 10 p.m. The jazz act has appeared with world-class jazz musicians, including trombonists Andy Martin and Rob McConnell, trumpeter Bobby Shew, saxophonists Ernie Watts and Tom Scott, and local favorite vocalist Inga Swearingen. The band has also been invited to play at the annual conference of the International Association for Jazz Educators in New York City. This show is free.

The inaugural Rock ‘n’ Flow SLO Music Festival is coming to Santa Rosa Park on Saturday, March 31, from noon to 6 p.m. The fundraiser for the SLO Skate Park (all ages; $10) features six hours of live music, a raffle, an art show, a best skate trick competition (sponsored by Coalition, from 2 to 4 p.m.), barbecue by G-Brothers Smokehouse, and a Central Coast Brew garden in the works.

“It’s called Rock ‘n’ Flow because of all the different types of musical genres coming together to build a stronger platform for their music, and to network with each other and their fans,” said organizer Jake Miller. “We as a collective want to provide a fun and inspiring atmosphere for people to come be a part of, and to promote creative expression in art, music, and sports.”

Out of this world

The first track, “Sequoia Gigantis,” on Sara Serpa’s new CD Mobile, begins softly with Serpa almost whispering the words lifted from a John Steinbeck passage in Travels with Charley, and so begins an esoteric jazz excursion with a woman whose voice can only be described as otherworldly. Think Bobby McFerrin meets Kate Bush.

Next comes “Ulysses’s Costume,” inspired by Homer’s The Odyssey, then “Pilgrimage to Armanath” from V.S. Naipaul’s An Area of Darkness, then “Ahab’s Lament” from Herman Melville’s Moby Dick, then “If” by e.e. cummings’ Tulips & Chimneys, and so it goes. Each of the 10 tracks on her new album finds inspiration in classical literature.

In most cases, Serpa sings not words but tones, her voice acting as an abstract instrument. In other cases, the Lisbon-born vocalist presents a sung poem, such as cummings’ “If.” It’s arresting material and Serpa is an unusual talent who takes her compositions into outside jazz territory. It’s beautiful but somewhat challenging material.

See Sara Serpa on Thursday, April 5, at Steynberg Gallery at 7:30 p.m., when she performs as a duo accompanied by guitarist Andre Matos, who appears on her album. Presale tickets are $10. Call 547-0278.

On Thursday, March 29, head to Frog and Peach to see Incomplete Neighbor, a San Diego-based trio. “We’re going to be releasing a five-song EPK online for free on March 15th called Flowers and Dinosaurs,” said singer-guitarist Tyson Zamora, “after which we will be touring north to Oregon.” They have a sort of psychedelic sound, and fond memories of SLO Town. “We wouldn’t miss the opportunity to play SLO as we once had an amazing night there after playing Linnaea’s Café about three years ago in what was then our first out-of-town gig as a band (we stayed with the party clowns that night if that clues you in).” 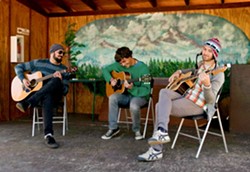 Hear French music and jazz during the Cal Poly Music Department’s faculty chamber recital at 7:30 p.m. Friday, March 30, in Room 218 of the Davidson Music Center on campus. The first half of the program will feature French music. “It’s a great way to appreciate some of the diversity within one national tradition,” said music faculty member David Arrivée, who helped coordinate the recital. The program will conclude with a jazz set by Paul Rinzler on piano, David Becker on saxophone, Ken Hustad on bass, and a to-be-named drummer (Ross Sears was supposed to perform, but sadly passed away recently. He’ll be missed by the music community). They’ll play a mix of classic and contemporary jazz. Admission is $5 at the door.

Phoenix-based band The Wiley One mixes it up with breezy folk, soulful reggae, and saucy hip-hop on their new album Kill It With Love. If you like G Love, these guys may be up your alley. The group’s been on a coast-to-coast tour, but they’re landing in Frog and Peach on Friday, March 30, at 10 p.m. “Life is all about perception and you can always kill it all with love and move forward,” said front man Sam Wiley. “We’re always thinking big, but at the same time we feel blessed and humbled at the possibility of creating and performing music full-time for a living.” Full Blown Stone opens the show.

Youthful, awesome, infectious Gypsy jazz act Red Skunk will once again host its (infamous) Viper Party on Saturday, March 31, from 7 to 10 p.m. in the Pavilion on the Lake in Atascadero. This ’20s-themed party encourages attendees to break out the flapper attire. Go big, because there are prizes and VIP seats for the best-dressed individuals and couples! You’ll also witness the world premiere of the band’s new video for “The Vamp of New Orleans.” Enjoy swing dancing, surprise guests, and more! Buy tickets online at redskunkband.com. 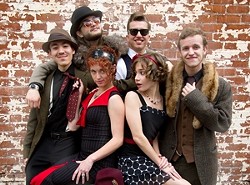 Tyler Matthew Smith’s bio starts like this: “What sings like Van Morrison, talks like Van Jones, and lives in a van? Meet Tyler Matthew Smith, former legislative aide to the New York City Council, horn player turned troubadour, and current San Francisco resident … sort of.” The “sort of” refers to his “livin’ in my van” lifestyle. When he plays here, tell him not to park on Prado Road, eh? Anyway, Smith plays the Frog and Peach on Saturday, March 31, at 10 p.m. He’s touring in support of his newest CD, Hamdulillah.

Sukha Wellness Center of Avila Beach will be host to Girish, a kirtan chant singer, on Sunday, April 1 at 6 p.m., for a sacred music concert. Girish is an accomplished musician of many genres and former monk who links lyrics and rhythm in a spiritual musical event. Girish and his eclectic band will create an ecstatic event that features songs, hymns, and chants from his CDs, Girish Remixed and Diamonds in the Sun, along with some old favorites. He sings traditional Sanskrit mantras with “a modern, funky, yet deeply devotional twist.” Tickets cost $15 presale (801-8088) or $20 at the door. Buy tickets at Treetop Yoga in Santa Maria, Village Yoga in Arroyo Grande, Yoga Shala in Shell Beach, mBody in San Luis Obispo, and Serenity Yoga Center and Spa in Templeton.