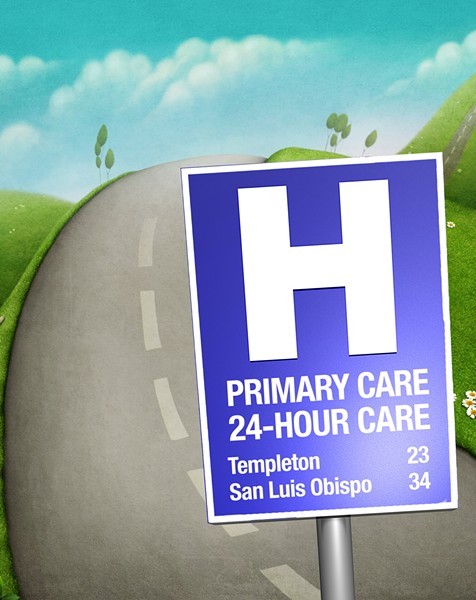 Forty percent of Cambria's roughly 6,000 residents are 65 or older. Health care access in the remote coastal town includes an ambulance service, a clinic, a specialist, a medical lab, and a concierge physician.

To fill the gap of primary care services, in 2016 the Cambria Community Health District researched how it could effectively serve Cambria's medical needs, with district board member Barbara Bronson-Gray spearheading the effort.

She told New Times that the district, nurses, and physicians in the community decided to conduct a survey to understand the area's medical needs. The results led the district to reach out to the Central Coast's major medical providers to bring primary medical services to Cambria.

"She got more than 800 patients, and people were very happy and it was all very good," Bronson-Gray said. "We were then notified that she was going to be transferred to Paso Robles because they had a larger outpatient clinic there that didn't have a [doctor of medicine] and was growing."

It left many patients, including Nancy McLaughlin without a local primary care physician. McLaughlin told New Times she had been Lewis' patient since she started taking patients in Cambria. McLaughlin was thrilled to have a female physician and felt that Lewis always did a thorough job.

When Lewis was transferred, McLaughlin said she had to see a nurse practitioner at First California Physician Partners. To meet her other medical needs, she drives 34 miles to the city of San Luis Obispo.

"It's pretty much a whole day. Of course, I try to do other things while I'm there, but that's the way it's always been," she said.

McLaughlin didn't see a doctor very often until last year, when she began experiencing some medical issues. Now she frequently visits the doctor, but having to constantly make the 40-minute drive to SLO can be an inconvenience, she said.

Concerned residents such as McLaughlin, who benefitted from the direct medical service, approached the health district, board member Cecilia Montalvo said, and the district decided to issue another medical needs survey.

Conducted in July, the survey included 23 percent of area households—975 residences—that responded by mail or online via the district's website.

According to survey results, 88 percent of respondents expressed their desire for more local primary health care services, including having a local physician in Cambria.

An overwhelming majority of respondents, 91 percent, reported that they currently have a primary care provider, but only 38 percent receive their care locally. About two-thirds of respondents would or most likely would seek their primary health care from a newly recruited physician.

Only 39 percent said they had visited an urgent care clinic within the last year, however 64 percent indicated that the district needs after-hours or weekend local health care services such as urgent care. The survey found that 80 percent of respondents had up to five primary care visits over the past year. Respondents had a variety of insurance coverage plans, but about 73 percent say they have Medicare coverage.

The community does have medical services, but Montalvo said through the survey results and multiple discussions with community members, the district is understanding that residents want more choices.

She said the district isn't solely thinking about filling primary care gaps, but mental health services or COVID-19 testing capabilities as well—at the moment, there isn't a COVID-19 testing site in Cambria.

"We would have been able to arrange that through partnerships in the past, but I think we're hearing a desire from the community for the district to get more emphatically involved in making sure that the breadth of service, whatever breadth of service we can have, we get," Montalvo said.

Currently the district is exploring tax measures, what services it could provide the community directly, and what services can be provided through partnerships as well.

Providing direct services—licensing a clinic, recruiting a doctor and staff, or partnering with an existing medical provider—comes at a price.

The survey did ask whether respondents would be in favor of a parcel tax to support more medical services in the community, however Bronson-Gray said the district couldn't give respondents a specific price point. Nevertheless, 70 percent answered favorably.

The ambulance service, educational workshops, and outreach is funded by an existing parcel tax and a portion of SLO County's general tax revenue.

A new parcel tax for the district was placed on the ballot two years ago, but it failed. Bronson-Gray said, in her opinion, the measure failed because it didn't specifically state what the funds would go toward. Instead, the measure listed the district's needs.

In the next six months to a year, the district is hoping to have options for the community to evaluate, whether it's a partnership, direct services, or a hybrid. The nearest health care districts to Cambria are in the Salinas Valley, Lompoc, and Camarillo. Δ