“What happens when you combine a ceramic artist sculpting the mathematical principles of the Pythagorean theorem and fractals with a painter and sculptor whose work is rooted in synesthesia, a neuropsychological experience in which sounds are seen and words and aromas have color?” asks curator Ruta Saliklis in her statement at the entrance to SLOMA’s Gray Wing. The answer is Synergy, an exhibit juxtaposing the work of ceramicist Jarred Pfeiffer and Menthe Wells, a synesthetic artist who works across media.

In her artist talk on May 16, the exhibit’s opening day, Menthe Wells discusses the experience of synesthesia, which she describes as a “stimulus causing multisensory responses.” Wells identifies three additional senses beyond the famous five—the vestibular sense, the visceral sense, and the cutaneous sense.

“What color is the sound of a trumpet?” asks Wells, to demonstrate synesthesia in action. A few colors are offered from the audience attending the talk—orange, yellow—before we learn that, apparently, the most common answer is red. This fluid conversion of one sense into another is reflected in all of Wells’ work in some way—little translations of basic artistic language that make traveling throughout the exhibit exponentially easier and more satisfying, like the use of a pocket phrasebook.

“You’ll see in my exhibit component pieces,” Wells explains. “You’ll see multiples. They can be moved and changed and the shapes moved.” This alluring, polysyndetic peek into the artist’s interpretation of her own work adds another level of appreciation onto the visual. The shadows cast, the ambient sounds played, the forms repeated in a single piece and across several pieces—these are not incidental occurrences but essential elements of the exhibit.

Wells, who tells me she only works outdoors, draws a great deal of her inspiration from the natural world, though the result is anything but plein air. Her sculptures Spring Marquis (which, she clarifies, is actually pink, even if it may not appear so at first glance) and Spring Nature I embrace nature’s most productive season, while her brush-painted series Bird Hanging I-V has made its own synesthetic transformation into an equivalent series of sculptures. The birds “actually flew off the hangings,” Wells says.

Wells flouts the feminine convention of the “reclining nude” with her Reclining Dude, a steel figure who, Wells assures me, is nonetheless quite fragile to move. A natural exhibitionist, this dude has no trouble luxuriating in the middle of the gallery floor. The welded steel arms of the nearby Circular Embrace reach out as if to grasp him. 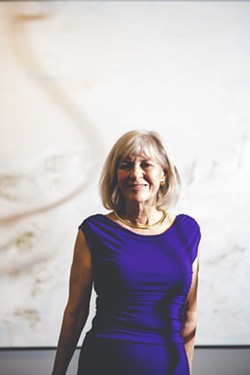 Jarred Pfeiffer, a ceramics instructor at Cuesta College, was unable to attend the May 16 artist talk, but his presence in the gallery alongside Wells’ work is far from diminutive. The mirror-image minimalist installations Toridal Square and Torus, reflective of their eponymous mathematical principle, continue the use of reflection and placement identified by Wells. Their repeating circles create a grid of both object and shadow—a forest of perfect ceramic rounds. They are explicitly mathematical in their exactitude, even without any knowledge of the exhibit’s theme, but they refuse to be bound by any one theory; they evoke everything from the Sol Lewittian cube structures to breakfast cereal.

The honeycombs of Cluster, in shades of fresh, summery blue ranging from the shallow to the deep end of the pool, climb the gallery’s central wall. Their shape and repetition recall the organic calculus of nature and, if I’m being honest here, ever-so-slightly resemble cereal as well. Then again, I’ve always been better at cereal than I am at math, so perhaps Pfeiffer’s multifaceted pieces are simply reflecting my own inner life back to me—an inner life in which breakfast is still the most important meal of the day.

In addition to these wall installations, Pfeiffer contributed a series of stoneware platters hung in groups throughout the show. While each piece could have stood on its own, they are far more striking in tandem. This throng of earth-toned glazes serves as a welcome contrast to Wells’ many metallic surfaces. The centerpiece of the largest group of platters is Ascension, a brown and tan abstract landscape in soda fired stoneware evocative of the studio pottery revolution of the 1960s and ’70s. The visual cleverness of Twin Planets also stands out from the crowd.

In contrast, Pfeiffer’s The 2.5 Dimension is so light and confectionary that I had to lean in close to be sure it was truly a ceramic. The illumination barely escaping from underneath the porcelain slip gives the piece a phantasmic quality—the ghost of Marie Antoinette come back as a meringue.

You don’t need to be a synesthete or a mathematician to appreciate Synergy, all you need is the inherent logic and associative instincts with which we are all imbued. So stop in to SLOMA and catch this exhibit, before the days of the week lose their flavors and the sounds return to monochrome.