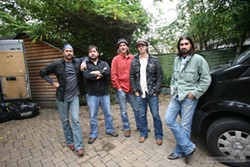 Talk about a massive year! Band of Heathens appeared on PBS’ Austin City Limits on a bill with Elvis Costello. They topped the Americana charts for the second time in as many albums. They appeared on NPR’s Mountain Stage. And they played several major festivals: Lollapalooza, Austin City Limits, SXSW, and Wakarusa. Still, they managed to squeeze in some studio time to record another great album, Top Hat Crown & The Clapmaster’s Son, which climbed to No. 9 on the MTV Music Meter and currently resides at No. 18. The Austin-based act will appeal to fans of acts like Townes Van Zandt, James McMurtry, and The Jayhawks, among others. See them at SLO Brew on Friday, April 8 (7:30 p.m.; 18-and-older; $10 presale or $12 at the door). The JD Project will open the show.

SLO Brew also has surf rock and reggae act B Foundation playing Thursday, April 7 (7:30 p.m.; all ages; $8 presale or $10 at the door). If you’re a fan of teen angst and the salty waves of the Pacific Ocean, you will likey!

Punk rock juggernauts Strung Out return on Saturday, April 9 (7 p.m.; all ages; $15 presale or $16 at the door), with Fighting Chance opening. Now enjoying their 20-year anniversary, Strung Out recently released their seventh full-length CD, Agents of the Underground. 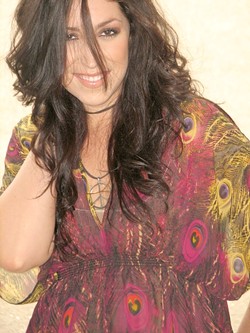 When Atascadero resident and Templeton native Amy Estrada decided to record an EP of her brassy, countrified songs, she went to a place that clearly understood her goals: Sound Emporium Studios in Nashville. The five songs—four of which were penned or co-penned by Amy with help from Claudia Estrada, Derrick Kuppens, and Rex Hayes—feature a tight, professional backing band and really showcase Amy’s rich, powerful voice.

Hers is something of a Cinderella story. She won plenty of local and county vocal prizes, and then she went for the big time, the “Colgate Country Showdown,” where she was narrowly dethroned at age 16 by an all-guy band that ended up winning that year’s contest. Still, she never gave up her dream, putting her music out to the masses on Myspace, where she drew the attention of Nashville producer Will Smith, who managed to capture her natural charisma.

Catch her act at Hearthstone Winery on Friday, April 8, from 4 to 7 p.m. Mark your calendar for Sunday, April 17, when the now 23-year-old plays Mozzi’s Saloon in Cambria from 5 to 8 p.m.

“Currently all of my shows are acoustic, featuring a collection of my originals as well as a vast catalog of popular country and pop covers,” said Amy, who’s a rising star to be sure.

Sabrina & Craig play The Porch on Thursday, April 7 (6:30 p.m.; all ages; pass-the-hat), as part of Steve Key’s Songwriters at Play showcases, which always feature a principal performer and several other singer-songwriters playing four-song sets. He was a Bronze Medal-winning Olympic diver, and she a tall, blonde holistic dog trainer, but now Craig Lincoln and Sabrina Schneppat have turned their attention to crafting guitar voicings and dynamic vocal harmonies.

If you’re looking for some great tunes in a casual setting every Thursday in Paso, including Thursday, April 7, look no further than McLintock’s, which hosts weekly performances by Grammy-winner Louie Ortega and Lance Robison (6 to 8:30 p.m.; all ages; free).

“Art Rock” takes on a whole new meaning when Ragged Jubilee, Candle, and San Diego-based act River City play the SLO Museum of Art on Thursday, April 7 (7 p.m.; all ages; $7 at the door). Both local acts—Ragged Jubilee and Candle—have excellent new albums out, and three potent indie acts for a scant seven bones is quite a bargain.

Check out the weird but wonderful dirty country blues rock that is The Mojo Monkeys, who play the Frog and Peach on Thursday, April 7 (10 p.m.; 21-and-older; free), in support of their newest, Blessings & Curses. “When we started, we immediately noticed our musical chemistry was the most natural thing” said singer-drummer David Raven. “We wrote 25 songs for the album [and] recorded about 20. When we tried to make it into an album, the title, Blessings & Curses, seemed to be the only theme that ran through the whole project. These songs are all pure expressions of moments; some are so different, they didn’t seem to belong on the same record. After wrestling with it for a few months we just said, ‘We like all these 13 songs,’ so we put them in the order we liked listening to them.”

The West Coast Jazz Cartel plays Friday, April 8, in the Bay Club at the Inn at Morro Bay from 7 to 10 p.m. The group features Karl Welz on tenor saxophone, Ryan Garcia on guitar, Clint Iwanicha on bass, and Mike Raynor on drums.

Frog and Peach turns up the heat with reggae act The Expanders, a vintage-sounding So-Cal act that plays in the tradition of classic ’70s Jamaican groups The Ethiopians, The Gladiators, and The Mighty Diamonds—breezy melodies, vocal harmonies, socially conscious lyrics. They’re touring in support of their new self-titled release, a dozen insta-classics, which they’ll play live on Friday, April 8 (10 p.m.; 21-and-older; free).

Rootsy Americana-bluegrass-folk is on the menu—along with a lovely selection of organic soups, salads, quiche, desserts, and fair trade coffee and teas—when Little Black Train plays a dinner show and concert on Saturday, April 9, at 7 p.m. in Sally Loo’s Wholesome Café (1804 Osos St., SLO). Show tickets cost $12 at the door (food is an additional purchase). Molly’s Revenge fiddler John Weed and guitarist Stuart Mason are joined by local mandolinist Kenny Blackwell to perform “a fun, refreshing fusion of vintage fiddle tunes, bluegrass mandolin, and songs of old-time Americana,” according to the trio.

Join killer Latin jazz act De La Bahia for a glass of wine and a night of salsa dancing on Saturday, April 9, at D’Anbino Cellars from 7 to 9:30 p.m. Also, Chance Siri from Cal Poly Salsa will be DJing during the intermissions. There’s $10 cover—$5 with a student ID.

The SLO Blues Society welcomes the always-stunning blues icon Joe Louis Walker on Saturday, April 9, with The Amazing Stupifyers opening the show (8 p.m.; 21-and-older; $20 at the door). The highly lauded Walker is a ripping guitarist who’s on the ballot for several major awards this year, including the B.B. King Entertainer of the Year (facing off against Buddy Guy, Janiva Magness, Kenny Neal, and Super Chikan); and the Contemporary Blues Male Artist of the Year (against Guy, Neal, John Nemeth, and Nick Moss). He’s touring in support of Blues Conspiracy: Live on the Legendary Rhythm & Blues Cruise. There’s a reason the SLO Blues Society books this guy every chance it gets. Don’t miss out! 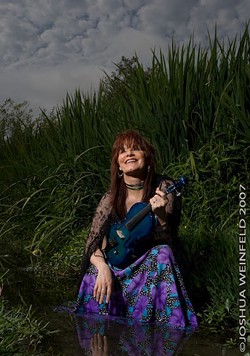 Feel the swamp heat on Saturday, April 9, when Lisa Haley & the Zydekats play the Clark Center (8 p.m.; all ages; $30 to $40; call 489-9444). This Grammy-nominated Cajun/Zydeco group is straight out of the bayou and as authentic as they come. Haley’s an amazing fiddler, dancer, vocalist, and songwriter whose 2008 Grammy-nominated song “King Cake” blew up the Billboard World Chart and the Americana movement with her lively violin and soaring, compelling “cornbread” voice. She’s been called the “Mick Jagger” of Zydeco and swamp-rock, who counts Keb’Mo’ and Little Richard among her fans.

With a four-decade-spanning career, Tret Fure had no shortage of material to draw from, but when she plays the Steynberg Gallery on Saturday, April 9 (8 p.m.; all ages; $15 presale or $18 at the door), expect to hear from her newest release, The Horizon. She started at 16, singing in Midwestern coffeehouses and campuses before. By 19, she was in L.A. to pursue a songwriting and musical career, and within a year she was performing as guitarist and vocalist for Spencer Davis, touring with him and penning the single for his album Mousetrap. In 1971, she recorded her own album with producer Lowell George of Little Feat, which led to opening gigs for the likes of Yes, Poco, and the J Geils Band.

On Saturday, April 9, head to Frog and Peach to check out Mark Adams when he plays an album release party for his latest offering, One Time Spaceman, at 9:30 p.m. The Westsiders will open the show, which is recommended for fans of The Clash, Black Keys, Bob Dylan, the Band, Velvet Underground, and Adams’ other group, Rancho Deluxe. Adams’ new record is getting plenty of airplay throughout the United States, from WSND in Notre Dame, Indiana, to KBEACH in Long Beach.

The G. Roger Bailey Scholarship Fund presents in concert at Coalesce Bookstore Roger A. Cope—instructor of guitar and director of the Guitar Ensemble at California State University, Bakersfield—at 2 p.m. on Sunday, April 10 ($20; call 772-2880). Before joining the CSUB music faculty, Roger was a member of the affiliate artist music faculty at Brevard College in North Carolina as director of guitar studies.

The SLO County Band will perform its Annual Spring Concert on Sunday, April 10 (3 p.m.; all ages; free-will donation) in First United Methodist Church (275 N. Halcyon, A.G.). Under the direction of its celebrated conductor, Leonard Lutz, the program theme is “American Music and American Composers,” with work ranging from Stephen Foster to Richard Rodgers. The band celebrates its 137th birthday this year! 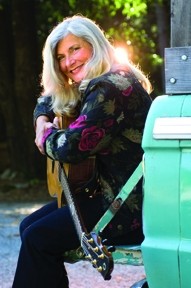 The county’s newest outdoor live music venue, the lovely SLO Botanical Garden, hosts Monterey singer-songwriter Sherry Austin on Sunday, April 10 (4 p.m.; all ages; $28 at the door; a free docent-led tour will precede the concert at 3; call 541-1400, Ext. 301, for reservations). “With three of the most popular Americana vocalists in the Bay area, the Sherry Austin Band delights their fans with their engaging stage presence, upbeat songs, and ethereal harmonies,” according to press materials. “Fronted by Sherry Austin on rhythm guitar and vocals, Sharon Allen on guitar and vocals, Tracy Parker on bass and vocals, and Dorian Michael on guitar, their music covers the range from sweet love songs to gritty, rockin’ songs about cars, trains, and love gone wrong. They sing with authority and passion; their distinctive blend of folk, country, and rock is filled with warmth and conviction.” Music in the garden and a no host bar!

If you were a HookahStew fan, you were no doubt disappointed when they disbanded a few years ago, but then you were probably excited when they reunited in 2008, when they hit the studio and emerged with Hits from the Hookah, a small collection of infectious pop-rock tunes. Now you can see them live on Wednesday, April 13, when they play a 9 p.m. show at Frog and Peach. After playing 200 shows last year, the Portland, Ore., trio returns with a new single and video for “RollerGirl,” which has gotten a lot of radio play and has been embraced by roller derby leagues across the country.