Hedges bugged because deputy 'made fun' of him

Undersheriff Steve Bolts told County Human Resources officials that he and Sheriff Pat Hedges eavesdropped on former Chief Deputy Gary Hoving because of concerns Hoving was “making fun of” Hedges behind his back and was disloyal, not because of any ongoing criminal investigation. 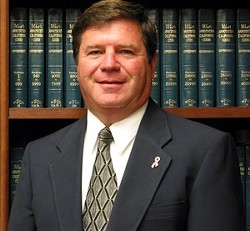 That allegation—the first to surface to directly contradict Hedges’ public statements that he was conducting a criminal investigation when he videotaped Hoving in 2006—is among a trove of details included in court documents made public from Hoving’s ongoing federal civil rights lawsuit against Hedges, the county, and Bolts.

Hoving is asking a judge for a summary judgment that would negate the need for a trial, now set for Sept. 23. The documents are contained in arguments related to that quest.

Eavesdropping is considered illegal except in limited circumstances, such as a police officer conducting an investigation. That’s how Hedges has publicly described what he was doing, saying that he was investigating allegations evidence was mishandled in a narcotics division.

The transcripts, however, give a different account. While the evidence handling was brought up along with a host of other complaints, human resources official Dori Duke gave this account to Warren:

The account is supported by two other human resources officials. Elsewhere, Duke said Bolts directly stated there was no criminal investigation involved.

The California Attorney General recently concluded an investigation into Hedges’ behavior and opted not to proceed with charges against Hedges.

Documents from Hoving’s lawsuit, however, shed light on a number of outstanding questions regarding Hedges’ acknowledged eavesdropping.

• Shortly after learning that he’d been bugged, Hoving told Duke that he feared for his safety and his life and wondered how long the bugging had gone on.

• Warren’s report, which has not been made public, found that Hedges and Bolts committed misconduct by taping Hoving without his knowledge. That’s according to a sworn deposition conducted by Hoving’s attorneys with County Human Resources Director Deb Hossli. County Administrative Officer David Edge said he couldn’t comment on the report.

• Warren’s report further concluded that he could find no evidence that Hedges was involved in any criminal investigation when he conducted the taping, according to the deposition of Hossli.

• None of the four men who allegedly came up with the idea for the original bugging—Anthony Perry, Donovan, Hedges, and Bolts—received any disciplinary actions from Hedges, although Hoving told Duke, according to the transcript, that Hedges once offered to suspend himself for one day, without pay. Again, that’s according to human resources officials.

A spokesman for the Sheriff’s Department referred calls directly to Bolts and Hedges. Hedges did not respond to requests for comment.

Bolts said he could not respond because of the ongoing case and a separate personnel matter. But, when asked about the comments attributed to him regarding the reason for the eavesdropping, he responded “I really can’t respond to that other than to advise you that what you just told me is out of context and really not relevant to the issue.”

Hoving’s attorney, Michael Stone, said in a statement that the Attorney General’s decision shouldn’t be used as a measure of the strength of Hoving’s federal case.