San Luis Obispo Mayor Heidi Harmon ran her final City Council meeting on Sept. 21 with police protection, after she received an email earlier that day of a threatening and sexualized nature that included nude photos.

"Tonight, instead of ending my term as mayor running this meeting, I'll be ending my term talking with our local police officers," Harmon said at the virtual council meeting. 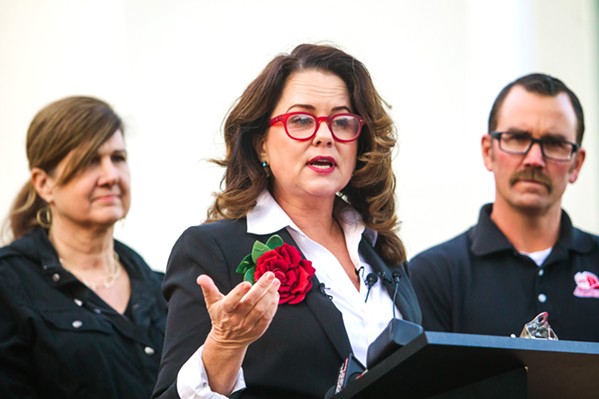 The subject line read: "I am a homeless man stranded in this San Luis Obispo and have an offer for you."

Harmon said she received the email just after posting to her Instagram page various examples of the online harassment and abuse she has received over her five-year tenure as mayor. She felt it was important to shine a light on that issue before leaving her post.

"It was extra shocking to have gone through those old posts, and then in the middle of that, get that really heinous email," Harmon told New Times. "It's violent. It's an assault, really. ... This is a pretty consistent culture of misogyny, and a lot of it does have a violent quality to it."

"Went absolutely bollocks on Gavin Newsom's throbbing knob last night and got a lil outta hand. Now my knees are fucked up," the caption read.

In another example, a direct message she received read: "I'll be keeping a very close eye on you and be there to expose you at every turn. There is no rest for the wicked."

Not all of the incidents of harassment have been virtual. In 2017, Harmon had her Pride flag slashed and burned outside her house. In 2020, a man demanding to speak with the mayor pushed through city staff at City Hall and jumped over a front desk counter on his way to the mayor's office before being tackled to the ground by City Manager Derek Johnson.

In her comments at the Sept. 21 City Council meeting, Harmon said, "I'm bringing it up because it's what's real ... and what's been happening on some level this whole time."

"And it's unacceptable," Harmon said. "I really want to call up this community and this council and everyone to really take a stronger stance ... . It's unacceptable and it's creating a culture of violence."

Harmon said her experience with harassment and sexism discourages other local women from running for office.

"I cannot tell you how many young women have told me, women in general, that they will not run for office because of how they've seen me in this role. That's incredibly dangerous, and we need to do something about it," she said.

Other SLO City Council members came to Harmon's defense in response on Sept. 21.

"I am so sorry that this is happening to you and you're right, it's wrong and not fair. It makes me very, very angry," Councilmember Carlyn Christianson said.

In her final comments from the dais, Harmon, who's leaving office a year early after taking a position at a climate-advocacy nonprofit, thanked the community for its support. She said she feels "lucky to know that I made a difference" as mayor.

"I try to always do the right thing. I don't always get it right," she said. "I try to do right, not be right, but I think this is the right thing for me to set this down. Thank you for understanding that."

"I hope the young women who are telling you that they look at you and think, 'I'll never do this,' might step back and reflect, as I do and my daughters do," Dietrick said, "and feel inspired to continue in this fight ... and continue to represent everything you have with integrity, and pride, and grace." Δ