I’m back! Did you miss me? What’s that? You didn’t notice I was gone for four freakin’ weeks? Fine! I didn’t miss you either, but I hope your New Year’s resolution was to see more live music this year, though this first week of the year looks like it’s starting out like a lamb. Still, there are a handful of excellent shows happening out there.

Let’s start with local rap heroes and double New Times Music Awards winners Public Defendaz, who’ll be joined by Vice Versa on Saturday, Jan. 8 (7:30 p.m.; all ages; $9 presale or $10 at the door), at SLO Brew. These talented musicians and emcees “represent their personal views through the lifestyle and music of hip hop,” moving through a number of styles. Around since 2006, the group consist of Tha Oktapu$, Royal, j4rd, Taktical, and IyayI da Cali Kid. They say their purpose is “to bring audiences a quality of music that directly reflects the word of the people, while constantly evolving with the times and sounds. By combining the driving forces of lyrical wordplay and versatile productions, this group of artists from various regions of California bands together to preserve their cultures’ true elements.”

SLO Brew is also hosting Tribal Seeds on Wednesday, Jan. 12, (7:30 p.m.; all ages; $13 presale or $15 at the door), with Fortunate Youth opening the show. Tribal lists Bob Marley, Steel Pulse, and Midnite as influences, adding that they strive to bring “a refreshing rock vibe to roots style reggae music.”

I’m no Cassandra, but I foresee a very big year for SLO Brew.

Austin’s music scene is pretty hard to beat. The progressive Texas college town has become a Mecca for musicians of every stripe, like Megafauna, an experimental psychedelic rock power trio fronted by chief songwriter Dani Neff, who can sound like P.J. Harvey meeting Pavement in Radiohead’s basement to smoke a bowl with Led Zeppelin.

The group recently embarked on its sixth national tour and is now traveling west in support of a much awaited debut record Larger than Human, which was recorded at four Austin studios with Eric Wofford, the man behind the Black Angels’ debut album, Passover.

Neff kills on the guitar. In fact, the San Antonio Current jokes that she “pulls off several of the moves that eventually required Eddie Van Halen to undergo hand surgery.” This is definitely a band to watch in the alternative scene.

They’ll appear at Last Stage West at 9 p.m. on Saturday, Jan. 8, at 9 p.m. with Brooklyn-based act the Suite Unraveling, fronted by the commanding playing of Lily Maase, last year’s champion of the acclaimed “Shred for Your Life” competition at Webster Hall. All About Jazz, Teen Vogue, Nylon Magazine, and The New York Times have written about Maase’s guitar skills.

I’m also pretty certain the Steynberg Gallery will continue to anchor “Uptown,” the east side of downtown that runs from Santa Rosa toward Grand Avenue.

This week, for instance, the café (which also has beer and wine, just like a European-style café) will be host to a couple noteworthy concerts starting with Jay Horn on Saturday, Jan. 8 (7:30 p.m.; all ages; $10). If you’re a fan of Kenny Loggins, James Taylor, or John Denver, you’ll probably agree with Horn’s bio, which says he’s “creating music that inspires people to live life fully … [with] his powerful tenor vocals with heart-felt original songs,” which blend “rock, folk, country, blue-eyed soul, and spiritual new-age to uplift and connect to his audience.”

As usual, Tuesday, Jan. 11, will feature Steve Key’s Songwriters at Play showcase, this time with featured performer Ida Gard of Denmark and John Schmitt of New York (6:30 p.m.; all ages; $5). Gard says strong women inspire her. “Think Fiona Apple meets Zap Mama meets classical European music,” she said. She’s also funny, noting she writes what she’s knows: “That’s why the songs on the album deal with issues like addiction, sexuality, and the urge to screw things up.” Schmitt’s songs are a direct reflection of his experiences growing up in Buffalo, N.Y. His 2010 album Ophelia shows “how life in the city has affected Schmitt, now a resident of Brooklyn, as he takes us along for many stories of life, love, loss, and coffee consumption.”

I’m not a fan of prog-rock, the blistering guitar-style favored by the likes of Steve Morse and Steve Vai, but I can tell when somebody knows how to play it well, and Travis Larson is the real deal. The guy’s a first-class shredder, which is why he’ll be playing the NAMM convention, the premiere music industry event later this month in Anaheim. But before he goes there to show off his chops, he’s got two local gigs, on Thursday, Jan. 6, at Frog and Peach with slide guitarist Robert Richter of Portland (Richter at 7 p.m.; Larson goes on at 8:30), and again on Friday, Jan. 7, at The Pourhouse at 9 p.m., a show that doubles as his bassist Jennifer Young’s birthday bash. For those about to rock, I salute you!

For those who prefer something a bit more classic, may I direct your attention to W. Terrence Spiller’s Friday, Jan. 7, piano recital at 8 p.m. in Cal Poly’s Spanos Theatre? The Music Department chair’s benefit recital will include works by Brahms, Hindemith, Debussy, and Liszt. Tickets cost $6 for students and senior citizens, and $10 for the public. Proceeds will benefit the Cal Poly Music Department Scholarship Fund. 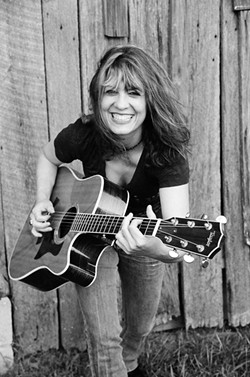 When one door closes, another opens, as evidenced by Steve Key’s Songwriters at Play showcases, which used to happen at Rose’s Landing and Spyglass Inn, but now doesn’t. Their loss, because Key found a new venue (in addition to his two regulars: The Steynberg Gallery on Tuesdays and The Porch on Thursdays). And the winner is (insert drum roll) … Sculpterra Winery, which kicks off with a doozy on Sunday, Jan. 9, when L.A.-based singer-songwriter and rock guitarist Janet Robin plays the 1 to 4 p.m. showcase. She sometimes backs Michelle Shocked and Fleetwood Mac’s Lindsey Buckingham, so you know this gal can play. I mean, come on, she started as a teenager taking lessons from Randy Rhoads (Quiet Riot, Ozzy Osbourne) and became the lead guitarist for the all-female rock band Precious Metal. Other performers will include Jimmy Townsend, Gary Garrett, Craig Louis Dingman, and a closing set by Con Brio, the San Francisco-based acoustic jazz/blues quintet. There’ll be a tip jar, but otherwise this baby’s free!

Booker T. & the MGs tribute act The Booker Tease plus Man/Miracle (sons of these hills, living in Oakland) plus Jake Mann (from San Francisco) plus Sparrow’s Gate (from Inter-Stellar orbit)!!!! Holy crap! Now that’s a line-up! Check it out at Sweet Springs Saloon on Sunday, Jan. 9 (9 p.m.; 21-and-older; $5). “Arnold, our keyboardist, broke his left-hand middle finger,” said Tease guitarist Keith Kurczewski, “so it’s going to be interesting not only seeing him motor though our set, but also to see if anyone gets ticked off that he’s flashing the most-popular bird the whole set! It’s gonna be awesome!”

Portland collective Rare Monk is heading to the Frog and Peach on Wednesday, Jan. 12, bringing their continued exploration of pop, rock, psych, jazz, and funk. The quintet has a violin—always an unusual touch in a rock act! “Rare Monk won the KWVA Battle of the Bands in Eugene and has since performed a number a shows including the 2009 Eugene Celebration, 2010 Willamette Valley Bike Music Fest, and the 2010 Whiteaker Block Party,” said their bio. “The group just recently finished up their first EP, Falconer’s Folly, and plans to return to the studio as soon as possible.”