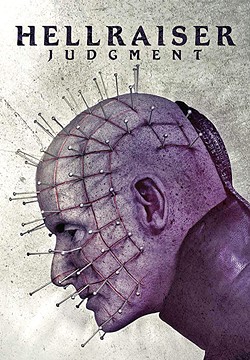 Horror movie fans know better than most how depressing it can be to watch a once great movie franchise slowly circle the drain.

Whether it's Friday the 13th, A Nightmare on Elm Street, Scream, or any other popular scary flick series, the diminishing returns of quality and scariness with each new sequel is so common in this genre that it's taken as inevitable.

In no other horror movie series is this more apparent than the Hellraiser franchise. The original movie, 1987's Hellraiser, is a near perfect horror movie: a bloody, disturbing, hellish masterpiece that introduced viewers to the iconic and terrifying Pinhead. Sadly, none of the franchise's subsequent sequels were ever able to live up to original. It seemed with each successive sequel the plots got sillier, the acting got worse, and Pinhead and his fellow demonic, leather-clad Cenobites became less frightening.

Hellraiser: Judgment is the 10th entry in the franchise, released in 2018. The film follows three police detectives who, while on the trail of a brutal serial killer, come into contact with Pinhead and the otherworldly forces of hell, all of whom are tied into the killings.

The film has a lot of flaws, the biggest being the plot itself. Much of the movie is spent with detectives as they argue and investigate an uninteresting and generic serial killer case. The scenes of Pinhead, the Cenobites, and a new batch of twisted deformed denizens of Hell called the Stygian Inquisition, are few and far between. The film was made on an incredibly small budget (only $350,000), and it clearly shows in this aspect.

However, horror fans shouldn't write this film off completely. The few scenes we do get with Pinhead, Inquisitors, and the hellish and surreal nether-realm they inhabit are genuinely disturbing, gruesome, and horrifying. The set design of these sequences pulls from other horror movies like 2000's The Cell and 1995's Seven, and even contain nods to the original movie, including an appearance by "The Chatterer" one of the Cenobites who appeared alongside Pinhead in the original film. These sequences recall the flavor of the first movie, and leave one wishing that there were more of them in Judgment.

Taken along with horror movie Easter eggs like the cameo by Nightmare on Elm Street actress Heather Langenkamp, it's clear that writer and director Gary J. Tunnicliffe cares about the Hellraiser franchise but was hampered by a lack of budget and other production difficulties. Hellraiser: Judgment is worth a watch because parts of it show promise, possibility, and a direction to revive one of the best horror franchises out there, if only the studio that currently owns the rights to the property, Dimension Films, would be willing put some real money behind it. Will we see an 11th film, and will it build on the bright spots of Judgment? We can dream, can't we? (81 minutes) Δ