Industrial hemp farmers are pooling their resources to sue San Luis Obispo County, attempting to overturn a controversial new ordinance that both growers and county officials have said is a virtual ban on local hemp production. 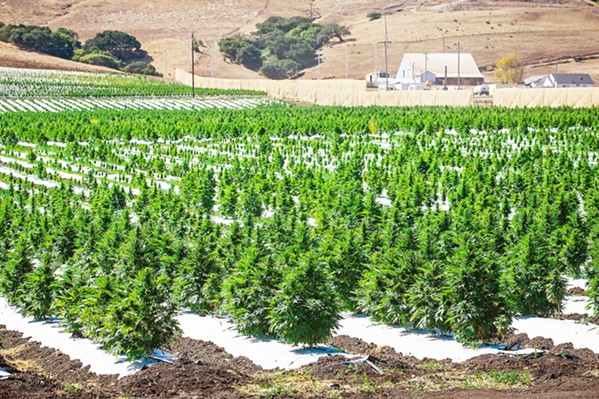 The SLO County Board Supervisors passed a hemp ordinance on May 5, and according to stakeholders, it severely limits where the crop can be farmed locally.

"In my estimation, their decision will essentially act as a prohibition," SLO County Assistant Agricultural Commissioner Marc Lea wrote in an email to farmers on May 5, according to the lawsuit, "because I don't think there are very many sites that exist in the county that can possibly meet all of the requirements that they approved."

A group called the Coalition for Agricultural Rights filed the lawsuit in SLO County Superior Court on May 27. Members include farmers "who have invested significantly in the hemp and agricultural industry" in SLO County, according to the petition. The suit asks a judge throw out the ordinance and temporarily halt its enforcement while the case is pending.

"The coalition is in support of reasonable regulation of hemp," the petition reads, "but the hemp prohibition goes too far, violates numerous laws, and ignores public input from residents throughout the county."

The Board of Supervisors passed its hemp rules following a yearlong moratorium on the crop, which was put in place to allow the county time to craft a permanent hemp ordinance. The ordinance now under fire requires a 400-acre or larger parcel to grow outdoor hemp, mandates 2,000-foot setbacks from farms to property lines, and bans hemp from the Edna Valley, among other rules.

"Imposing a 2,000-[foot] setback on a square 400-acre parcel leaves the property with 0.7 acres to cultivate hemp," the lawsuit claims. "The grower, in other words, would be limited to growing hemp on 0.175 percent of the property."

In passing its ordinance, the Board of Supervisors scrapped a more permissive ordinance approved by the Planning Commission. That ordinance, written in collaboration with an agricultural subcommittee, set a 10-acre parcel size minimum for outdoor grows.

"The board arbitrarily and completely redrafted the proposed permanent ordinance after all public comment had concluded and without staff or Planning Commission review or analysis," the lawsuit states.

The suit claims that the new rules "functionally eliminate the industrial hemp industry within the county" and "are the product of unlawful decision-making by the Board of Supervisors."

The coalition alleges that the board's policy violates the county general plan, Right to Farm Ordinance, and California Environmental Quality Act (CEQA). The group further claims that the regulations lack sufficient evidence to justify them. As an example, the lawsuit claims that none of the 16 active commercial hemp grows in 2019 received odor complaints, "and yet the hemp prohibition arbitrarily applies to all of these farms."

"County staff conducted no further environmental analysis, no further general plan consistency analysis, and no further fact-finding to support the modifications to the draft permanent ordinance," according to the lawsuit.

SLO County is disputing the allegations in court. In a statement to New Times, SLO County Counsel Rita Neal challenged the hemp industry's description of the ordinance as a ban.

"In fact, the county has already received several hemp registration applications and continues to receive inquiries from parties interested in cultivating hemp under the new ordinance," Neal said.

According to court documents, SLO County has received four hemp applications as of June 12.

Neal added in her statement that the board's policy changes "were necessary to minimize the impacts associated with this new crop." She said the policy "was consistent with planning and zoning law and CEQA."

A hearing on the lawsuit's request for a temporary restraining order is scheduled for June 23. Δ